At The Shelter That This Cat Lives And Works In, He Made A Very Unlikely Friend!

Pumpkin is an adorable little cat living in a shelter in Tennessee. His compassion and nurturing nature have made him an official member of the shelter’s staff. His job? It’s to do what he does best… love and comfort the animals that are brought into the shelter.

One day his compassion was put to the test. A goose that had been injured after being hit by a car was brought to the shelter. The goose was, understandably, distraught. Pumpkin wasted no time! He hopped onto the table and started comforting the goose with some kitty cuddles. Pumpkin’s show of love immediately calmed the goose down. The human staff members at the shelter were amazed. After discovering the fact that Pumpkin’s compassion really knows no bounds they made a decision that would end up altering Pumpkin’s life. 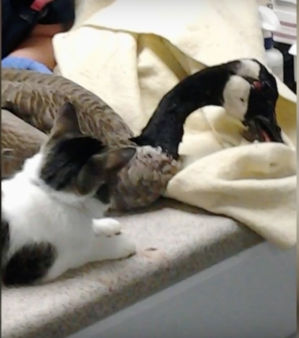 Julie, a human member of the shelter’s staff, decided to bring in a companion for Pumpkin in the form of a dumbo-eared rat named Batman. At first, Julie and the other human staff member were a hesitant. They knew that Pumpkin was a kind and loving cat, but they weren’t sure how he would take to having a rat as a friend and co-worker. But Pumpkin surprised them yet again by how much love he holds in his little heart. Upon meeting Batman, Pumpkin welcomed him with open paws. He immediately took Batman under his wing and the duo formed a friendship like no other!

Together, Pumpkin and Batman live, work, and play together. The duo completely ignores the idea that cats and rats cannot be friends.