Like many places of worship, the Canterbury Cathedral is streaming virtual church services from its garden to keep parishioners safe. But one curious cat decided to interrupt this weekly broadcast, and his adorable disruption is going viral.

Leo, a resident cat, clearly loves the idea of hosting church services in the garden, which is filled with birds, mice, and colorful flowers. But, being a cat, Leo is also easily distracted, which is how this furry feline — apparently bored with this week’s sermon — decided to mix things up by climbing inside the priest’s robe. 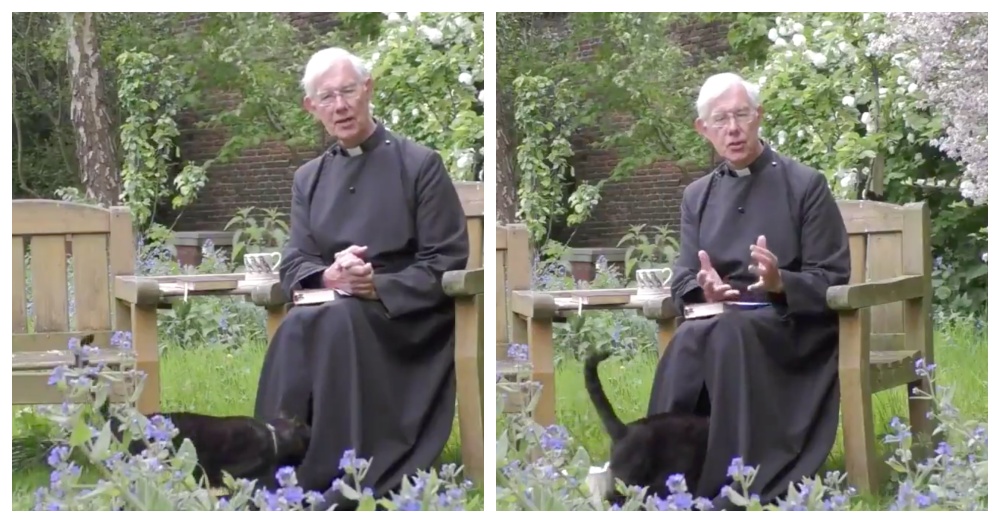 Thankfully, the Canterbury Cathedral shared this hilarious moment on Twitter, where the video quickly went viral. “Leo the cat has been getting up to mischief again! Did you spot this moment in Morning Prayer last week?” they wrote.

You can see Leo stealthily approaching from the priest from off-screen, where he initially blends in with the garden flowers. But the priest keeps his attention trained on the camera, which only encourages the mischievous cat to proceed with his plan. When the cat’s sure no one’s looking, he cooly strolls inside the priest’s robe, presumably looking for a nice place to nap.

Leo the cat has been getting up to mischief again! Did you spot this moment in Morning Prayer last week? #Caturday pic.twitter.com/xZXDsAQxWW

We don’t know what happens next, because this hilarious clip is only 6 seconds long. Even so, this mischievous cat has probably done his father a huge favor, because other WFH professionals photobombed by their pets have experienced a subsequent bump in viewership. If those cases are any indication, Leo’s antics could cause church attendance to soar.