Maude the porcupine has never lived an ordinary life. As a baby, her mother died of neurological issues. Fortunately, her mother had been in the care of wildlife rehabilitator and founder of the BEAR League, Ann Bryant. However, Maude was a complete surprise. The Lake Tahoe animal rescuer went to Mia’s enclosure to check on her and discovered that she had given birth to Maude. Bryant said she didn’t even know the porcupine was pregnant! 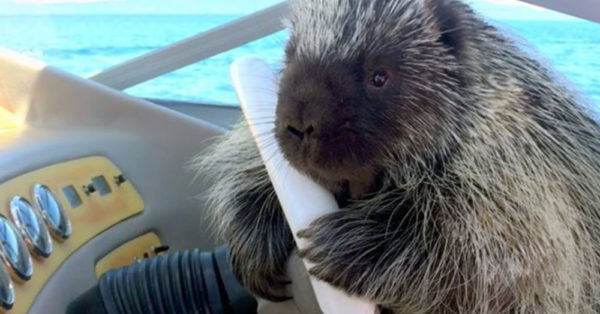 From that day on, Maude was part of the family. In fact, because the baby porcupine became so comfortable with the property that Bryant said she will live their permanently.

“Because she’s so friendly and was raised in a home, she would go up to dogs if I tried to release her,” Bryant told The Dodo. “So she is under permanent care and lives here … [Maude] goes with me to a lot of places. I think she thinks she’s a dog.” 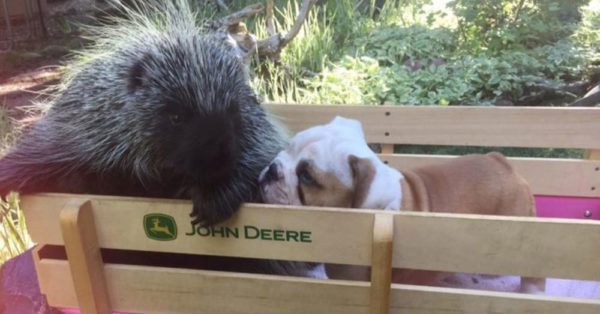 So, after she thinks she is a dog, it is only proper that her best friend is a dog, right? After the sudden passing of one of her beloved dogs, Bryant decided to bring home a new puppy, 8-week-old MacArthur (or Mac for short). It was Maude that immediately took to the newest member of the family. Mac was a little more apprehensive about the potential friendship.

“Everything here was new to him, especially the porcupine,” Bryant told The Dodo. “At first he just stared at Maude … and backed away.” 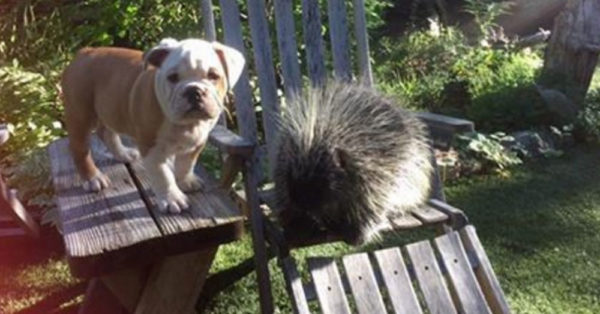 Eventually Mac gave Maude a chance and the two were soon inseparable.

“They all hang out together out in the garden and in the house and each of them is convinced there is absolutely nothing odd about this,” Bryant said. “I firmly believe they think all households have bulldogs and porcupines living peacefully together.”

The two spend their time exploring together, going on walks, playing with Maude’s favorite wagon and being absolutely adorable!

You can keep up with the adventures of Maude on her Facebook page.