People Were Trying To Save This Stray Dog. Then, He Began Running Towards The Freeway…

The rescue group, Hope For Paws, thought that rescuing this stray poodle might be an easy task. But when he started running towards a multiple-lane freeway, they realized it might be harder than they thought. The poor pup was dodging in and out of traffic, while the rescuers continued to try and keep him in their sights. They enticed him with hamburgers to come over to them, but this dog was absolutely petrified. He ended up running into an enclosed auto shop, where the rescuers knew that he had no way of escaping. However, everybody knows how well cornering a dog could go, either really good or really bad. Luckily for them, it went well, although it wasn’t the smoothest of rescues. Even though the fence was closed, there was a tiny hole that he could’ve escaped through. That’s when one of the rescue members did the un-thinkable, by grabbing his tail! Although you never want to grab a dog’s tail, especially when he’s that scared, she had to resort to desperate measures. 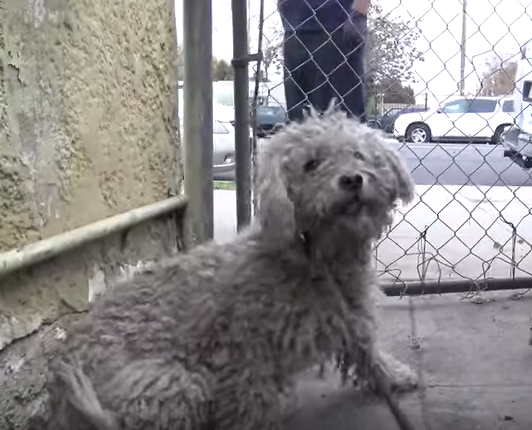 For the exhausted poodle, it’s a good thing she did. The hero was able to stop him from escaping and brought him to a hospital for treatment. The dog, now named “Sailor”, had a foster family waiting to take care of him as soon as he was out of the hospital. He currently still lives at the foster mother’s house, but is trying to discover his forever home. If you would like to apply to adopt Sailor, please check out the Smooch Pooch website.