Sometimes in life, we end up panicking over nothing. We can only imagine the panic that police officials in Spain must have felt when they received numerous calls about a ferocious lion wandering the streets of the town, Molina de Segura.

I mean, I would’ve been panicking because it’s not every day there is a lion on the loose. When the police got to the scene, we can only imagine the relief that flooded their minds when the “lion” just turned out to be a giant dog. It turns out that the dog just looked like a lion because he’d been shaved to look like one. Thank goodness the police didn’t open fire on the poor confused canine.

After no doubt laughing in relief, the police officers took to social media to share the hilarious mistake – which received 7,000 likes on Twitter.

After getting the dog checked out – and you’ll be happy to know the dog was in fine health – the police were able to reunite it with the owner. Even though it was reunited, there was never an explanation as to why the owner chose to shave their dog in this manner. Guess that’ll forever remain a mystery. 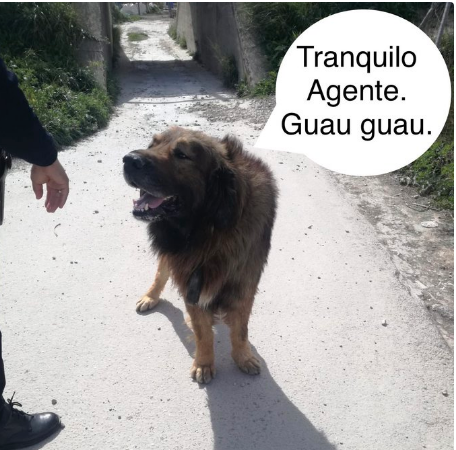 A spokesperson for the police said to the Huffington Post, “We’re investigating and waiting for some results. We don’t know the motive for shaving it that way. For now, there’s no justifiable motive. We have to confirm the vaccines and documents are correct, but fortunately, the dog is fine.”