The internet is full of unlikely animal companions. They’re sweet and heartwarming and perfect reminders that friendship has no limitations. And one of the cutest friendships happens to be between a police dog and two dolphins.

In the video, police dog Mako can be seen bonding with two very curious dolphins. The canine peers over the side of the water’s edge in order to get a better look at the two marine mammals. As enthralled as Mako is by the two dolphins, they’re equally as captivated by him.

It’s impossible not to smile watching the two dolphins splashing about in the water as Mako runs up and down the side of the riverbank. It is clear that he really wants to get closer to them. There is no doubt that if his handler wasn’t holding his leash, the playful pooch would have launched himself into the water. 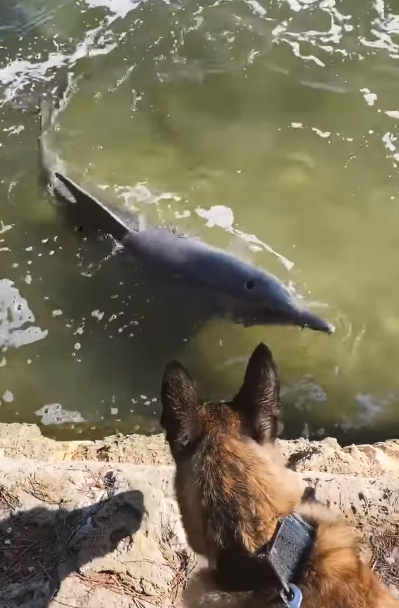 The officer knew it too, as they could be heard in the background of the video giggling at the dog’s reaction. The Western Australia Police Force posted the video to their Facebook page where it quickly gained thousands of likes. The Facebook caption simply stated, “Watch this heart-warming encounter unfold as PD Mako meets some curious dolphins in the Swan River.”

Loads of people were enthralled by the video, which was shared on the 9th of December, and the clip quickly accumulated tons of comments. Many people thought it was just too cute to put into words. One commentator even shared that they’d personally seen dolphins swimming in the Swan River and had pointed out that they seem to enjoy interacting with people. Someone else also had a personal story, writing that their own blue heeler dog was playing near an estuary when it was approached by some friendly dolphins as well.