Poor little Mama Pickles was in desperate need of help when she was found in early September, wandering around alone. The 2-year-old pit bull was heavily pregnant, and animal control officers were quick to get her off the streets as they attempted to track down where she might have come from. They managed to find her owners, but when they contacted them the officers were informed that the owners didn’t want Mama Pickles anymore, and were happy to leave her at the shelter. 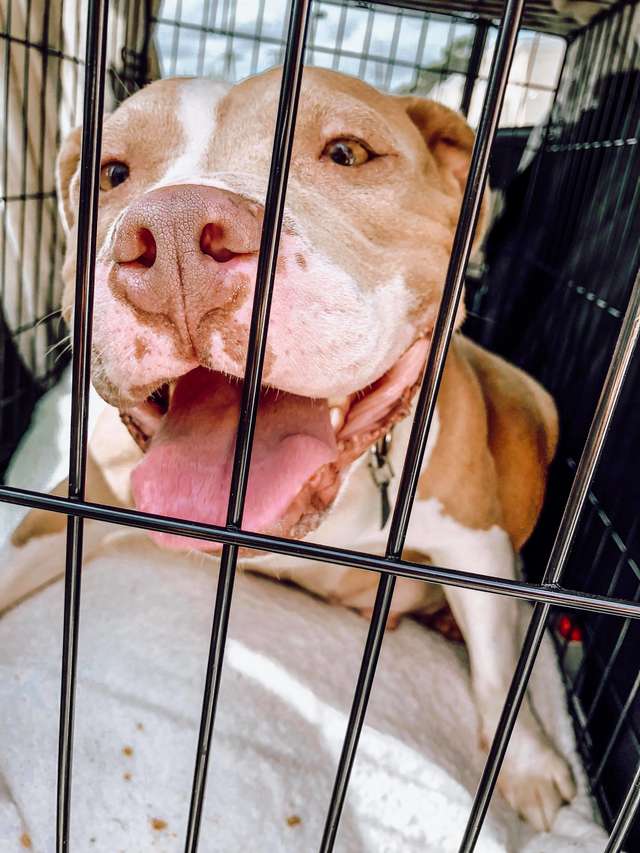 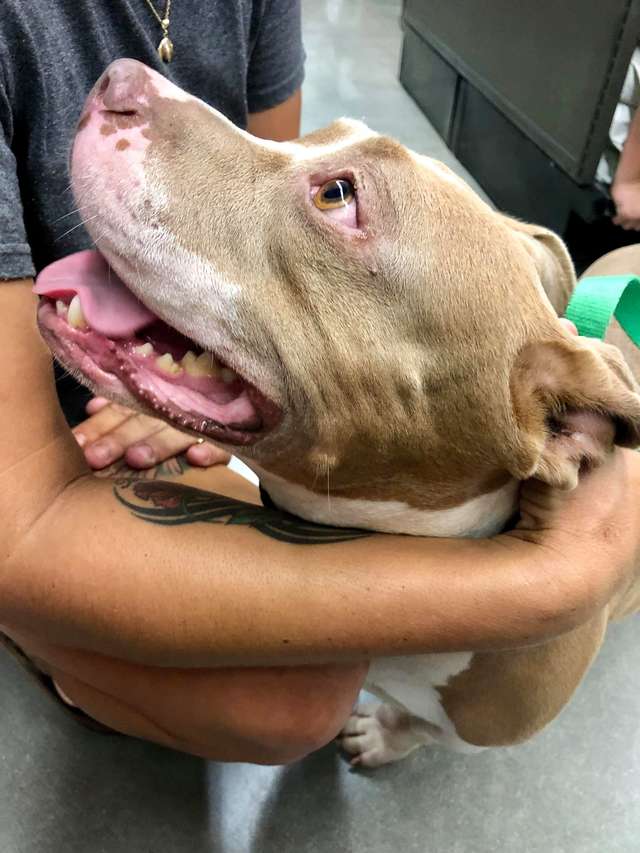 Since Mama Pickles was super pregnant, she required more specialized care than what the shelter could provide for her. Luckily for her and her rescuers, she was taking in by the Pits and Giggles Rescue, who happen to specialize in caring for both pregnant and nursing mothers and their puppies.

The very sweet Mama Pickles was so lovely and excited to make new friends with her new rescue members and couldn’t help but get excited and cover them with doggy kisses. She didn’t let her huge belly stop her from getting happy, despite that it did make it a little harder for her to move around. 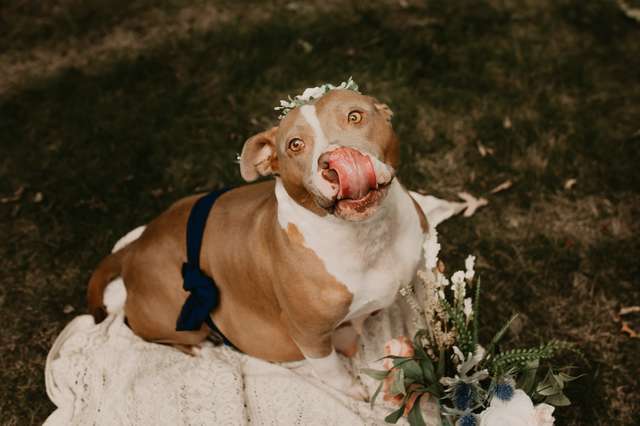 Lauren Casteen Sykes, a volunteer with Pits and Giggles Rescue, told The Dodo, “She is a ‘pit bull in a china shop.’ Mama Pickles is all tail wags and smooshy kisses and must be underfoot and in your space at all times! She is definitely a ‘velcro pitty,’ and certainly has a little bit of mischief in her eyes.”

Sykes also happens to be the owner of Enchanted Hills Photography, and she volunteers her time taking pictures of the dogs and puppies at Pits & Giggles Rescue in order to help get them adopted. The minute that Mama Pickles arrived, everyone knew she would be the subject for a maternity photo shoot — and the results were beyond the cuteness that whatever anyone imagined. 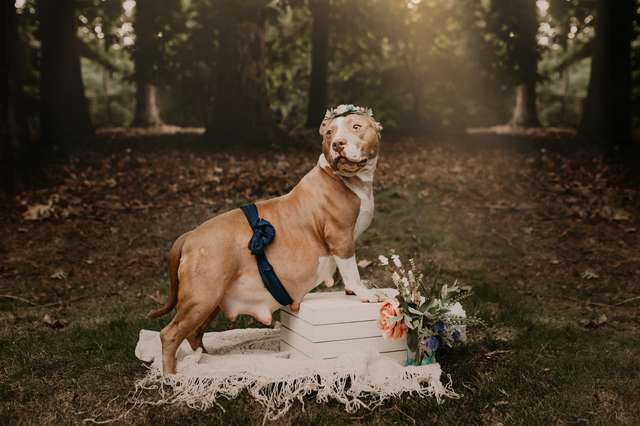 “She was so excited she could hardly sit still,” Sykes commented. “She loves affection and treats and was happy to participate! The hardest part was getting her to stay because she loves people SO much!”

Turns out that Mama Pickles was quite the little diva – she had everyone cracking up during the photoshoot as Sykes was trying to get Mama Pickles to pose for her pictures. Mama Pickles brought her A-game, striking the best poses ever, but then getting a little off balance with her silly personality and giant pregnant belly. 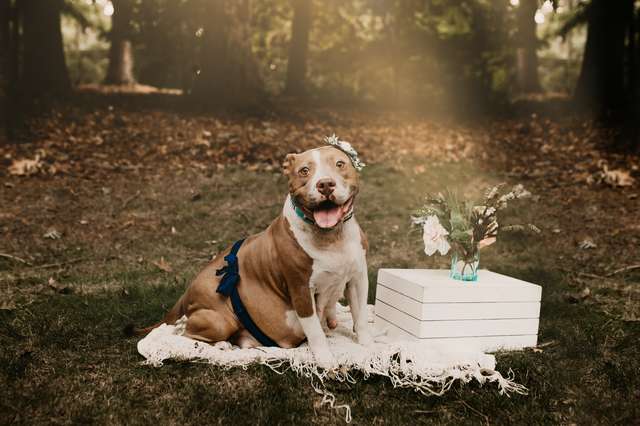 “It was hilarious,” Sykes recalled. “She is ALL belly and a bit clumsy, so getting her posed was not difficult, but getting her to sit still long enough to get a picture was no easy task! Her bows were crooked, falling off and tripping her up — we couldn’t help but laugh, she’s such a cartoon!”

Even with all the silliness and distractions, Sykes managed to get some adorable, as well as stunning pictures of the pregnant mama-to-be. Sykes was so happy that Mama Pickles would soon be getting the love that she deserved.

“She’s quite the model. Her legs are certainly too short for the runway, but she was really loving all the attention and affection,” Sykes said.

Once the photoshoot had wrapped up, there was nothing left to do but wait for the puppies to arrive. And the wait wasn’t long at all. Over the weekend, eight very healthy little girl puppies arrived into this world with Mama Pickles as their proud mother. 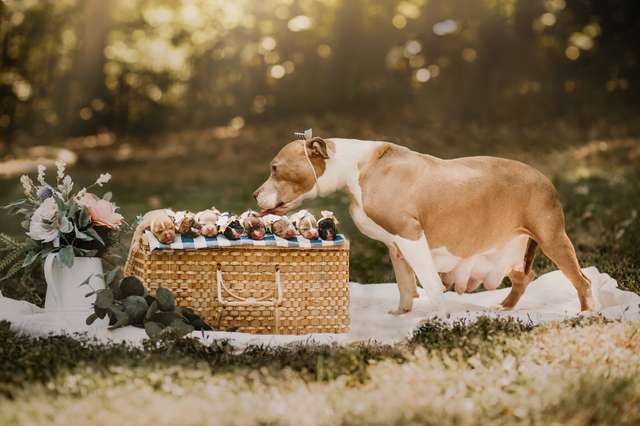 After give mother and daughters time to rest, relax, and bond, Sykes – along with everyone at the rescue – got the family together for a newborn photoshoot. It was only fitting that such a fabulous maternity shoot get an equally wonderful follow-up. No one was more proud than Mama Pickles, who proudly posed beside her newborn puppies. 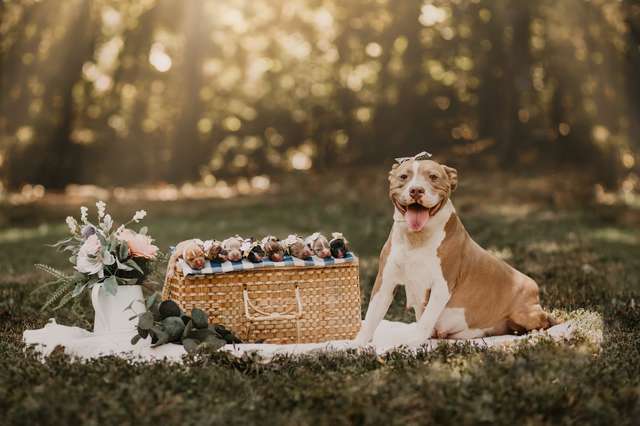 Mama Pickles was proving to be the best mother ever, making sure that her babies were safe and cared for the entire time. Everyone was so touched by how well she and her babies did.

Even though the pictures were adorable, it will be a little while before Mama Pickles and her puppies can be put up for adoption in order to find their forever homes. But until that day comes, they will undoubtedly get spoiled rotten by all those volunteers at the rescue who are so happy to be helping Mama Pickles on her journey to the second chance in life that she deserves.

Sykes added, “This girly was clearly used repeatedly for breeding and we’re excited to make sure this is her very last litter.”

We are so excited for Mama Pickles and her puppies to find a loving forever home that they deserve.