In South Philadelphia, there is a feline that has been making the rounds on social media. He isn’t doing it because of any typical reason why cat videos go viral, it seems as if he has unique skills when it comes to playing the piano.

The 7-year-old tabby named Winslow likes to play the piano when he’s hungry. It all started when the cat was getting a little heavy so his owner tried to put him on a diet. He wanted food so much that he would run around screaming.

Winslow’s owner, Kate Nyx, came to realize that 2 meals a day were just not enough for the feline. It may have been enough sustenance, but he wasn’t standing for it.

That is when Nyx pulled out an old toy piano that Winslow had a fixation on in the past. She started putting some snacks into smaller portions and he would have play for each of them.

After the videos were posted online, Winslow quickly went viral and became an Internet superstar. His musical abilities seem to be built into him because Nyx is also a musician. 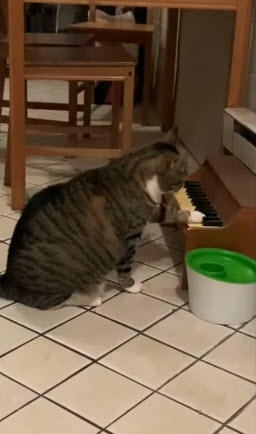 “Somehow this 26-second clip of my cat playing piano has gotten farther than anything I ever made,” says Nyx in the video.

She also said that Winslow got on the radio before she did and he even has a single on Spotify.

She speaks about how music has caused Winslow to grow up. She refers to him as a “chaotic gentleman,” although he is also refined and dignified.

Winslow has a music video and his song, “Bean Gotta Scream” is quite popular. A new single is now being worked on about eating greens. That’s interesting, because Winslow loves spinach, even though he is a little chunky.

The good news is, all of the piano playing and his new diet has helped Winslow to lose 22 pounds. It seems as if will see more of these videos as time goes by.