An LA dog boutique, Bark n’ B-tches, markets itself as the country’s “first humane pet shop,” but video of an employee grabbing a dog by its neck and throwing it onto the floor have called that claim into question.

The video, which was surreptitiously filmed by a customer and quickly went viral, opens with with a fairly benign scene of rescued dogs and patrons milling about the Fairfax neighborhood store. But suddenly, a minor dog fight breaks out, causing some of the pups to start yelping and barking. 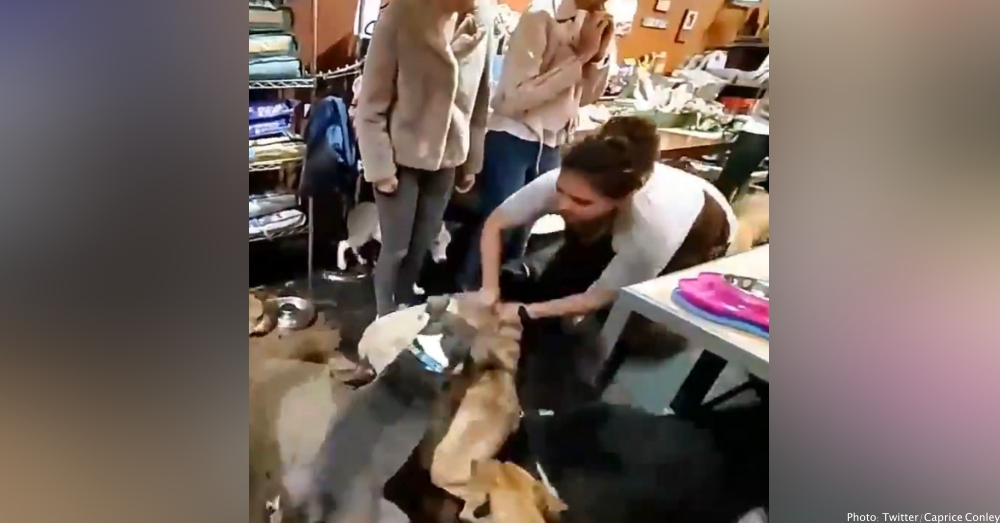 “Hey, cut it out. Stop!” one of the employees yells at of the canine instigators, explaining that “he’s fighting with everyone.” Even so, there is absolutely no excuse for what happens next. And, we should warn you, the video below is very disturbing.

“Oh my god,” customers are heard whispering after one of the employees suddenly grabs the dog by the neck and throws him across the room.

“The dog basically got launched from its head, and it was upside down in the air, and came down on its head,” said Royce Thomas, who captured the whole, horrific thing on camera. Thomas, and many of the store patrons, were so disturbed that they promptly uploaded the film (which includes a loud thudding sound when the pup’s head hits the floor) to Twitch.

This was what they said on Instagram y’all… pic.twitter.com/6q2y5HwwY9

Meanwhile, Bark n’ B-tches is scrambling to convince customers that this was an isolated, one-time incident. “We will not tolerate this or any actions that put our rescues in harm’s way,” management said statement, noting that the abusive employee had been terminated. “The appropriate actions are being taken. This is NOT what we stand for.”

The store also argued that the pup has fully recovered. “The dog was playing and acting normal after this horrific incident,” the company posted. “She is at the vet right now being checked out to assure she is ok.”

My deepest apologies for this incident. The dog was playing and acting normal after this horrific incident. She is at the vet right now being checked out to assure she is ok. #rescuedogs #inexcusable #rescuedogsrule https://t.co/Sv2oX1YdcG

“I just want you to be rest assured that all actions will be taken to make sure that this doesn’t happen again,” the store’s owner, Shannon Von Roemer, said in a follow-up post. The question is, can we believe her?