After Cheyenne Animal Shelter President Bob Fecht got upset with an 8-month old dog that bit an employee, he allegedly had someone use pepper spray on it.

After the shelter’s board got upset with him, he was suspended for two months.

According to Sheridan Media, Fecht was leading a training exercise with his staff when the biting incident occurred. He had made a rash decision, and did not mean to hurt the dog. 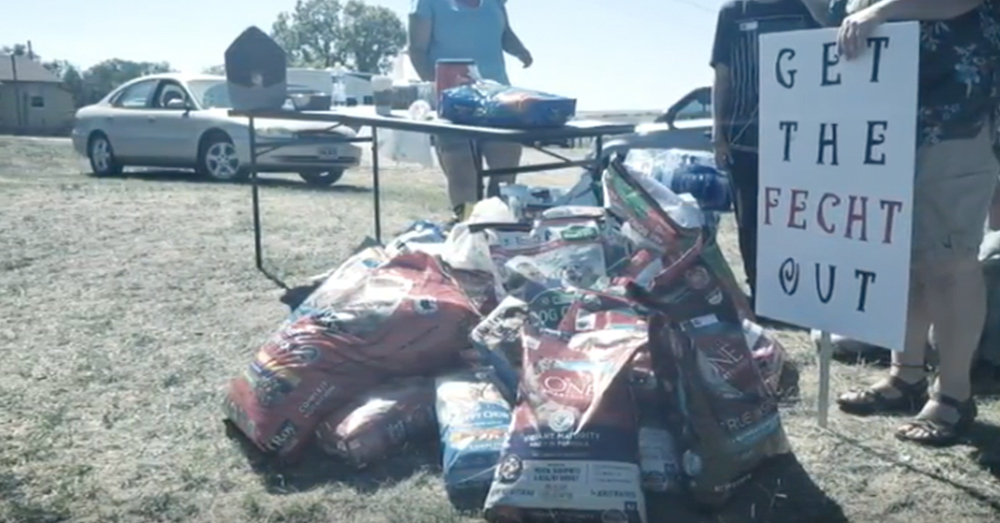 “There was never any intent to cause injury or damage to the animal involved, nor was there any intent to tarnish the reputation of the organization,” Fecht said. “While my primary goal was driven by an intense desire to protect our employees who are subjected to animals of questionable character every single day, upon reflection I realize that the decision I made was a personal and emotional reaction on my part and I sincerely regret not having considered alternatives before acting.” 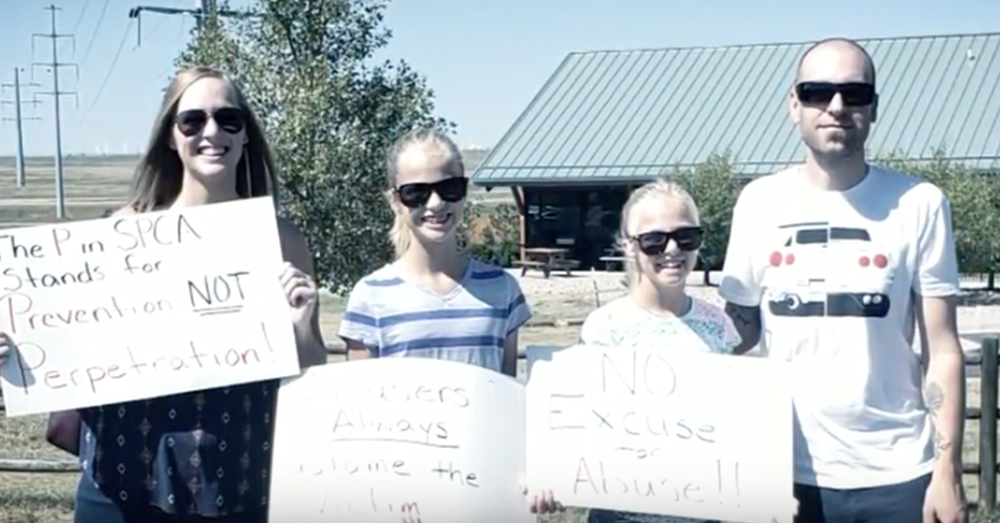 Source: YouTube/Rebeckah Marie
People have been protesting and calling for Fecht’s resignation.

Details were later offered by another shelter employee, who maintains that the pepper-spraying came a full day after the bite. The dog, named Tanner, bit shelter volunteer and foster coordinator Marissa Cox during the training exercise. According to the Wyoming News, Community Cat Program Coordinator Jay Klapel alleges that Fecht ordered animal control officers to bring Tanner and another dog to a break room in the back of the shelter, warning them, “I better not catch anyone with cell phones out or recording this.” 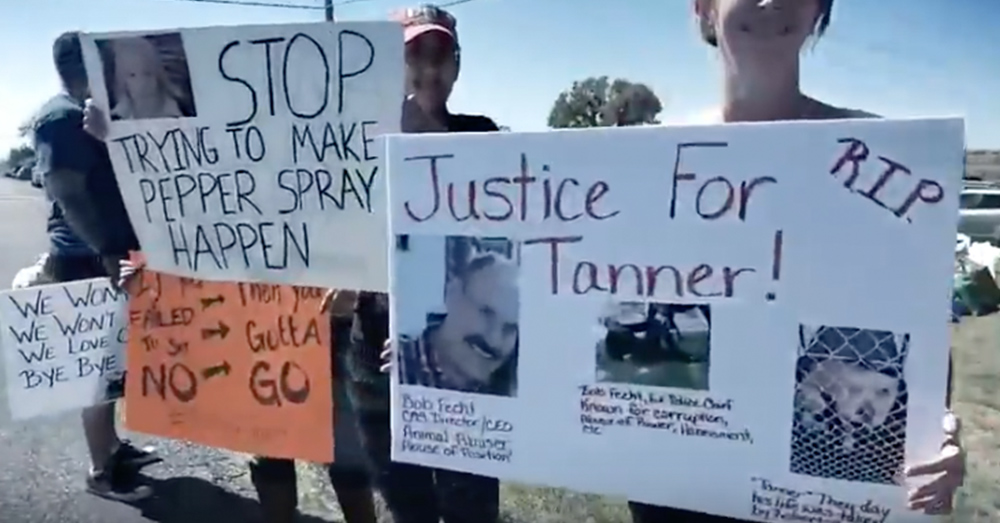 Source: YouTube/Rebeckah Marie
Tanner was allegedly sprayed the day after he bit an employee.

Klapel says Fecht offered Cox the chance to pepper spray Tanner. When she refused, Animal Control Officer Smale did it instead.

Tanner’s face was flushed with water “as he was coughing up quite a bit of blood,” Klapel wrote, and he was placed back into a kennel. A day later, he was euthanized.

“This demonstration is not only a gross abuse of power,” Klapel wrote, “but it is absolutely abuse of the animal involved – it was the cruel and intentional infliction of pain, fear and suffering.” 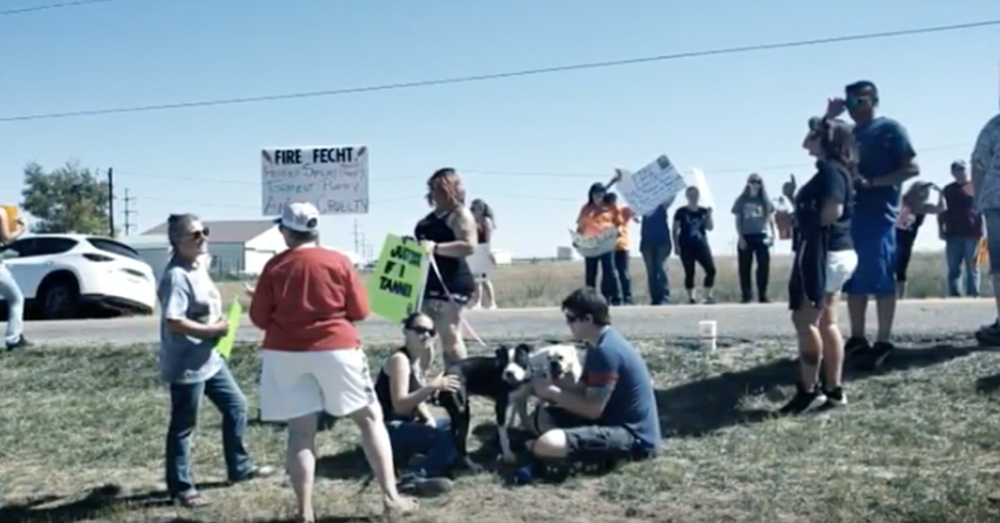 Source: YouTube/Rebeckah Marie
Tanner was euthanized 24 hours after being sprayed with pepper spray.

“After reviewing all of the facts of both incidents, the board feels confident that the decision to use an animal for pepper spray training was not made with the intent to cause harm or inflict punishment on the animal,” the board stated in a press release. “However, it also feels that the decision was rash and made without proper consideration of alternative training methods.”

The board is suspending Fecht from his position without pay for 60 days, after which he will need to present an “acceptable plan of action to restore the trust of the Shelter community in his abilities,” in order to return. 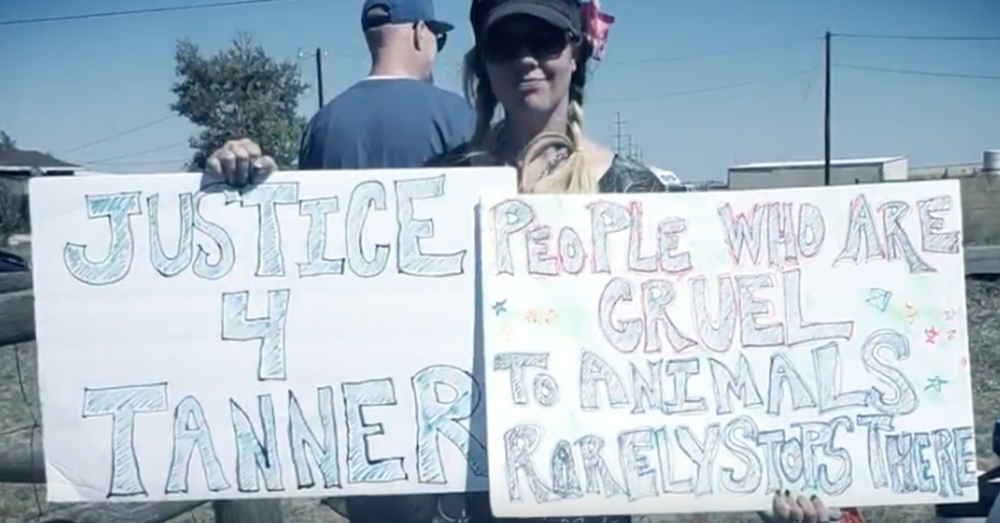 Pepper spray has a similar effect on dogs as it does to humans. There’s a significant amount of discomfort involved, with burning sensations in the eyes, nose, and mucous membranes. The pain typically lasts about 45 minutes.

According to Petplace, treatment for animals that have been pepper-sprayed involves flushing the eyes and mouth with lots of water. A visit to the animal hospital is not always necessary, but in serious cases where the eyes have been badly burned, a veterinarian should be called immediately to lessen the chance of long-term damage.

The incident at the Cheyenne Animal Shelter has caused public outrage, and at least one petition has been circulated, calling for Fecht’s resignation. Learn more in the video below.