This Abused Shelter Dog Was Recently Adopted. Now, She’s A Hero To A Little Girl

A pup, formerly known as Petunia, arrived at the Delta Animal Shelter last year with two broken legs and broken ribs. Her former human was recently convicted on animal abuse charges, according to a letter her current owners shared with the shelter on Facebook. No one could have predicted that when a good samaritan saved this dog’s life, she would soon save someone else’s. 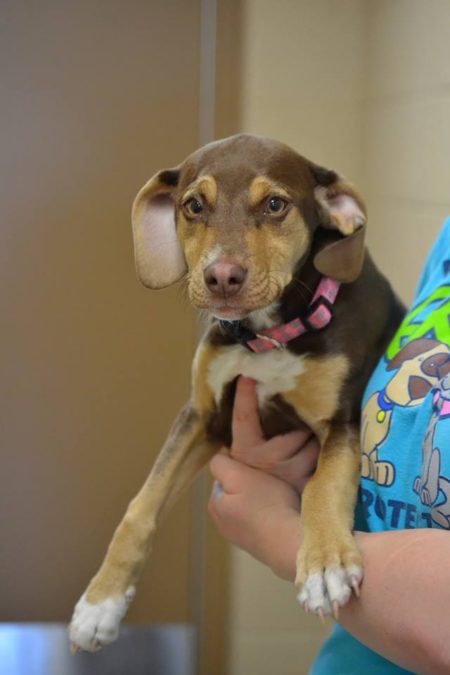 The dog, recently re-named Peanut, was in her human’s home when she surprisingly went ballistic. A Facebook post/letter above mentioned that Peanut sensed something outside that just wasn’t right. “He let her outside where she went barreling into the field behind our house at full speed,” the letter wrote. “My husband followed her and to his surprise, he found a naked, shivering, 3 year old girl curled up in a ball. He scooped her up, wrapped her in his sweatshirt, and brought her inside.” Her humans were dumbfounded at the discovery and immediately called 911 for help.

When emergency crews arrived, the only thing that the little girl would say was “doggie”. That immediately warmed my heart and made me feel better, knowing she knew who her hero was. FOX’s TV 6 spoke to Deputy Steve Kositzky, one of the officers who responded to the scene, and he told them that “There was one other child that was located in the home and that child was removed as well and to my knowledge both those children are together in a foster care type home.” The family finished their letter by saying that if it weren’t for the wonderful people at the Delta Animal Shelter, two lives could’ve easily been lost. Way to go Peanut!