Happy Tails: Meet Some Of The PawsXPacific Dogs & Cats You Helped Us Fly To Forever Homes

On Oct. 29, 2020, you helped us make history by supporting PawsXPacific, the rescue flight that transported 600 Hawaiian cats and dogs across the ocean on a chartered C-130 cargo plane. Many animals on board had languished for months in overcrowded island shelters, but your generous donations helped us fly them to safety in Seattle, where they were distributed to shelters around the Pacific Northwest.

Read on for heartwarming stories from some of the four-legged passengers traveling on board PawsXPacific, many of whom were adopted within days of landing in Seattle. But these ‘happy tails’ wouldn’t be possible without the support of Animal Rescue Site readers, whose generous donations gave this historic flight wings. Here are some of 600 shelter pets you provided with forever homes! 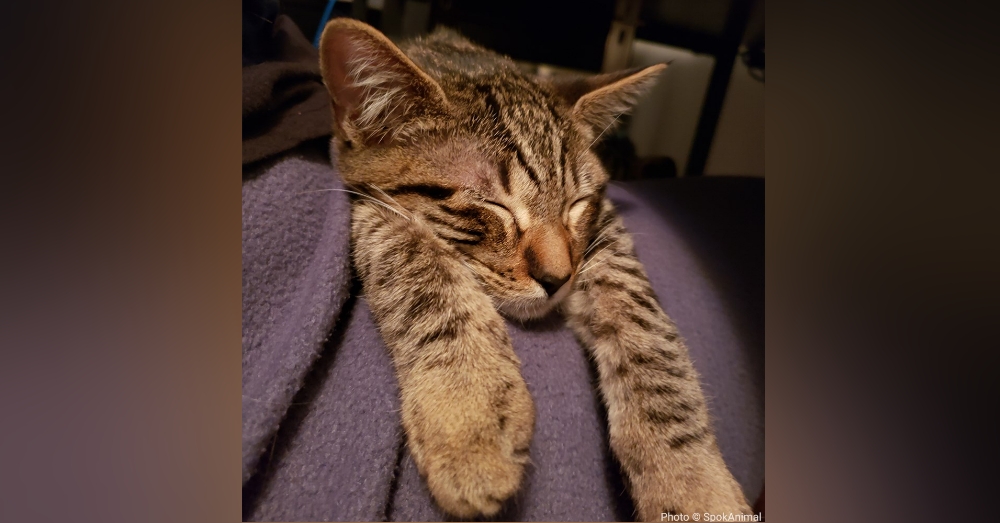 Rescued island cat Luna is now living her best life in Coeur d’Alene, Idaho, where she loves to snuggle and play with her new human, Emily, and cat brother Sonic. Emily rushed to adopt Luna after learning about the PawsXPacific flight on Facebook, and she’s never regretted bringing this sweet gal into her home. “I’m beyond grateful to all the people who helped her get here,” Emily said. “I just love her so much. I want all those people to know she has a permanent home now, and that’s never going to change.” 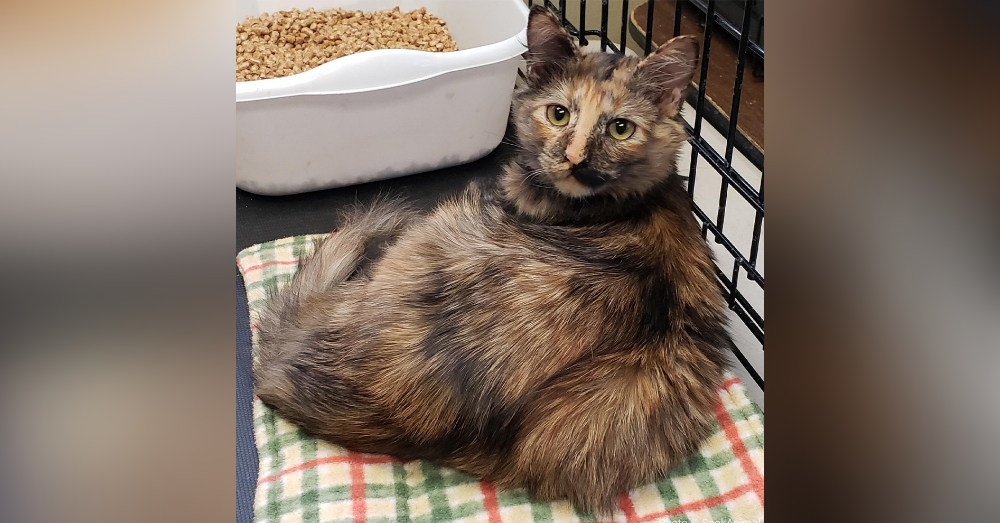 Streisand’s life changed forever on Oct. 29. But when she arrived at SpokAnimal C.A.R.E. in Washington state, staff discovered that Streisand also suffered from ringworm. But rescuers weren’t about to let this sweet girl suffer, especially not after she traveled all this way. “Thanks to funding from Greater Good Charities, I’m getting treatment for it,” Streisand “wrote” on Facebook. “These nice folks here seem to be convinced I’ll find a forever home where they assure me I’ll be considered special for just being me. Thanks for helping me!” 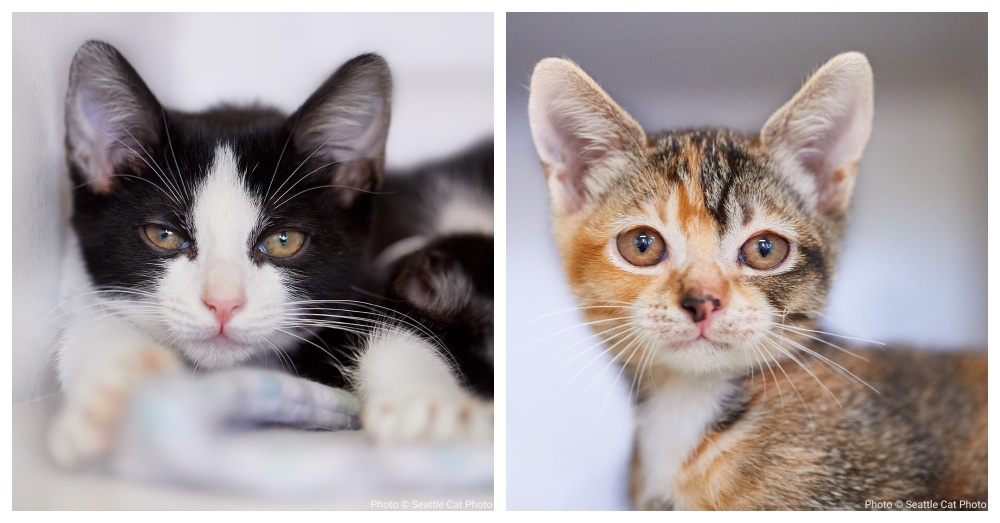 Rescued pets are a hot commodity in Seattle. Just ask Seattle Area Feline Rescue, whose PawXPacific kittens had barely settled in before they found new homes! Two days after landing in Seattle, sisters Gnocchi and Sabrina Spellman were adopted together. Three-month old kittens, Pipsqueak and Sarang, and friendly tuxedo cat, Kira, were also scooped up by families. Even a rambunctious one-eyed kitten named Pip was quickly adopted. “Pip doesn’t let the fact that he’s missing an eye slow him down,” Greater Good Charities wrote on Facebook. “He captured the heart of an adopter in no time!” 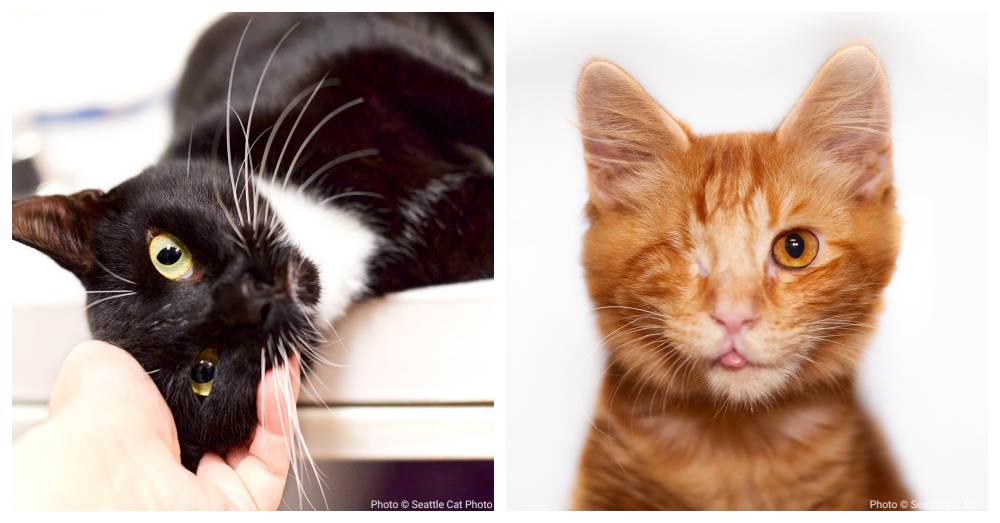 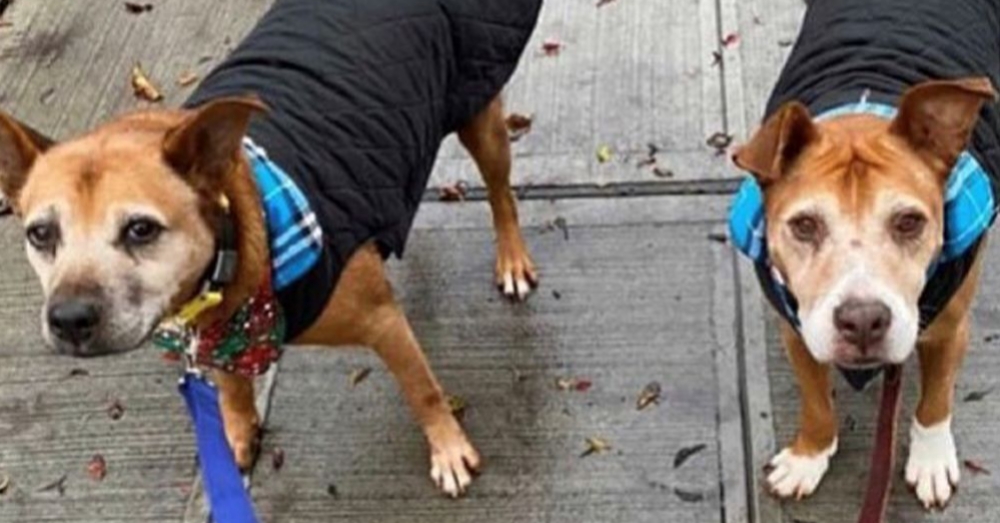 After their owner died, bonded sisters Moki and Phyllis wound up at Kauai Humane Society. “At any other time, it probably would have been a piece of cake to adopt out these two sweet and special girls,” Greater Good Charities explained. But Hawaii’s shelter crisis meant these poor gals would languish in the shelter for 6 months before boarding PawsXPacific. Thankfully, Moki and Phyllis found their fortunes vastly improved upon landing in Seattle. “After the flight, Moki and Phyllis were placed into a loving foster home,” Greater Good Charities explained. “Within weeks their fosters adopted them, unable to imagine life without these two incredible ladies.” 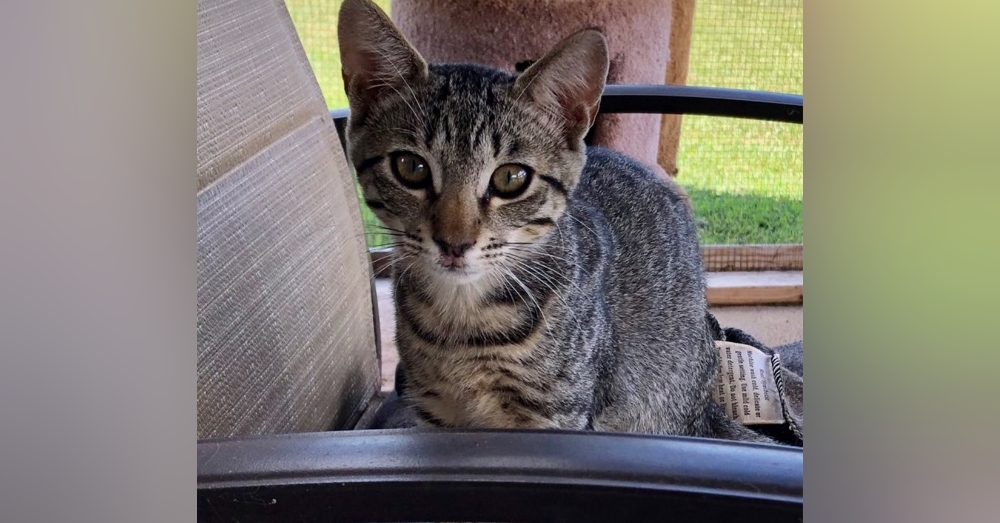 Under normal circumstances, a 6-week-old kitten would be scooped up immediately after landing at Kauai Humane Society. But Alapai arrived at the shelter during the height of a island-wide crisis that left Kauai Humane Society without any space for the kitten or his litter mates. Fortunately, the shelter found room for Alapai and 254 other rescued kitten and cats on PawsXPacific, which flew the kitten to his new life in Seattle, where he was adopted in 10 days. 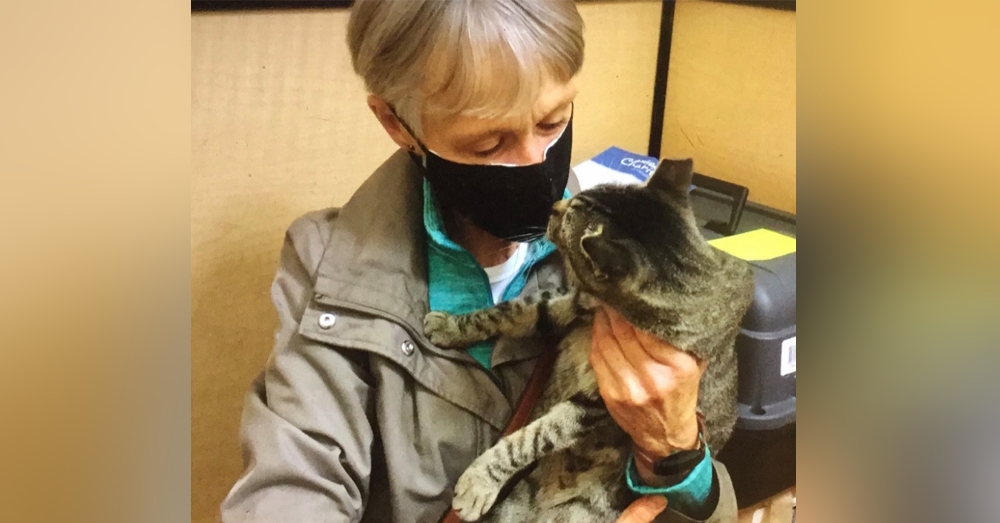 Though they found themselves trapped by the pandemic back in Hawaii, many of our PawsXPacific passengers have already helped their new humans navigate life in lockdown. According to Embrace a Discarded Animal Society, one of our PawsXPacific cats quickly became an emotional therapy pet of sorts to a woman struggling to cope with life in isolation. “This retired lady adopted one of their cats who flew from Hawaii on our #PawsXPacific flight,” Greater Good Charities explained. “Her new furry friend has brought her so much joy as she’s been isolated from her friends and family over the last few months. She and her cat chat all day and have bonded very quickly.” 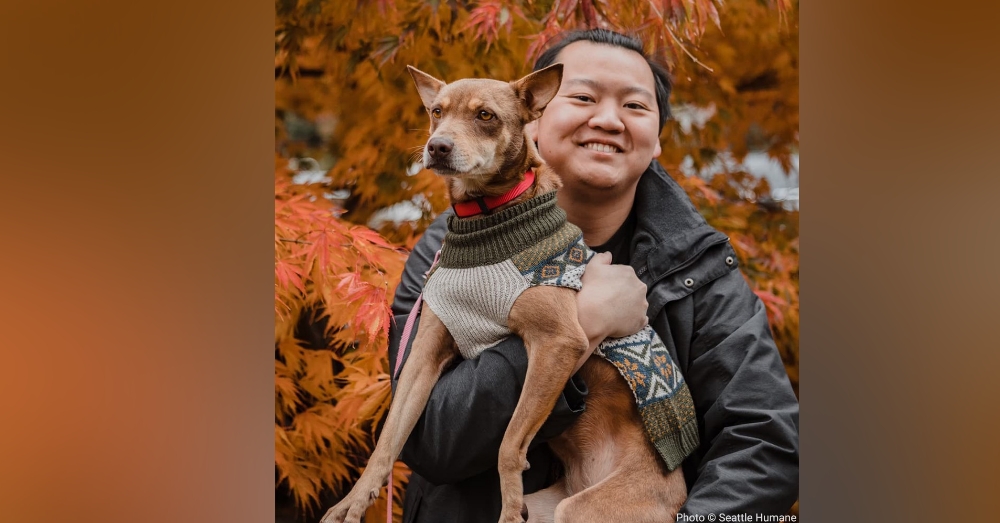 There’s a big temperature shift between balmy Hawaii and the brisk Pacific Northwest, but rescued island dog Chai is adjusting nicely – with the help of a sweater. After spending most of her Hawaiian life outside, the Australian cattle dog was adopted by her new owner, Chris, within days of arriving at Seattle Humane. “Dad reports she loves all the attention she gets from him and his housemates, then curling up on the couch with them for cuddles,” Greater Good Charities explained. But Chai isn’t the only one thrilled by her new family. “She has brought so much enjoyment into my life!” Chris wrote. 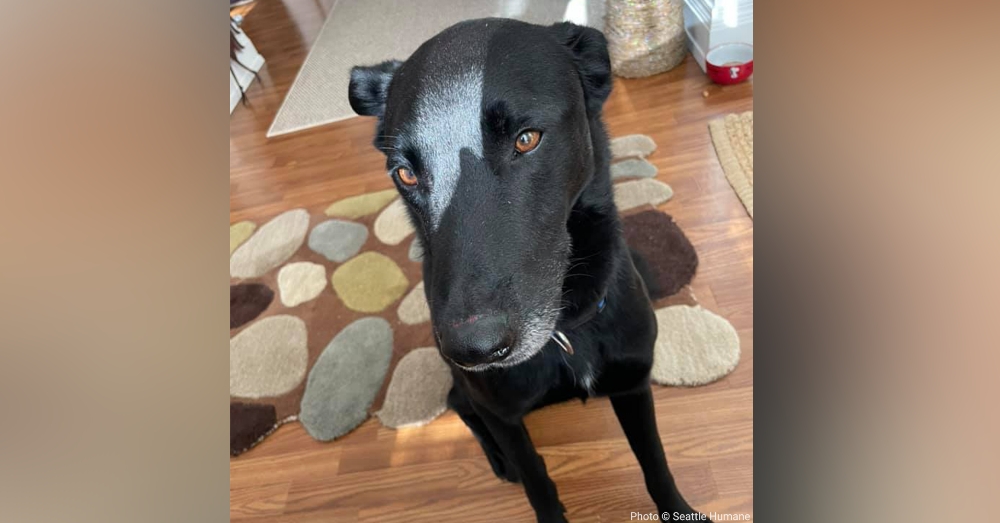 This very good boy hasn’t lived in Seattle for long, but the rescued dog has already impressed his new owner Chris, with his obedience and manners. “Things are amazing with Bibi!” said Chris, who adopted the Hawaiian pup from Seattle Humane. “We worked on “sit” and he picked that up in about ten minutes,” said Chris, whose new pet loves going for walks around his new neighborhood. “Here is a picture of him waiting patiently to go on his walk,” Chris said. “Adopting Bibi was one of the best things I have ever done. I am so glad he came into my life!” 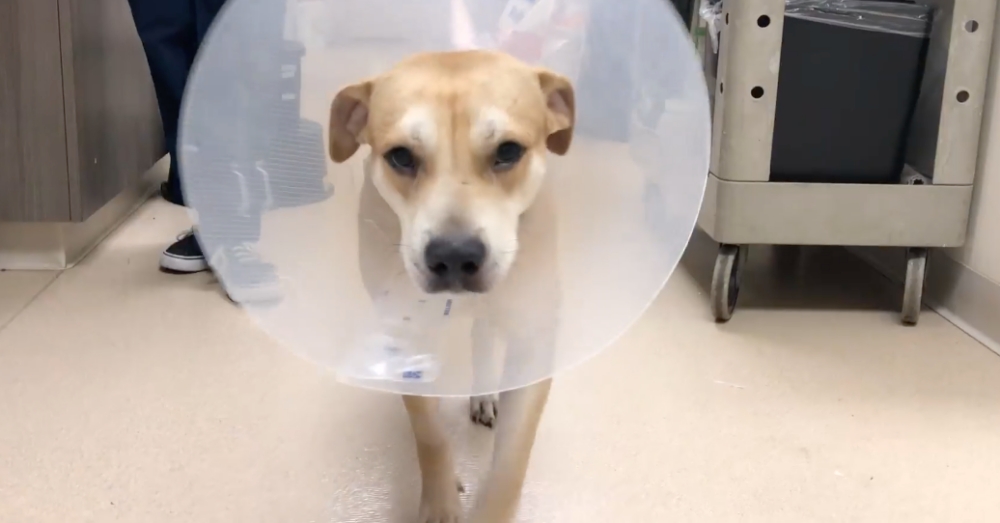 PawsXPacific flew 600 cat and dogs to new homes in Seattle, but the flight also helped animals who stayed behind in Hawaii by clearing the shelters, giving rescuers the bandwidth to focus on rescues need of special care. One of those animals was Ernesto, an island pup found unable to walk on the side of the road. X-rays showed the dog had a broken femur, which could justify amputation, but the chief veterinarian at Hawaii Humane Society – which had just sent 97 cats and 6 dogs to Seattle on PawsXPacific – finally had the time to repair it. “It was decided that although this procedure was costlier and the healing time significantly longer, it would be the best decision for Ernesto,” Greater Good Charities explained on Facebook. “We have no doubt he’ll be able to run, swim, play and be a dog in the very near future!” 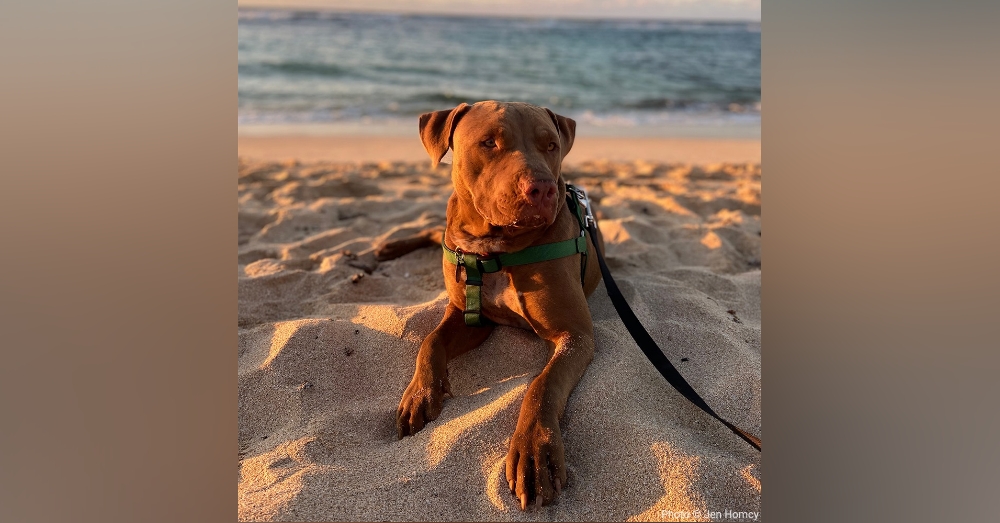 Moose also benefited from PawsXPacific, even though this rescued dog never actually boarded the flight. When Moose first turned up at Hawaii Humane Society (HHS), the rescued pup was terrified of people and also suffered from serious skin allergies. But after PawXPacific cleared the local shelters, Moose was able to move in with PAWS of Hawaii, a foster-based rescue focused on behavior modification. “After just a few days in his new environment, Moose’s behavior began to shift in a positive direction, and he hasn’t looked back,” Greater Good Charities wrote. “He’s a new dog and is now in his forever home, loving daily walks on the beach.”