Man Helps His Paralyzed Husky By Giving Him Pool Therapy

There is a reason why we call dogs man’s best friend. Of course, women are also included in the equation, but in either case, dogs are there for us through thick and thin and they show a degree of unconditional love that we could never hope to return. It really doesn’t matter what is taking place in our personal lives, they are going to be a part of it and they will love every moment of it!

One of the dogs that has proven to be a very loyal companion is Kane the husky. He was a friend to his human for many years but unfortunately, he had a problem with his legs. Many dogs experience this type of paralysis and the family didn’t know what to do. Kane was too old for surgery and medication wasn’t helping. They decided that taking the strain off his legs would be the best choice, so they enlisted the help of the swimming pool.

When they took the dog into the swimming pool, it allowed his muscles to relax. As it turns out, it was exactly what Kane needed and it gave him a lot of necessary relief. 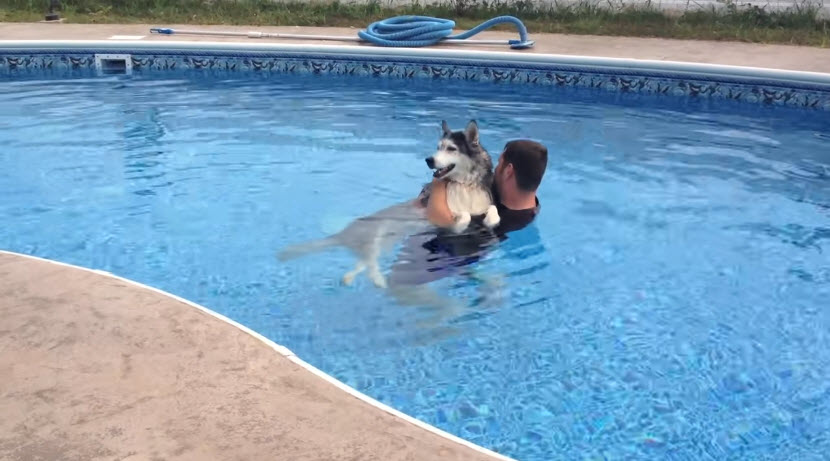 “Two days ago his back legs stopped working. He’s very old, too old for surgery and he hurts. Unfortunately, pain medication only helps so much. We’ve found that taking him for a swim is the only thing that really helps,” his owner said in the video.

It wasn’t long before the pain began to subside and that is when we saw something that nobody could’ve expected. The dog started walking again! He may have been a little shaky when he first started out, but it was a step in the right direction.

As it turns out, not having his weight putting pressure on his hips helped to reduce his pain and allow him to get on his paws again. They helped him at first, but then Kane took over and started doing it on his own.

Although it’s not guaranteed to help every dog, we are so thankful that this loyal pooch got the help he needed.