Augusto Deoliveira is practically a dog whisperer. Born and raised on a farm in Brazil, Augusto grew up around animals, more specifically, dogs! It was there that he learned his hidden talent of group dog training. He connects so much with his dogs that he’s easily able to communicate with them and his dogs treat him as their leader.

At age 23, Augusto is now living in the Massachusetts town, Hyannis. Here, he dedicates his life to his pups… and to shocking people on the streets! Augusto has taken to showing off his dog training talents by walking through the streets of his town with his pack of German Shepherds off-leash! As he and his pack of pups walk through the streets of Hyannis, he is in complete control. The dogs do not deviate from Augusto’s course, no matter what. And with such success on the quiet streets of his town, Augusto decides to give his pups the ultimate test by replicating their off-leash walk through the busy streets of Boston. 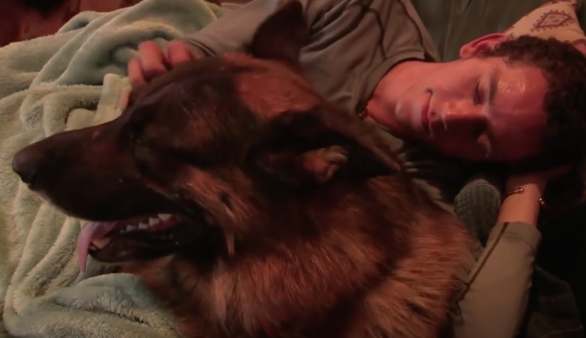 Despite all the distractions that Boston has to offer, Augusto’s six German Shepherds easily pass the test. At the beginning of their walk all the pups are leashed. As they go, Augusto begins to unleash them one by on until he and his pack of pups are walking undeterred through the crowded city streets. It’s an amazing sight to witness and the people on the streets seem to agree!
Share on Facebook
Share on Facebook