4 Orcas Were Trapped By Ice Blocks In Shallow Water. Luckily, Rescuers Worked Together To Clear The Way!

Four wild orcas, including a calf, were trapped by ice blocks in shallow water in the Sea of Okhotsk in Far East Russia. EMERCON rescuers rushed to help them and didn’t even hesitate to jump into the freezing waters. The numerous rescuers pushed the large ice blocks out of the way to free a path for the trapped orcas.

The orcas were extremely afraid and made crying sounds while the rescuers were clearing the way. Fortunately, they were able to successfully free three of the orcas, including the calf, after quite some time, who made their way back to the open sea. Before the fourth orca could swim free, he had to wait until high tide to clear the shallow water. Of course the rescuers stayed with him until that was possible. 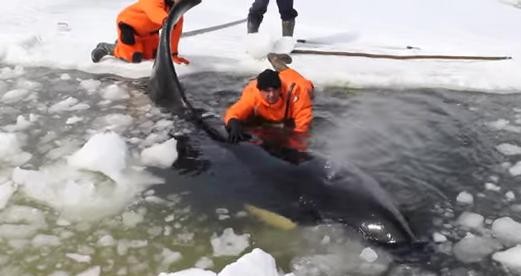