All dogs deserve to have a loving family that will care for them. Sadly, that isn’t always how life turns out for some animals who end up living very sad lives on the street.

Thankfully, luck turned around for a very adorable little pooch after she was found living in a gas station bathroom. The little dog, called Hodu, was frightened. But a kind stranger looked past that to get the little dog some help for the eye injury she had.

When Hodu was taken to the vet for medical care, the vet realized that the eye injury was so severe, Hodu would have to lose the eye. However, the vet didn’t want to rush the surgery right away as she was still a little pup at the time. Instead, she was treated and the surgery was put on hold until she was fully grown.

But in the meantime, word had gotten out about the dog’s story. This was when the little Hodu caught the attention of her owner. The woman immediately fell in love with the dog and adopted her.

Hodu’s owner brought the little pup home with her and introduced her to the rest of the family. Hodu instantaneously made friends with everyone and showed that she had plenty of love to spread around.

Hodu is a happy little pup who enjoys daily adventures at the nearby dog park. Despite all she’s been through, she definitely knows how to make each day count.

Watch the adorable video below:

What do you think of Hodu’s story? Let us know!

Scientists Finally Solve Mystery Behind How Butterflies Fly: Click “Next” below! 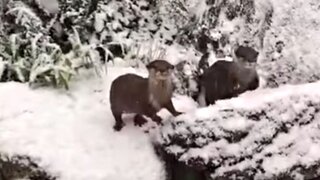