Adelinde Cornelissen is an Olympic athlete with quite an amazing story. As a decorated dressage rider, Cornelissen and her horse, Parizal won multiple medals during the 2012 London Olympics. As you can imagine, the duo have an extremely strong bond and Cornelissen always makes sure her beloved horse has the highest quality of care. The two prepared to travel to Rio for the 2016 Summer Olympics and were favored to win. However, the Netherlands athlete’s trip would quickly turn into a nightmare. She chronicled the entire ordeal on her Facebook page.

Once arriving in Rio, Parizal was bitten by a poisonous insect. The bite was very severe and quickly began to swell. The swelling was accompanied by an extremely high fever and Cornelissen knew her partner needed medical attention. Fortunately, the horse was able to get the urgent care he needed. A local veterinarian was able to get Parvizal’s fever under control and reduce the bite’s swelling. Of course, Cornelissen refused to leave her horse’s side. 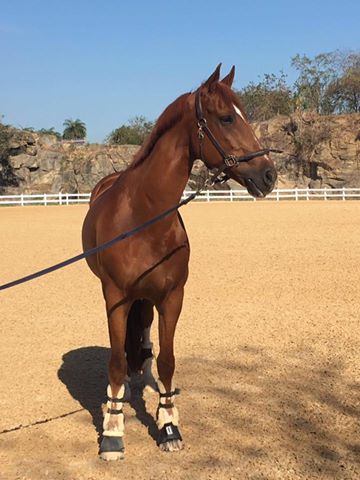 “I slept at the stables, checking up on Parzi every hour,” Cornelissen wrote on her official Facebook page. “I was not going to leave him alone!”

After a scary night, it appeared that the horse was feeling much better by the next day. Parizal was cleared to compete and Cornelissen knew she couldn’t let the rest of the dressage riding team down. The two got ready for competition and rode into the arena. However, Cornelissen knew something wasn’t right.

“When I entered, I already felt he was giving his utmost,” she wrote, according to The Dodo. “Being the fighter he is, he never gives up.”

That’s when Cornelissen made a decision that shocked everyone.

“In order to protect him, I gave up,” Cornelissen wrote on Facebook. “My buddy, my friend, the horse that has given everything for me his whole life does not deserve this … So I saluted and left the arena.”

Cornelissen did what any loving pet owner would do. She didn’t want to risk her best friend’s life. Her decision may of left her without a medal, but she is leaving Rio with her healthy and happy best friend.