Officers Save Senior Golden Retriever From Drowning In An Icy Pond

Back in 2012, an older dog found itself in a very harrowing position. The elderly Golden Retriever was trapped in an icy pond and did not know how to get themselves out. Luckily, a member of the Royal Canadian Mounted Police was on hand and he was ready to rescue the dog from the life-threatening situation.

Larry LaVallee caught a glimpse of what was going on through his bedroom window and he knew that he had to act quickly. His bedroom in Kippens, Western Newfoundland in Canada overlooks the pond where the dog was struggling to remain afloat. At first, he assumed that a box had blown out onto the ice. However, it wasn’t long before he realized that the situation was far more dire than that.

Once the “object” started moving, things became very clear. Larry needed to save the dog. He contacted the RCMP immediately. By the time they got to the animal, the poor dog looked like it was near death. It’s sad to think of what might have happened if Larry was not looking out of his window at the right moment. 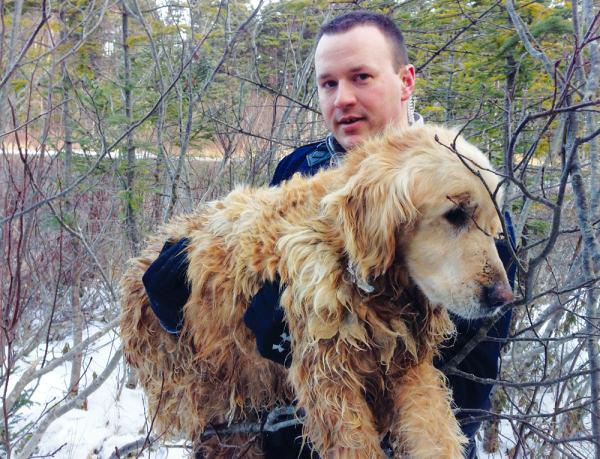 Constable Kris LeGresley worked to remove the dog from the pond, finding a pathway through the brush. Constable Kelsey Ford assisted when it came time to carry the tired dog back to their vehicle.

The owners of the animal were obviously very relieved. They had gone out looking for the dog already, but to no avail. The family was reunited on the same day of the rescue and not a moment too soon.

“These are heroes of the community. Despite doing a very long shift they were very respectful and worked really well together saving that dog’s life,” Larry shared to the Western Star, according to Dog Heirs. We couldn’t have said it better ourselves.