Little Lamb Chop Wants To Play With The Dog So Baaaadly

This baby lamb was rejected by his mother so the family brought him inside for bottle feedings.

Lamb Chop is a noisy little thing! I thought it was someone doing work inside the house or the floor about to give way. LOL! 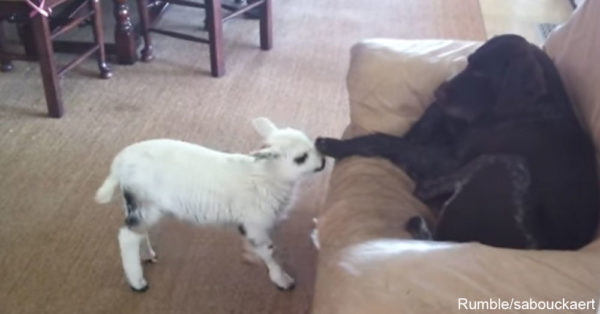 Nope, it’s just Lamb Chop chatting away…probably saying: “Get your butt off the couch and play with me, Dog. NOW!”

According to the video, after one of their sheep was rejected as a baby by its mother, this family decided to take it in for bottle feedings. A few weeks was all it took for her to start acting like one of the dogs!

What a little cutie! Noisy but cute!

Julie Hunt Julie resides in Northern New Jersey with her two kids, two dogs, cat and partner. She has two published books which make excellent trivets if you aren't a fan of poetry. She tolerates people but LOVES animals. If she isn't blogging, she's most likely cuddling with her pups, Paisley and Skyler.
Whizzco for FAP
$75M