Ever since the original Grumpy Cat passed away in 2019, social media has been racing to find a suitably disgruntled successor.

There was Louis, a glaring Persian from Austin, and Meow Meow, an adorably angry fluff ball who lives in Taiwan. A scowling stray named Saul also won the Internet’s heart after surviving life on the streets, being hit by a car, spooking hospital staff, and then frowning his way into a forever home.

But none of these cats hold a candle to Kitzia, a glowering Florida feline who makes these other cats look almost cheerful. No matter what she does, the aptly-nicknamed “Angry Kitzia” or “Grumpy Kitzia” always appears to blazing with rage, even when she’s drinking milk, cuddling with her human, and doing other things cats generally enjoy.

According to the cat’s owner, Viktoriia Otdielnova, Kitzia also loves resting on freshly washed and folded tea towels, sort of like a little hen. Alas, this cat is so grumpy that even her favorite pastime looks like a chore.

It’s unclear if Kitzia has a genetic disorder that pulls her face into a permanent scowl, but Bored Panda reports that this disagreeable-looking girl is actually very sweet in real life.

If you haven’t met Kitzia yet, you can get virtually acquainted with Grumpy Cat’s potential successor here. 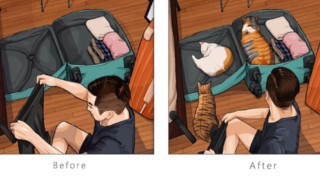 Artist Illustrates What Life Is Like Before And After Getting Pets 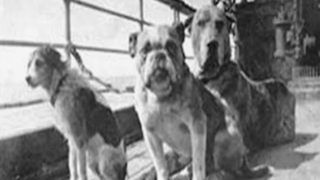 Taking A Look Back At The Dogs From The Titanic 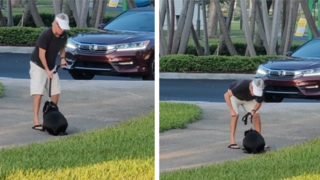