When an animal shelter worker in West Virginia discovered a tiny kitten in the facility’s mail box on a hot summer day, she knew she had to act fast.

Running the 6-ounce 3-week-old kitten inside, out of the heat, she found that one of his eyes was infected and stuck shut. The staff member contacted Operation Fancy Free in Evans, WV, in hopes that they could restore the animal’s eyesight and nurse him back to health.

“Nestle,” as he was named, was sent to Operation Fancy Free on June 12. 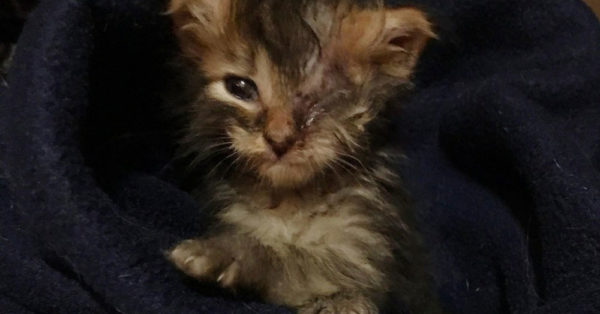 Null helped give Nestle the medical attention and nourishment he needed, and, while the infection threatened to take his eye, Null was willing to fight it back.

A few days later, Nestle was gaining weight, moving around a little more, and responding to Null’s voice.

“He is making milestones—pottying on his own, learning to play with toys, paw wrestling,” Kat said. “Nestle is strong at heart.”

Since his rescue, Nestle has gained the strength to eat and poop without assistance or discomfort, and his eye is on the mend as well. All it took was two weeks with Null and Nestle had command of his full vision.

“He’s a champion fighter, and that will help him survive this,” Null said.

Perhaps the tiny tabby will grow up unaware of his auspicious beginnings, but Nestle’s story will certainly live on. Share if you agree, and click the button below to find a fun way to hear a calming cat’s purr, anywhere you can get online.