2020 just won’t stop sending the world all sorts of nightmarish situations. At the present moment, the southeast region of Mexico is experiencing massive flooding. As a result, there have been rescue efforts made to help those affected by the floods, including one very lucky yellow labrador who was saved from potential drowning.

The pup was fortunately discovered in time by a group of people going by on a boat. He was holding on for dear life to one of the buildings in his neighborhood when he was spotted by the boat.

A Facebook video posted by Secretaría de Marina, the Mexican Navy, showed the rescue, in which the yellow Lab was terrified. The poor dog was shivering in the water as he desperately fought to keep his head above water by clinging to the nearby railing.

The people in the boat knew that they couldn’t leave him there. They went over in the little boat and helped to pull the dog into it. The video caption explained that they were able to get the lucky pooch to safety.

Furthering the dog’s rescue, there was an update showing the dog to be safe and dry. Not only was the dog safely rescued, but he was welcomed as a new team member of the Mexican Navy. 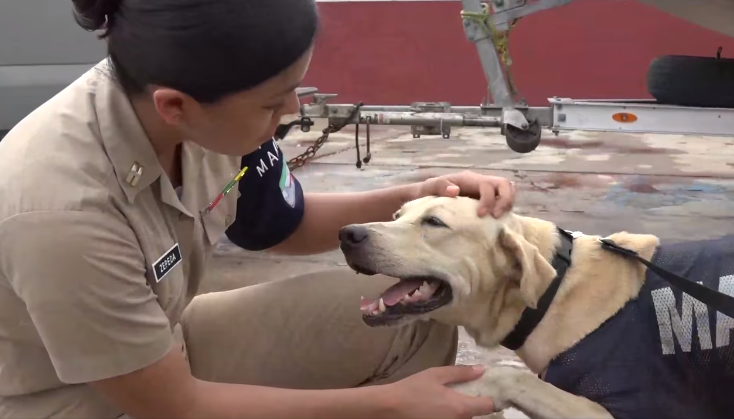 The Mexican Navy has been hard at work in Tabasco and Chiapas, the regions in the southeast, where the floods have been particularly bad. The flooding is a result of two cold fronts mixing with Tropical Storm Eta – creating extreme floodwaters that have damaged around 35,000 homes in the Tabasco region.

All last week, Mexico saw heavy rains fall across Tabasco, Chiapas, and Veracruz. These rains have also caused rivers to overflow and bring about landslides. As a result, the death toll has been estimated to be in the dozens.

Fortunately for this little pup, he was not one of the victims. Thank you to the Mexican Navy for all you’re doing in the face of the floods.