Much of California has been destroyed and is still smoldering after October wildfires ripped through the state. Stories of tragic death and destruction are in no shortage, and even those brave enough to attempt rescuing their loved ones are in grave danger.

In Santa Rosa, where there were once rows of suburban homes in the Coffey Park neighborhood, there is now only rubble, ash, and the charred skeletons of cars and bikes left behind.

“You don’t even see a resemblance of what it used to be,” wildfire survivor Natasha Wallace told Fox40. 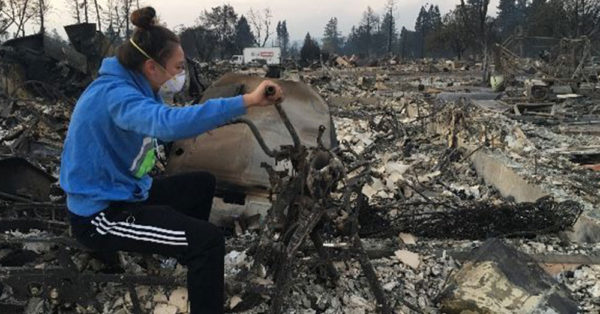 Source: GoFundMe
Natasha Wallace in her neighborhood after it was destroyed by wildfires.

Wallace was up late on October 9, studying for her coursework at Santa Rosa Junior College. While heading home, though it would normally be dark at 2 a.m., she saw the glowing horizon. The wildfire was spreading and rapidly approaching her house.

Her first priority: to save her dog, Bentley. Racing home, she grabbed the 4-year-old pit bull and headed back out to her car. 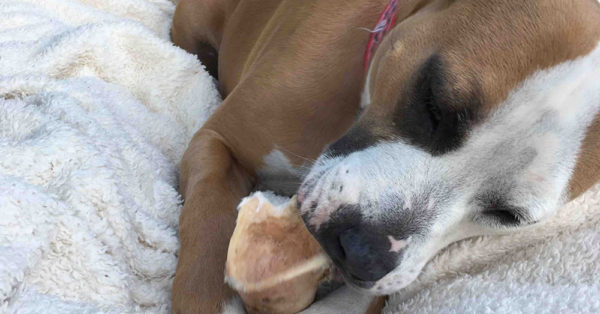 “I would never part ways with my dog. Ever,” Wallace said. “That’s my ride or die. Oh my God, literally.”

Making a quick getaway wasn’t easy, however. Thousands of other Californians were in the same boat, and on the same freeway.

“It was coming faster than I could leave in traffic, so I went back and got my bike,” she said. 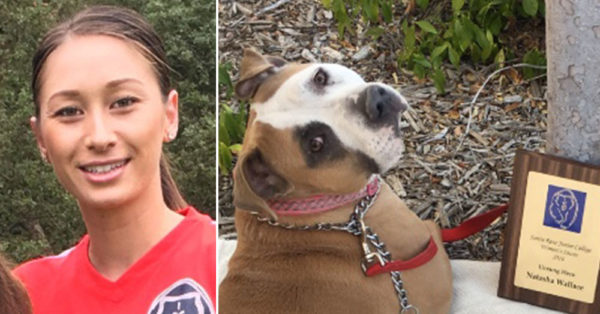 Weighing a sturdy 70 pounds, Bentley isn’t exactly a lap dog, nor is he able to ride a bike. Wallace kept her canine fastened to her back in a duffel bag.

“I grabbed my dog, and I told him, ‘Hey man, this is serious, you need to just sit in the bag.’ And he hopped right in,” she said.

Wallace, carrying Bentley, biked a few miles ahead of the fire before someone stopped to offer help. A man named Paul Johnson drove the pair the rest of the way out of danger. 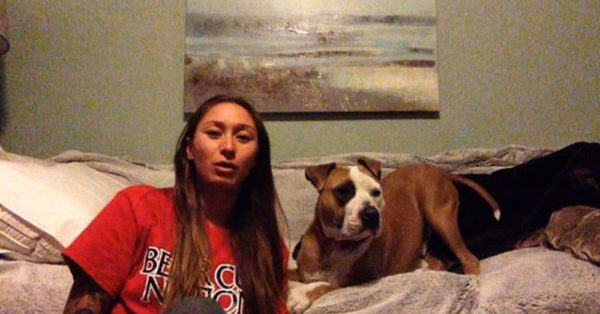 After the fires died down, Wallace returned to her former home. There’s no doubt she and Bentley made it out just in time.

Wallace and Bentley are safe, but there are still many more in great peril. California officials have ordered an entire city to evacuate due to worsening conditions that have killed 40 people in the largest fire in state history. We need your help! Click the button below to make a difference!

Fires have been burning in California’s Sonoma, Napa, and Mendocino counties for over a week, as firefighters work tirelessly to contain the blaze. 17 wildfires have consumed well over 220,000 acres, left over 20,000 people under mandatory evacuation, claimed the lives of at least 40 people, and consumed at least 3,000 homes and businesses in a matter of days.
With firefighters still struggling to contain the fires, people, pets, farm animals and wildlife all remain at risk. GreaterGood.org is providing support to partners who are providing response, shelter and relief to those affected.
The recovery for many will be a long road, and the time to support them is now. Cash donations are needed to continue operating shelter and rescue work. Please Help!
Make a difference