Napping Man Wakes To Find Himself Cuddled By Stray Kitten

Cats nap for up to 16 hours a day, which could be why one sleepy stray felt so comfortable cozying up with a likeminded stranger napping outside.

When Ali Safa awoke from his leisurely outdoor siesta, he was surprised to find a dirty white kitten curled up on his stomach. “I was taking a nap on the balcony of our house, and, like two hours later, I woke up and I found her just napping on my stomach,” the Canberra, Australia, resident explained to The Dodo. “At first, I thought she was a rat.”

I was taking a nap outside and i just woke up to a stray cat sleeping on my stomach, it’s still sleeping from aww

Safa carefully snapped a picture with the dirty-but-happily-dozing creature, which he posted to Reddit. “While she was sleeping, I kept hearing that ‘purr’ sound cats make,” he recalled, describing the kitten’s restful murmur as one of the cutest sounds he’d ever heard.

When the baby cat finally awoke, she communicated to her new friend that she was ready for a second breakfast. Safa didn’t have any cat food in the house, so he shared his mother’s leftover chicken wings, which the skinny feline eagerly scarfed down.

Ali assumed the kitten probably belonged to the neighborhood’s large colony of stray cats, but – after giving the kitten a much-needed bath — took his new four-legged friend to the vet to make sure. When doctors couldn’t find a microchip, Safa toyed with the idea of adopting Angel himself. 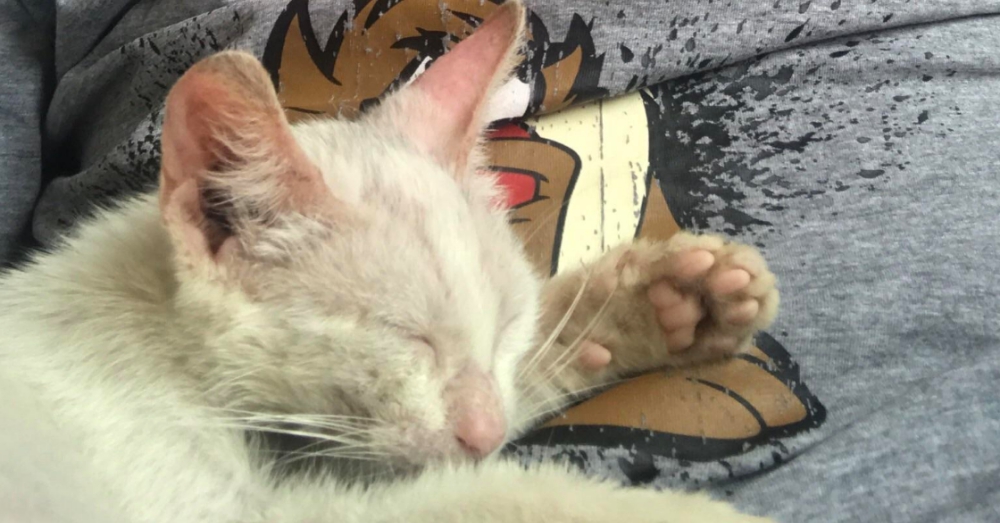 “There really aren’t any house rules against pets in my family and she looked like she can use some family, so I was like, ‘Screw it, I’m keeping her,’” Safa told the Dodo. He would later stock up on actual cat food and toys to help his scrappy new pet feel right at home.

Today, Ali and Angel – who has since received a clean bill of veterinary health — are still thick as thieves, and not only around nap time. “All I can say is that she is the most fun cat I have ever gotten to play with,” Safa told The Dodo. “All she does is just roam around me all the day wanting pets or to play.”