Woman Punches Mountain Lion In An Attempt To Save Her Dog

A California woman in Simi Valley proved that some of us would do anything for our dogs after she punched a mountain lion who’d attacked her dog in the backyard.

According to the Simi Valley Police Department, the woman was letting her 10-year-old miniature Schnauzer named Pumbaa out to the yard to relieve himself early in the morning when a mountain lion attacked the dog.

In response, she pounced on the mountain lion and punched it in an attempt to save Pumbaa from its jaws. Unfortunately, Pumbaa did not survive.

“She obviously cared about her dog very much, as all dog owners do,” Sgt. Keith Eisenhour told NBC4. “She tried to fend the animal off by punching it, elbowing it and tried to pry its jaws open.”

When the mountain lion became aggressive toward the woman, she was forced to retreat back inside her home.

When Simi Valley Police Department officers arrived at the scene, they found the mountain lion — who was wearing a tracking collar, a device are used by the National Park Service in order to study mountain lions in Southern California —in the back yard eating the dog.

A California Fish and Wildlife warden was called out with the intention of using a bean-bag shotgun to scare off the mountain lion, however, the mountain lion fled from the property prior to any bean-bag rounds needing to be fired.

Officers at the scene searched the surrounding area, however, they were unable to further location the mountain lion.

Pumbaa’s owner reportedly suffered a minor cut on her finger as a result of the attack.

“She got a cut on her finger, and she kept trying to stop the mountain lion from killing the dog for all she could,” the woman’s brother told ABC7. “She said she was punching it and kneeing it in the head and trying to pry its jaws open, and it just wouldn’t let go. The whole time she could hear her baby dying.”

The deadly incident occurred just hours after Simi Valley officers responded to a report of another mountain lion attack on a different pet in the same neighborhood. According to police, the wild animal attacked a dog walking with its owner around 9:53 pm in the evening.

The dog, identified by NBC4 as an 8-year-old Havanese named Sammy, was injured by the mountain lion but was able to be rushed to the vets for medical attention. 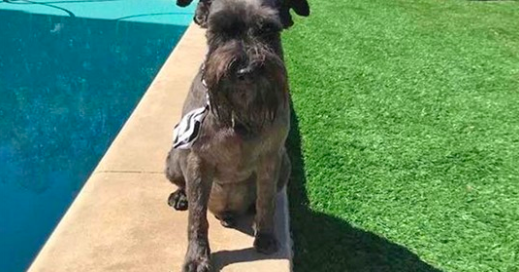 A California Department of Fish and Wildlife game warden was also called to the scene for that incident. And according to police, even then, authorities were unable to find the mountain lion after conducting a search of the area.

The Simi Valley Police Department has received additional reports of mountain lion sightings in the northeast region of the city following Pumbaa’s attack, so they were advising residents to remain vigilant while outside, and keep pets leashed at all times.

Authorities also cautioned residents to never approach a wild mountain lion, and only fight back should the mountain lion attack.

Simi Valley Police said in a statement, “Do not turn your back. Face the animal, make noise and try to look bigger by waving your arms, or opening your jacket if wearing one; throw rocks or other objects. Pick up small children. Research on mountain lion attacks suggests that many potential victims have fought back successfully with rocks, sticks, garden tools, even an ink pen or bare hands. Try to stay on your feet. If knocked down, try to protect the head and neck.”