The ban on pit bull dogs in Montreal has been suspended, but Mayor Denis Coderre is redoubling his efforts to push the divisive act through.

“We will not yield to threats nor interest groups. We reconfirm our intention to ban pit bull type dogs from Montréal,” Corderre wrote on Oct. 6.

The mayor praised the city, the largest in Quebec, for setting high standards in respecting animals’ lives and well-being. However, citing “serious attacks against people by dogs, especially pit bulls and the sense of impunity that seems to prevail among many owners of dangerous dogs,” Corderre defended the ban. 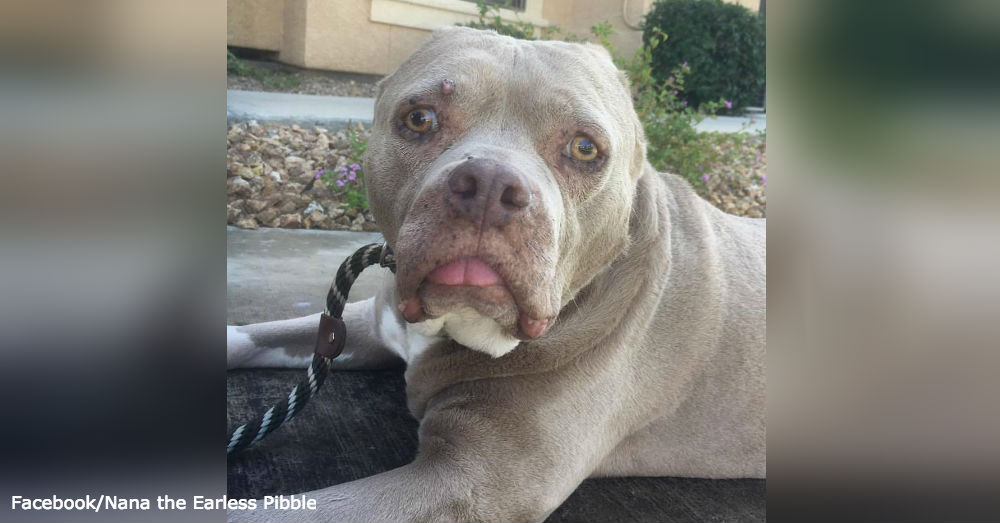 Nana the Earless Pibble has taken to Facebook in support of Montreal pit bulls.

“My top priority will always be people and their safety. That is why we adopted a by-law concerning dangerous dogs and one in particular, the pit bull,” he wrote. “Pit bulls have been banned in numerous cities throughout Quebec, Ontario and around the world.”

The ban was met with worldwide protest when it went into effect on Monday, Oct. 3. Animal rights groups condemned Corderre’s actions, enough to prompt the Montreal SPCA to withdraw animal shelter service contracts with the city. Under the law, sheltered pit bulls would be euthanized and, if not permitted and muzzled in public, pet pit bulls could be taken from their families and euthanized as well.

I am reposting this from fellow animal lover and pitty angel @sophiegamand . I have spoken out against BSL for years now and stories like this really break my heart. I urge you guys to take a look. It’s important to know what’s going on so we don’t make this mistake over and over again. “This is from a lady in Montreal (Erika Ashley Matta on Facebook, re-published with her authorization, caption edited).” . “Today is the day that we start training Lucky to accept wearing a muzzle. This picture breaks my heart in so many ways… We tried to make it positive but to her it is not and she cowards down. I cannot believe it has gotten this far. I truly believe that targeting these dogs is not right and we should target the owners.Because of this new law any pit bull or mix will have to be muzzled (be at the end of a short leash) and live life like a prisoner. No more playing ball in a park or running around catching sticks. I am the owner of what we believe is a pit bull mixed with lab. I adopted her back in 2007 when she was just a year old from the SPCA. She has been through so much and now at her senior age she sure doesn’t deserve to be muzzled”. . “This is the face of unjust, outdated, fear-mongering BSL. This is what Montreal signed up for on Tuesday. Fortunately, the @spcamontreal is challenging it by suing the City. So stay tuned for more! . #endBSL #BanMontreal #seniordog #PitBullFlowerPower Photo: Erika Ashley Matta, used with permission.”

“There is a huge problem with enforcement of breed-specific legislation because scientific studies have shown that it is impossible to identify breeds by simply looking at dogs, especially with mixed breeds, which are the vast majority of dogs people own,” SPCA lawyer Sophie Gaillard told the Montreal Gazette. “Even veterinarians and dog behaviour specialists can’t identify breeds that way, so to expect police officers and municipal inspectors to accomplish that task is just unrealistic.”

The CBC reported that a Quebec Superior Court judge suspended the ban on Wednesday, Oct. 5, pending a challenge by the SPCA. Adding to its hurdles, Judge Louis Gouin extended the suspension indefinitely, writing in his decision that, apart from being “written in haste,” the ban’s definition of a “pit bull-type dog” is excessively vague, and should be clarified given its ramifications.

“The challenge is to establish the limits of the very elastic definition of ‘pit bull-type dog’ and the court notes that, during the hearings, even the city has been unable to define those limits,”Judge Gouin wrote.

The events in Montreal still have me reeling. The fact that politicians would pass such archaic, ignorant legislation with such a majority boggles my mind. It reminds us that none of us are safe from lawmakers ignoring science and evidence, and singling out breeds. So today’s edition of #SundaysWithSausage addresses things to do if someone you know talks in favor of breed bans. Firstly, we need to stay calm and polite. Pit bull opponents already see us as the imbecile, raging fanatics who do nothing but lie about our dogs (I took this literally from an anti bully web page). It is so hard not to get enraged, but these people will just see it as more proof that we are as crazy as they try to make us out to be. Next, we have to stop blaming/shaming other breeds in order to defend ours. In our attempt to showcase pit bulls as they are, beautiful, warm, wonderful, we often look for flaws in other breeds. Doing that is bad in so many ways. The most obvious one being that we’re doing exactly what we expect other people to stop – using broad and incorrect stereotypes to try to make others look bad so we can look better. It is the very thing we’re fighting. We don’t need to tell everyone that ‘the only dog who ever bit ME was a chihuahua/wiener/ewok/Martian’ or that ‘*insert random breed* is SO much more aggressive than pit bulls’. This is not a competition, nor should we need to portray others in a horrible light so that pit bulls can shine. If we want people to see our dogs for who they truly are, we have to focus on our dogs, and nothing else. Be good to them, train them, ensure they are the best ambassadors they can be. We as owners need to learn the facts, share them as often as we can, and argue calmly. Regarding the facts – Being as knowledgeable as we can is important, so we need to be on top of everything. The @animalfarmfoundation has the best pamphlet of BSL talking points I’ve found to date. It is comprehensive yet concise. Check it out here and share it with everyone you know: https://www.animalfarmfoundation.org/files/BSL-Talking-Points-ebook_2.pdf Let’s hope one day our dogs will be, well, just dogs.

According to the CBC, Montreal lawyer René Cadieux indicated in court that the City of Montreal didn’t see much of a need to define pit bulls outside of instinct and inconsistent metaphor.

Gaillard said the SPCA has asked to meet with Montreal city councillors on several occasions, according to the Montreal Gazette, but those requests have all been met with silence.

“This was an opportunity to really improve dangerous dog bylaws,” Gaillard told the Montreal Gazette, “and to look at what other means really work to reduce the risk of dog bites, and instead the city has gone ahead with this panic policy that will not be effective in terms of improving public safety.”

The SPCA faces a lengthy court battle and untold costs, but the fight for equal treatment of all breeds of dogs will continue in Montreal. To lend your support, follow this link or push the “Next” button to sign a petition urging Montreal Mayor Corderre, the city council, and the Premier of Quebec to forget the ban.