A Cat Went Blind Due To Pet-Shop Neglect, But A Friend Ensures That Her Struggles Are In The Past

Moet, a white Persian cat, started out in a pet shop in a small country in the Middle East called Oman.

She lived in a dirty cage filled with several other cats. Her only chance at great life seemed to depend on whether or not she would be purchased someday.

However, Moet’s health quickly took a turn at the pet shop.

Moet caught a serious case of the cat flu from one of the other cats in the shop. That left customers not wanting to take home a sick cat and walking past Moet everyday. Soon, all of her cagemates had found new homes outside the pet shop, leaving Moet all alone.

Without being given food or water regularly, in addition to a likely lack of medical care, Moet only became more ill. Eventually, she became blind.

That’s when according to the Dodo, she was rescued by a woman who often did sweeps of pet shops in Oman, pulling out animals who were the most at-risk. Emily Shotter is a member of Omani Paws, a rescue community in Oman, told The Dodo. 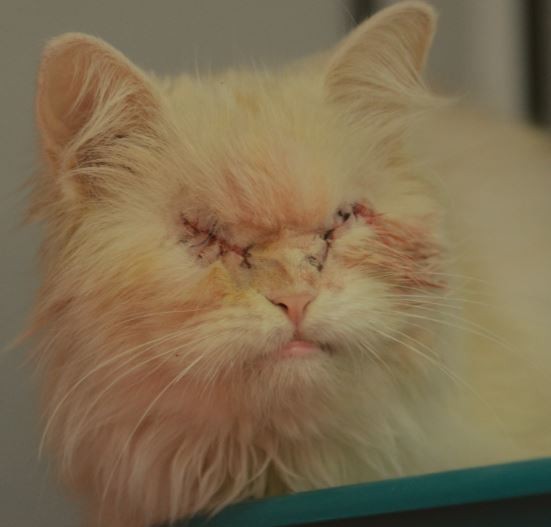 Once rescued, Moet was taken to the Al Qurum Veterinary Clinic, where the then 1-year-old cat underwent surgery to remove her eyes. The clinic informed Shotter that as a result of her illness, they had become a source of infection and needed to be removed….