Dogs are not only man’s best friend but loyal guardians of children. A cocker spaniel named Peanut never left the side of 3-year-old Abigail Ladwig who wandered off into the dense woods by their home.

The toddler was reported missing on August 9 after last being seen at 6:45pm following Peanut around the yard of her home in Winter, Wisconsin.

Her father stepped inside for a few minutes and when he came back Abigail and Peanut were gone.

Sawyer County Sheriff’s Department organized a search and rescue and hundreds of volunteers from the community stepped up to help. Drones, canine units and helicopters were used to search the woods Sunday and Monday and the public was asked to report any signs of Abigail or Peanut. 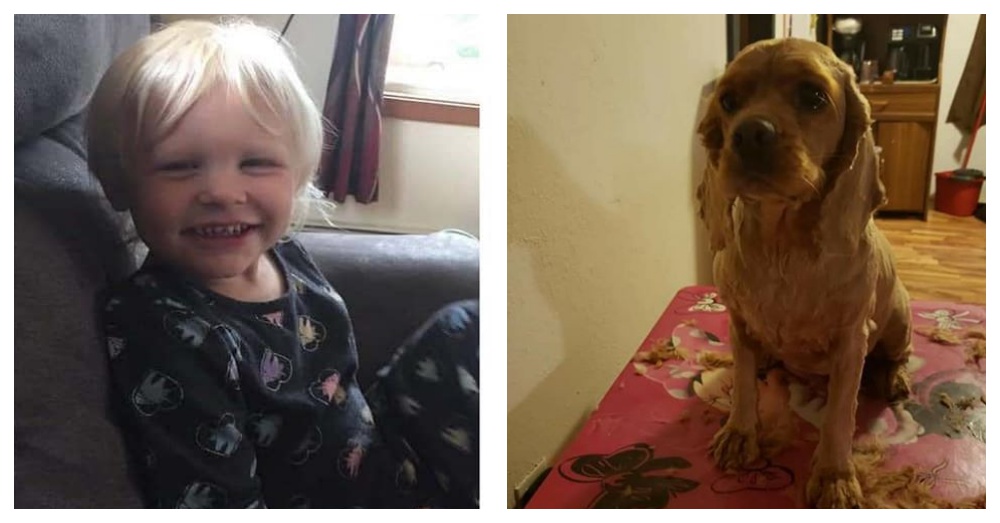 The neighbor across the street, Jerome Frederick, told KBJR that he was unable to help with the search due to a bad knee, but was relaxing on his porch around 7:20pm on August 10. “I was sitting here reading a book and watching the traffic and that little dog had come running out.”

It took a moment for Frederick to recognize Peanut but then was shocked to see Abigail just standing next to him. “She wasn’t crying, she wasn’t upset,” Frederick said. “She said, ‘where’s my mama?’ And that’s all she said to me.”

Abigail has some scratches on her legs, insect bites, and was a little dehydrated but otherwise unharmed. The pair spent the night in the woods and kept each other safe even during a storm.

People were relieved to hear both were safe and back at home and started to praise Frederick for finding her, but he said, “I didn’t do nothing she was just sitting here, she tripped over me.”

Police searched the area behind Frederick’s home, so the only logical explanation is Peanut led them home.

The true hero in the story is Peanut. “Thank God for Peanut. He protected her and led her right back home. Much love,” wrote one person. Another said, “I agree he brought them home! That’s so special the dog stayed by her side. I’d be scared out all night alone let alone a 3 year old.”

Pat Sanchez, coordinator of Sawyer County Search and Rescue, said, “Thank you to all responders, volunteers who came out to search for Abby and the donations of food and water. It’s amazing how in times of need, we all come together for such an amazing outcome.”