I’m grateful that I’ve never had to experience the devastation of a pet running away from home. Unfortunately, there are some people out there who aren’t as lucky. Sometimes pets will come back home and sometimes they won’t. When they don’t return, it’s a very crushing blow.

Rustico Sanson Jr. experienced the disheartening accident of his beloved pup, Coco, running away from home. When Coco got out, he left Rustico frantic to find him. The Philippines-based Rustico searched everywhere for Coco, but he kept coming up empty.

Even as the days turned into weeks, which turned into months, Rustico wouldn’t let go of the hope that one day Coco would be found.

And three months after being lost, Coco and Rustico were able to have their reunion – and it was an emotionally charged one. Rustico was beside himself with relief and happiness to see his beloved pooch.

As he admitted to The Dodo, he was an emotional wreck who couldn’t stop crying. He shared that the little pup wasn’t just an animal, he was a part of his family. That is what drove Rustico to continue looking for Coco every single day.

He would search for hours for Coco, leaving no area unturned. He would ask everyone he’d encounter on his searches if they’d seen Coco. He admitted that he would often get emotional on his long searches.

But thankfully, his persistence eventually led him to find Coco. Three months after the pooch had run away, Rustico received a tip that a stray dog matching Coco’s description had been seen wandering around a parking garage. Rustico immediately set off to the parking garage, hopeful that something good would come of the reported sighting. And fortunately for Rustico, it resulted in the most heartfelt reunion ever. 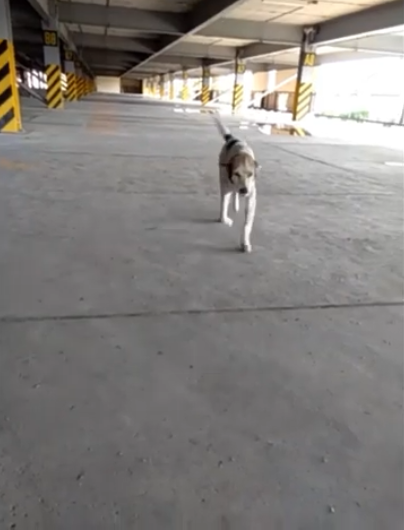 Rustico said that as soon as he saw the dog that was lying on the parking garage’s floor, he knew immediately who it was. Rustico immediately began to cry, so thankful that he’d found his beloved dog. And the two of them had the most touching reunion to be caught on camera. He added that the two of them were crying out of joy.

Despite his three-month ordeal, Coco was healthy. He was only a little skinny and dirty from his time on the streets – but it wasn’t anything that a little TLC at home couldn’t cure.

Rustico was never going to give up on his search, saying to The Dodo, “When it comes to having a pet, it doesn’t matter if you’re rich or poor, as long as you have heart and love to them like family. When someone in your family is lost, you never give up.”

And lucky for Coco, his owner’s determination saved him from a tragic life on the streets. We’re sure happy that these two ended up together!

If the video below does not play for you, you can view it on ” rel=”noopener noreferrer” target=”_blank”>Youtube here.