When dogs go missing, it’s a very scary thing. The worry that owners feel is soul-crushing, and it’s what drives them to try to get out and find them as quickly as possible.

June Rountree’s pup, 4-year-old Abby, went missing on the 8th of November. As it turned out, Abby had managed to slip out of her collar and took off. June became immediately alarmed at seeing an empty backyard.

She and her husband didn’t waste any time picking up the search. They combed through the neighborhood in search of Abbey. They even called their local shelter hoping that she’d been picked up. Sadly, they had no luck. But a grueling three weeks later, the unbelievable happened.

June was working a shift at the local Dothan, Alabama Walmart with her co-worker, Danielle Robinette. The two women didn’t think that the shift was going to be that exciting, yet they soon found their attention being pulled to a small dog who was running loose inside the store. Danielle noticed that the dog was not wearing a collar or a service dog vest.

The little canine was agitated and running up to all the people she saw. Danielle followed the pup, who had ambled her way over to the cash register.

As Danielle later shared on Facebook, “I looked up and seen this black dog go running by she was looking at everyone like she was looking for someone I first thought she was dumped and she was looking for her people. Well she was! She ran right up too Mrs June one of the cashiers she was so happy and started crying saying she had been missing for 3 weeks!”

June couldn’t believe it! She was in shock.

As she shared with Tulsa World, she had no idea how Abbey had figured out how to get to her work.

She commented on Daniell’s Facebook post, expressing her deep gratitude at getting her dog back. She said:

“First I would like to thank the good Lord for helping her find her way home to me, I am still in awe. Second I want to thank whoever she came upon that gave her something to eat, she was not starving when she came home. I still cannot express the feeling I felt when she came into Walmart and walked all the way across the front of the store to register #6 where I was. Coco is so happy to have her playmate home, Thankyou to everyone.” 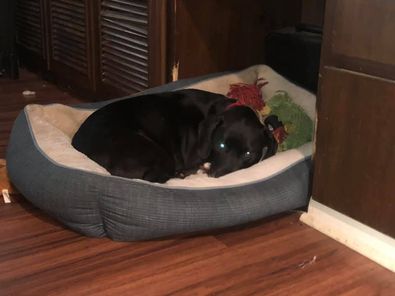 Walmart also took notice of the miraculous story and decided to hire Abby as an honorary Walmart associate.

They shared the news on Facebook, as a way of celebrating the good news.

What a happy ending to a potentially heartbreaking situation! So happy that Abbey found her way back to her person!