Viktor Usov is a 31-year-old medical student who got a most unusual call from a Santa Fe animal shelter. They claimed that they were in possession of Sasha, his cat who had disappeared some five years ago. Interestingly, the cat had disappeared from Portland, some 1300 miles away.

Usov still lives in Portland, Oregon and he was sure that it was a different cat. Since the cat had a microchip, they were able to determine that his name was listed. They also described the cat as being long-haired, black and friendly. It sounded a lot like Sasha.

OregonLive.com said that Usov had adopted the cat from the Organon Humane Society six years prior. She was suffering from a chronically runny nose and distended stomach but acupuncture treatments and a lot of TLC helped to cure it. It wasn’t long before Sasha was a spirited and friendly cat, even with the family labradoodle puppy, Tara.

Usov assumed that the worst had happened when Sasha disappeared during a walk a year after she became a part of the family.

“We waited a week or so, but when we didn’t get a call from the Humane Society and no one returned him, we figured a coyote got him,” Usov told OregonLive.com. “We were upset but we moved on.” 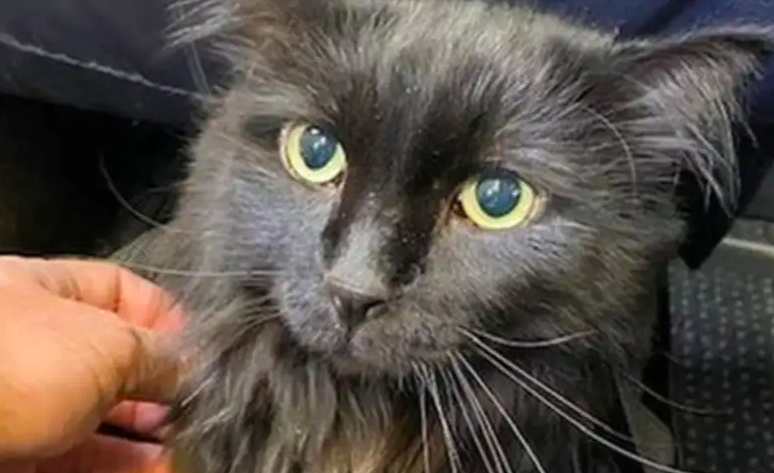 Sasha was able to get to New Mexico unscathed, well-fed and healthy.

“How [he] managed to survive to get here is the million-dollar question,” Santa Fe Animal Shelter spokesperson Murad Kirdar told the Santa Fe Reporter. “I can tell you [he] hasn’t missed a meal.”

Kirdar thinks that the cat may have hitched a ride in cars, on U-Haul’s and trains but he also likes to think that she may have been on a sightseeing tour.

“He went on a grand American adventure,” he told KGW. “He stopped by the Grand Canyon, Crater Lake; he saw the monuments, all the national parks, definitely Redwood Forest.”