Dog Rescue Stories: Miley and Jazz Were Abused and Then Dumped By Breeders

Miley (red ears) and Jazz (white ears) were never in a shelter. They were owned by breeders who often dump dogs on our road.

He found them playing in the middle of the road and drove by them once. Then, he thought about how cold it was and the possibility of them being hit by a car, so he turned around and chased them until he got them into his car. 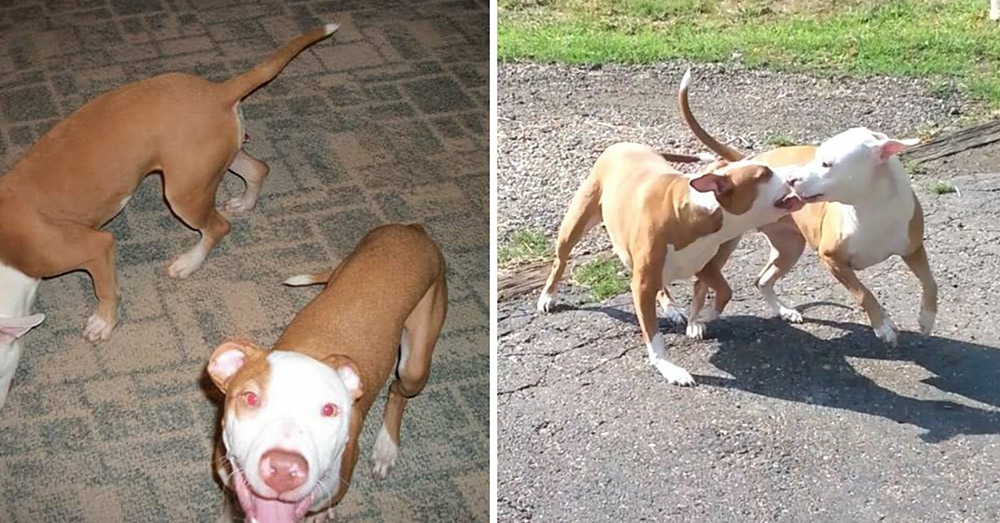 Miley and Jazz were incredibly malnourished and were terrified of humans. They would hunker down with their tail between their legs when we tried to pet them. They would huddle up in a corner together, and they were SO hungry.

Of course, we fed them and loved them as much as they would let us.

Miley was the thinnest, and we figured out that she was saving all her food for Jazz. We set out two bowls of food, but she let Jazz eat until she was full. Then, Miley would eat what was left, and even though they have plenty of food now, Miley still hides food for Jazz.

They slept and ate for two days after they first arrived, and it was clear that they had issues from being abused and neglected. Jazz used to run away every chance she got. She got out one day and we chased her on foot for three hours!

We showed them as much love as we could and made them feel safe. After she felt safe, Jazz stopped trying to run away. 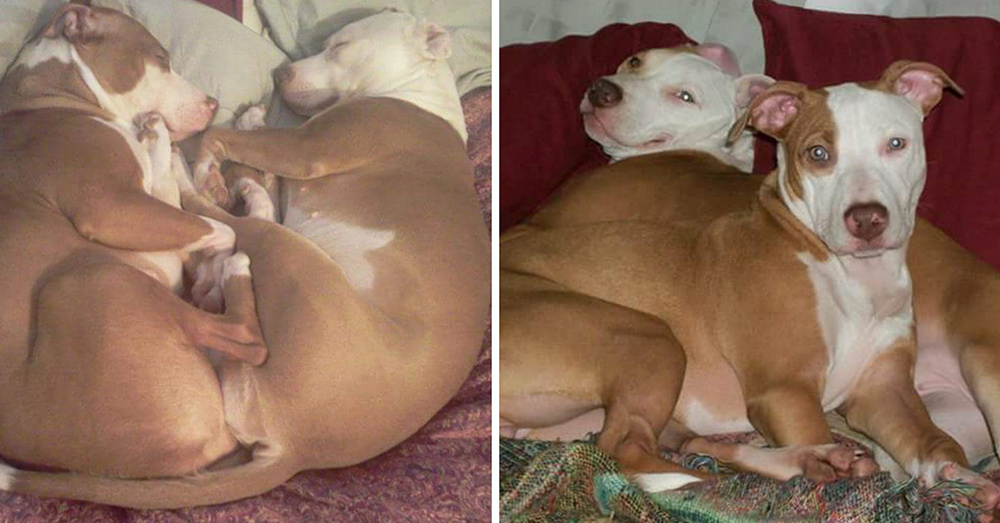 We had no clue what breed Miley and Jazz were because we’ve never had pit bulls. Once we figured out that they were pit bulls, we were shocked.

We had always believed what the media said about pit bulls being mean, but Miley and Jazz were the most loving dogs we had ever met. Our beagles had more aggression than these two.

Even though we already had a full house of rescue animals (three dogs and one cat), we decided to keep them both. We couldn’t stand the thought of taking them to a shelter and possibly being separated or worse, killed. 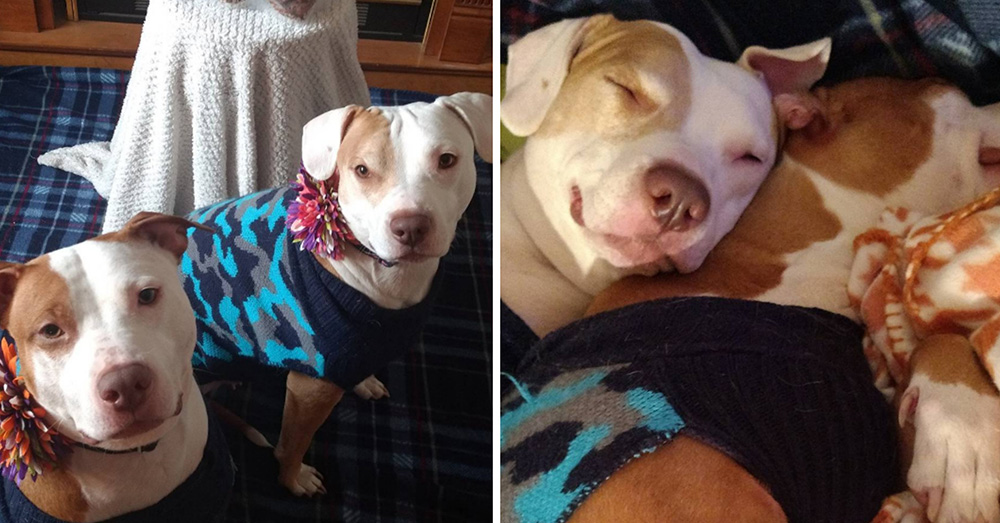 I used to get up every two hours to put them out until they were potty trained. When we first rescued them, we weren’t sure about their aggression, so we kept them crated at night. They would cry and shake, and of course, we felt so bad for them.

We finally let them out at night and now they sleep with us in our bed. 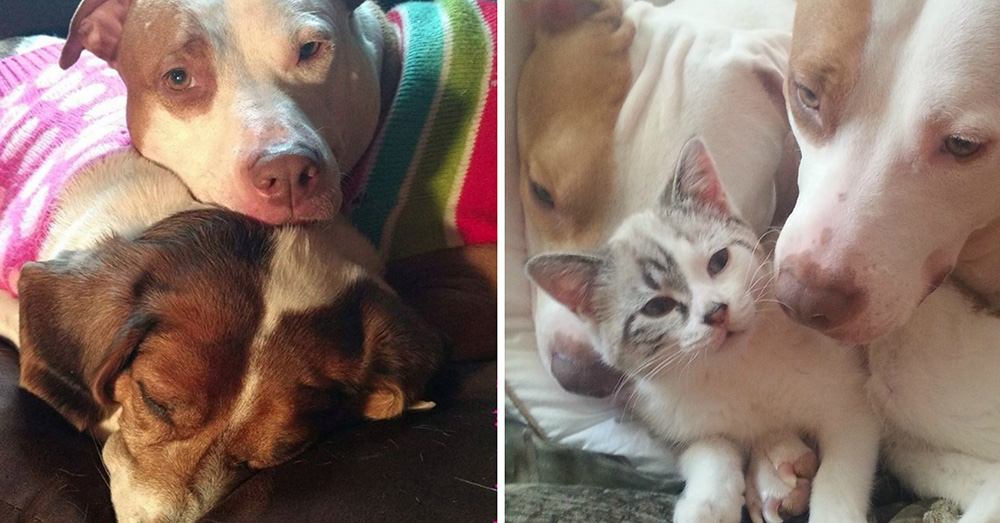 It took a long time to cure some of Miley and Jazz’s fears, and they still have minor issues, which is to be expected. We can’t begin to imagine what these sweet girls endured while with those nasty breeders. It always makes me extremely emotional around their gotcha date.

Now, they love dressing up and posing together…probably because they get tons of treats after! They love running in the snow but they hate rain. And, they love their homemade meals (their favorite is venison).

They are almost ALWAYS together and are only separated if one has to go to the vet. If Jazz goes to the vet, Miley lays by the front door and cries until her sister returns.

They love their big, beagle sister named Chloe and their little cat brother, Muzzy. He was only two weeks only when he was abandoned by his mother in the snow, and Miley and Jazz practically raised him. 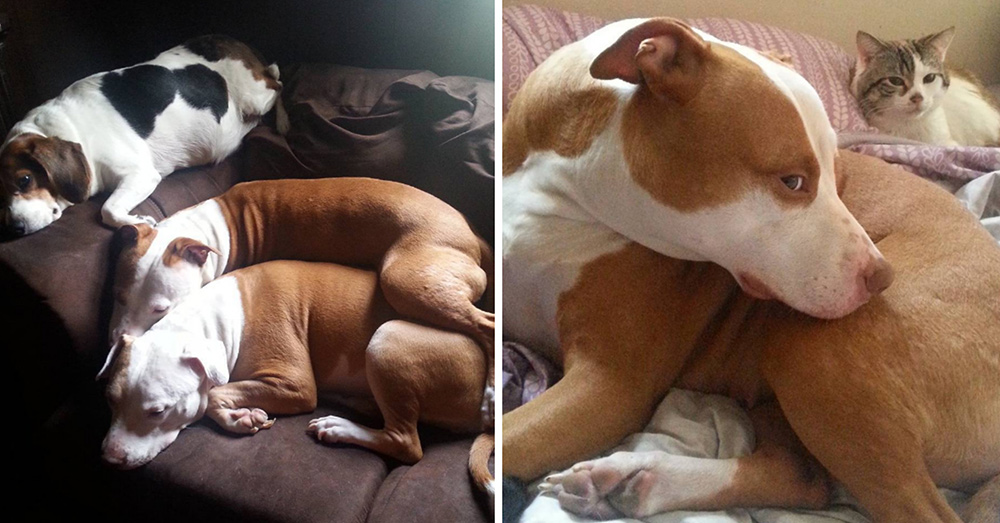 We can’t have children. Sometimes people don’t realize God’s blessings because we are too busy being upset over what we don’t have.

Once you accept it, you will see all the blessings he bestows upon you.

We believe that Miley and Jazz were blessings from God. It was all perfect timing when my husband found them. God blessed us with two amazing, loving Angels who are our kids.

They went from rags to riches — I don’t mean that in a materialistic way — I mean LOVE. We adore these two sweet Angels and are thankful every day for them. They have brought so much love and happiness to us, and we have showed them that not all humans are bad. 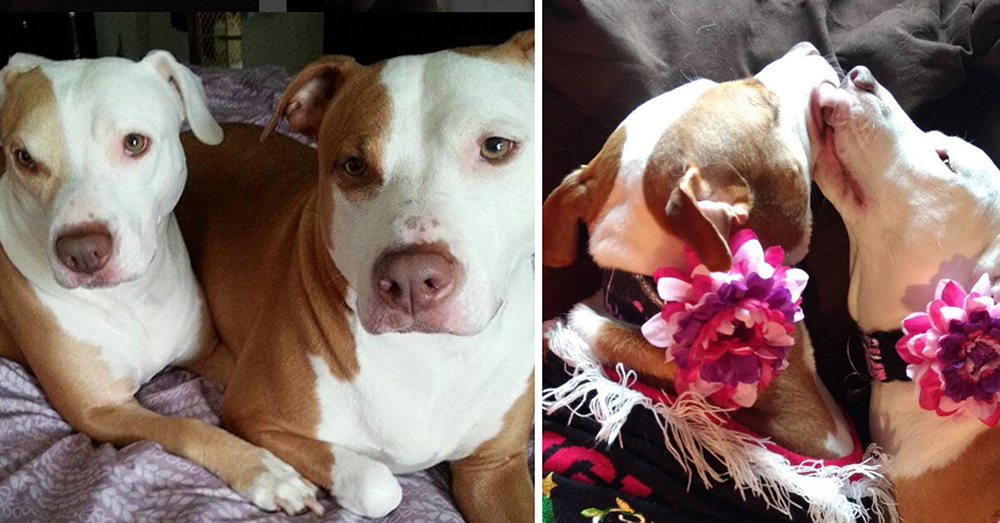