After Being Abandoned At A Fire Station, Dog’s Fortunes Change When She’s Adopted By Miley Cyrus

When a homeless bulldog turned up at a California fire station, firemen could immediately tell the bulldog needed some help. Not only was the dog dehydrated, malnourished, and covered in filth, the lonely pup was endangered by the wildfires raging across the state.

“The crews said she was covered in fleas and smelled really bad,” deputy fire chief Jacob McAfree told CNN. “You could tell she had been out wandering for quite a while. It was obvious that she was abandoned or a stray.”

For the next week, Daisy slept on the doormat outside the station’s front door, which offered this old girl a premier vantage point to greet her new friends on their way to and from battling blazes.

“It was kind of fun,” McAfee said. “[A]fter a while every time they left on a call, the dog would run around to the front of the station where the fire engine pulls out and watch them leave for the call and follow us all around the station.”

But as much as the crew enjoyed having Daisy around, it was becoming clear the old dog needed an actual home. A relative agreed to foster Daisy for a few months, but the dog’s mounting medical bills quickly stymied this arrangement. So the abandoned pup found herself at The Wagmor Hotel and Luxury Pet Spa, which also facilitates adoption. “As soon as we saw her, we knew we had to get her right the vet,” owner/ founder Melissa Bacelar told CNN. “She had skin issues and eye issues and hip issues. She was a mess.” 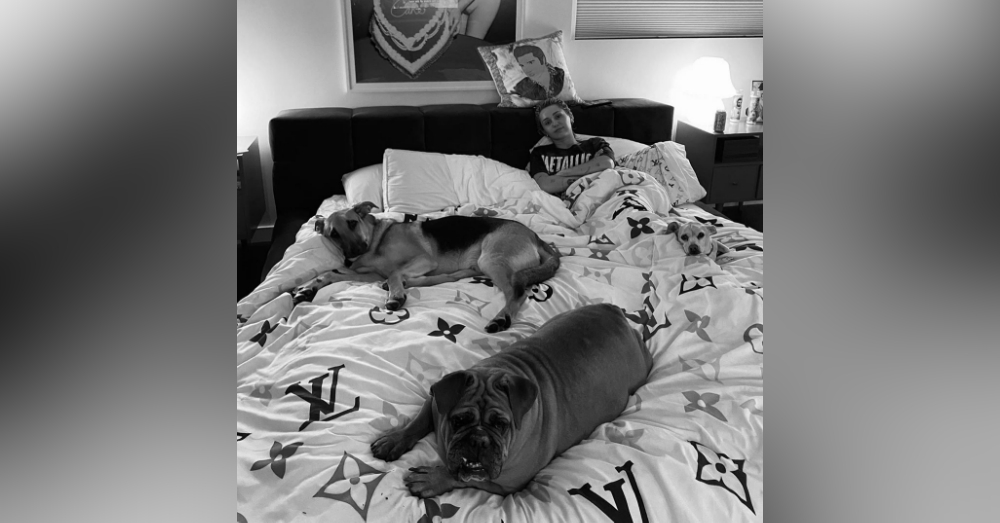 But even after rescuers nursed Daisy back to health, few people seemed interested in giving the sweet dog a home of her own. But one day, the former breeding dog finally got her big break. Singer/actor Miley Cyrus had seen Daisy’s picture on Instagram, and offered to help Daisy find a forever home. “Miley texted me and said, ‘All right, I’m obsessed,'” Bacelar said, recalling the message that would change Daisy’s life.

Cyrus, who had adopted from L.A.-based spa/rescue before, didn’t plan to adopt Daisy herself. But she did invite the bulldog around to the studio where she was shooting a music video, confident someone on set would fall in love and give her a forever home.

My heart is so full. Daisy is officially ADOPTED! And her new name is Kate Moss. Thank you @mileycyrus for always wanting to save the underdog! A month ago Miley text me and said that she has been watching Daisy. She said she couldn’t keep her but wondered if she could take her to set for a day to try and find her a home! A day turned into a weekend. A weekend into a week. And tonight she made it official. This dog was abandoned at a fire station. Her story is beyond sad. She was used as a breeding dog and never knew love. Now she’s part of Mileys ever growing family of love. She will be loved and spoiled. Kate Moss will@never be abandoned again. And let’s seriously shout out @mileycyrus. Her heart is so big!! Love you both. And swipe to see the cutest photos of Mileys other Wagmor adoptee Bo licking his new sisters eyes!!! #love #adoptdontshop #miley #family #wagmorpets #wagmorfam

As it turned out, that person would be Cyrus, who was so charmed by Daisy that she asked to foster the dog for the weekend. “A day turned into a weekend. A weekend into a week,” Bacelor wrote on Instagram. “This dog was abandoned at a fire station. Her story is beyond sad. She was used as a breeding dog and never knew love. Now she’s part of Mileys ever growing family of love.”

Now Daisy, who has been renamed Kate Moss, is “loving life and getting the royal treatment,” says Bacaler, who is thrilled by the homeless dog’s star turn. “Literally this dog went from living on a mat in front of a fire station in Fresno to living on Louis Vuitton sheets with Miley,” she told CNN.

The fire crew who first rescued Daisy were equally excited by the pup’s rags-to-riches story. “It’s symbolic that she stopped at a firehouse, you know,” said McAfee, the deputy fire chief. “Our members took care of her and she ended up having kind of a Cinderella story.”