Floyd Mayweather’s Pet Tiger Is Making People Uncomfortable, But Should It Make Them Angry?

Floyd Mayweather has a pet tiger, and not everyone is happy with that, least of all the tiger.

The boxing champion had a rare albino tiger caged for his 40th birthday party, and he’s been seen pulling a smaller one around on a leash since receiving it as a Christmas gift in 2015.

While banned in 42 of the 50 states, owning a tiger is not illegal in North Carolina, Alabama, Delaware, Nevada, Oklahoma, South Carolina, West Virginia, or Wisconsin. In some of those states, people must simply prove they have a driver’s license, while in others, Business Insider reports, particularly Nevada, there are no restrictions at all. 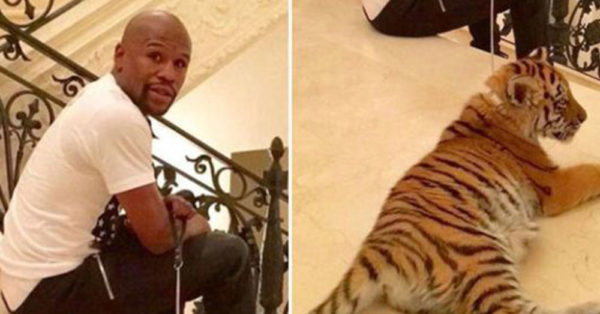 Even for the undefeated heavyweight champion of the world, keeping a tiger as a pet is incredibly dangerous. It’s not only a threat to the owner but to anyone around. According to Big Cat Rescue, captive big cat attacks have left 17 adults and 5 children dead since 1991 and injured 261 more.

Some big cats have escaped and were later confiscated or killed by authorities, but there are likely more that go unreported.

I Told y'all THE BIG HOMIE has TIGERS (Plural) not just one, here is his White Tiger #FRIENDSOFADAMPLANTAREWORLDWIDE #ITHANKGODTOBEABLETOTRAVELTHEWORLD🌎🌍🌏 ##THANKYOUFLOYDMAYWEATHER #THEWORLDWIDEMONEYTEAM🌏🌎🌍

“We do not believe there is ANY acceptable situation for big cats to be pets,” Big Cat Rescue wrote of Mayweather in a Facebook post. “The fact that he is a celebrity makes it even worse in that now many of his fans will think it’s cool to have a tiger as a pet and want to do the same thing. It’s incredibly irresponsible for anyone to think these alpha predators would make good pets. We believe it is cruel and abusive for anyone to own a big cat as a pet.”

Even with the most docile animal, big cats require a high amount of attention and resources that most people just aren’t prepared to handle. One Green Planet maintains that after the modest $2,500 asking price of a tiger cub, a sturdy cage for $1,000, a transport vehicle for $15,000 or more, at least 5 acres of land, and a large fence, you still have to think about food.

“You can expect to invest almost $22,000.00 your first year into owning a small- to mid-size wild cat, and your annual expenses will cost you around $2,300.00,” the site reports. “If you want the big cat experience, the set-up cost is over $94,000 and the annual care is over $8,000 IF you have no emergencies and no one gets hurt and sues you for millions of dollars.”

It’s unknown how much money or time Mayweather spends on caring for his tiger, but there is plenty of reason to believe a fight with a big cat is not one the champ wants to lose.

Wild animals like tigers, cheetahs, lions, primates, and even reptiles are being taken from the wild as pets across the world. Not only do these kinds of animals not belong in a domesticated environment, they are actually dangerous and suffer greatly by being abused as “pets.”

Click the button below to make a difference and prohibit people from keeping dangerous wild animals as pets.