After Being Left On The Streets, These Three Chihuahuas Found Solace In A Fast Food Parking Lot

Meet Marty, Brooklyn, and Penny, three Chihuahuas that were dumped on the side of a road in California. Struggling to make it living on the streets, these three friends took refuge in a KFC parking lot. There they lived together and were, thankfully, fed by a kindly old woman. It was at this very same fast food joint that a rescuer from Hope for Paws found the adorable trio and began the rescue process.

As far as rescue stories go, this one wasn’t very difficult on the rescuer. Despite the abuse that the Chihuahuas faced at the hands of humans (2 of them had injuries caused by a BB gun), the trio was very trusting. With just some cooked hamburger meat and a little bit of coaxing, the trio easily approached the rescuer with Marty taking up the lead. It wasn’t long before the rescuer was able to get the three situated in a crate so that they could be brought to the Hope for Paws facility. There, the trio were given baths and showered in some well-deserved love. 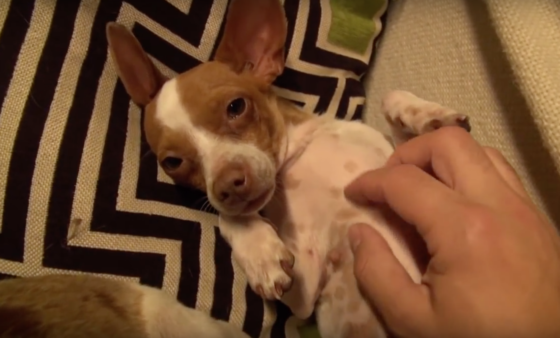 The three friends were all set and ready to head to their foster home, courtesy of Wags and Walks. Sadly, Penny passed away due to heart failure just four days after her rescue. Marty and Brooklyn did continue on to their foster homes and are living happy lives. Penny will be missed, but at least she was able to live the last of her days filled with love.