Veteran Reunites With Dog He Found Near An Airstrip In Iraq

While serving in the Army overseas, Cameron Martin recalls seeing a pack of dogs roaming the grounds near an active runway in Erbil, Iraq. One in particular, named Sunny, proved craftier than the rest.

“Every morning, when I’d go up the ramp to prep the aircraft, I’d see Sunny near the runway. It was so hot outside that he would lay in the mud to stay cool,” Martin said in a press release. “I started calling him and moving towards him. Sunny eventually came to me with his goofy run and let me pet him right away.”

“After that, he kept coming around, and I fed him each day,” Martin recalled. 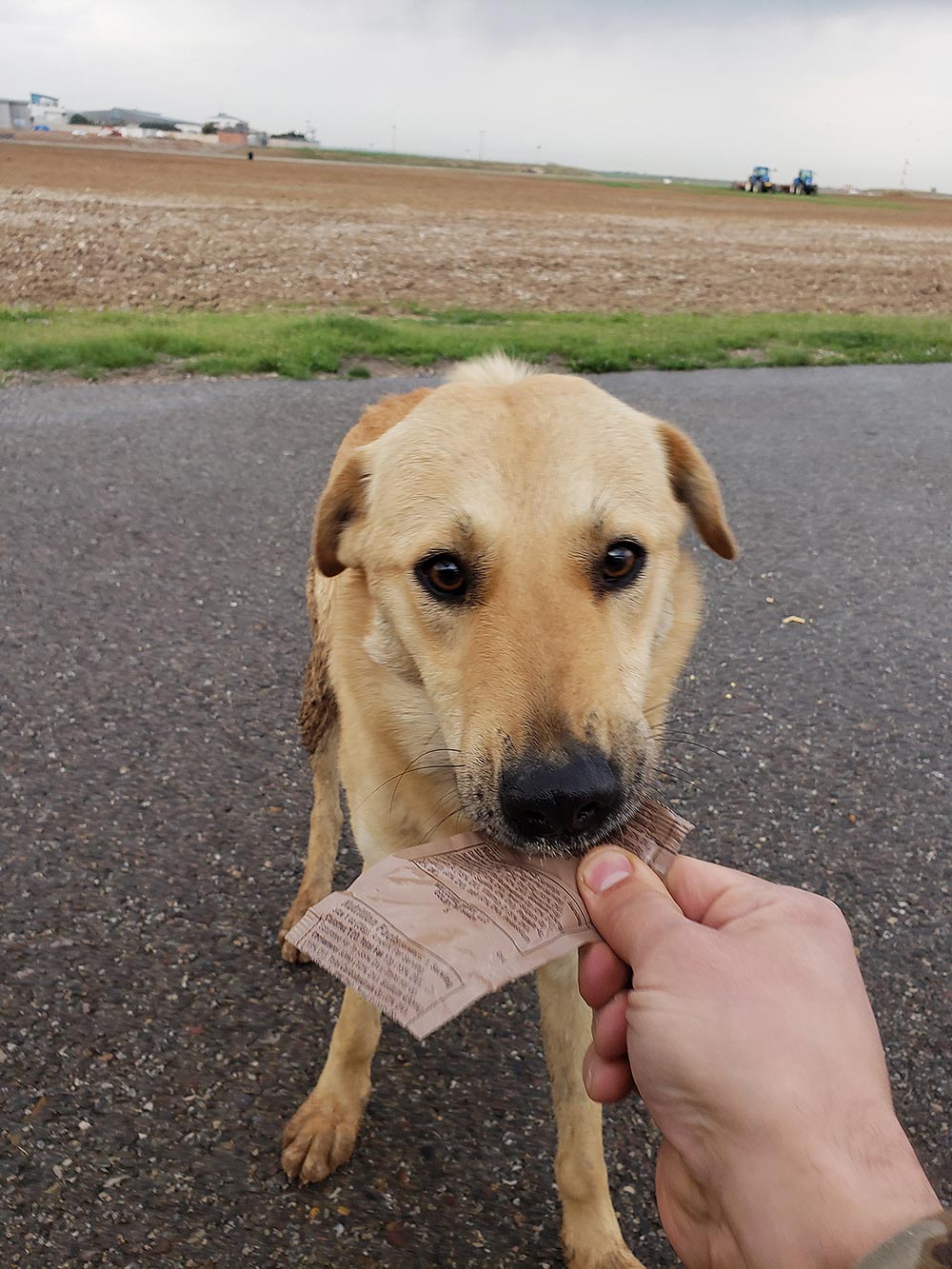 Source: SPCA International
While serving in the Army, Cameron Martin met Sunny near an airstrip in Iraq.

Sunny disappeared for about a month, People reports. When she returned, the soldier kept a closer eye on her. Martin would visit Sunny every day until he was told his time in Iraq was over.

Distressed by the thought of leaving his new friend behind. Martin got in touch with a group that could help.

“I became attached to him and began to search for ways to take him home with me,” Martin said. “That’s when I found SPCA International and applied to the Operation Baghdad Pups: Worldwide program.” 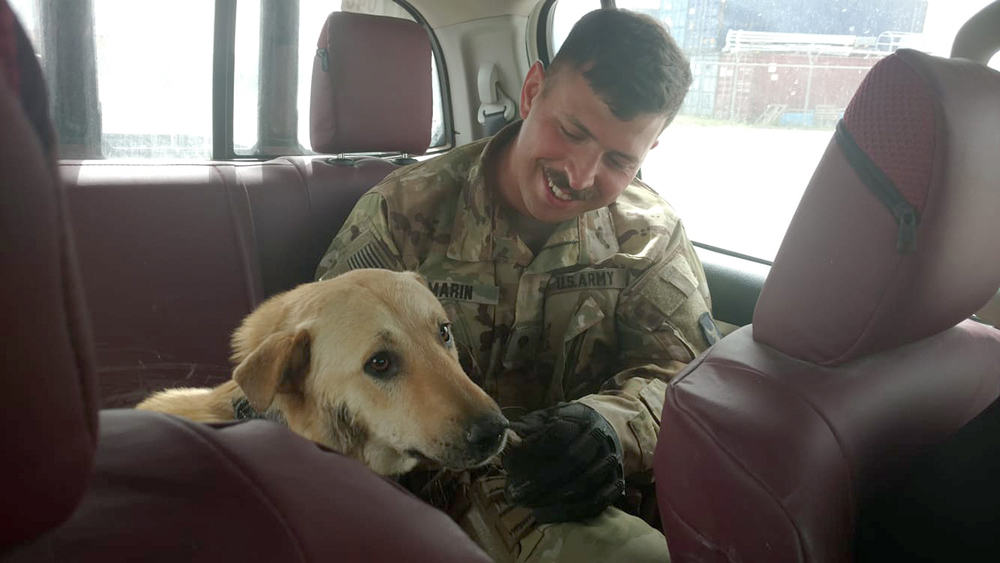 Source: SPCA International
Martin made sure to visit Sunny every day until he was sent back home to New Hampshire.

Martin connected with the local animal shelter in Erbil, who helped the veteran reunite with Sunny.

“I’ll never forget the day that I had to scoop him up and get him to the shelter,” Martin said. “I found Sunny laying in the mud, as usual, and my friend drove the truck up next to him. I pulled him out of the mud and into the truck. He buried his head in my lap, covered in mud, smelling terrible, and I held him closely because I knew he was afraid.”

Soon enough, Martin was on his was home to New Hampshire. By that time, Sunny was already waiting for him, having been picked up by the veteran’s wife weeks earlier at John F. Kennedy International Airport.

It was a happy reunion. 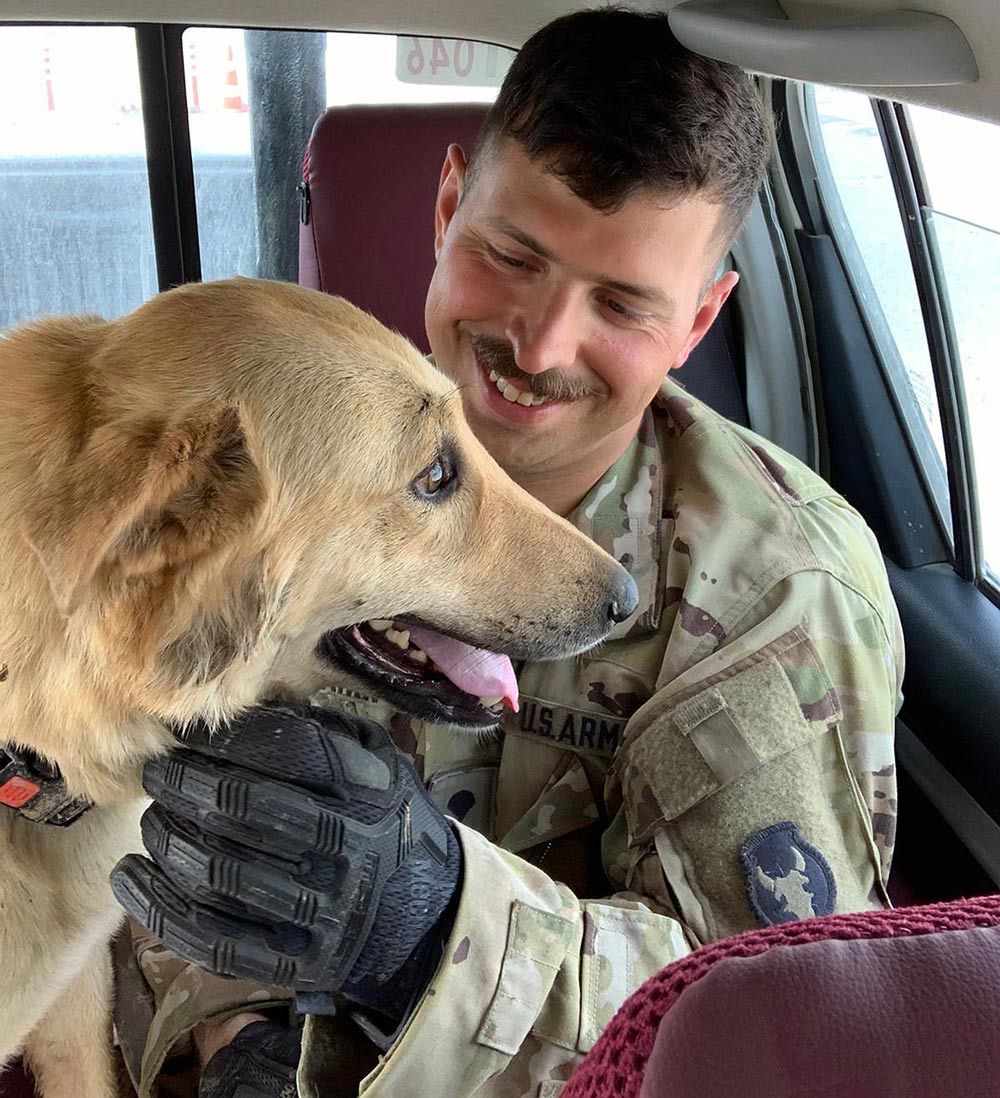 “He was so excited to see me that he started wiggling all over, hopping up and down. He even pooped on the carpet!” Martin said.

Living with the Martin family, Sunny is now a sibling to 6-year-old Australian cattle dog, Cowboy Joe. Sunny’s family has grown, and so has his playful spirit.

“He loves to chew antlers and bones and is just as goofy as ever,” Martin said.