Violinist Plays Bach and Beethoven For Dogs Recovering From Abuse

Martin Agee is a man who loves Bach. It is a passion that he shares with his fans – both the two and four-legged kind. His two-legged human fans have heard him playing at Lincoln Center, the Orchestra of St. Luke’s, the New York Chamber Symphony, American Symphony Orchestra, along with many other venues. Soon, he will be taking his violin to play in Hugh Jackman’s world tour and beginning in December, he will be part of the orchestra pit for the Broadway production of “West Side Story.”

While Agee is a well-respected performer, he uses his talents for the benefit of those less fortunate – namely the dogs at the American Society for the Prevention of Cruelty to Animals (ASPCA), where he plays for the dogs some soothing sonatas by Bach, Beethoven, and Handel. 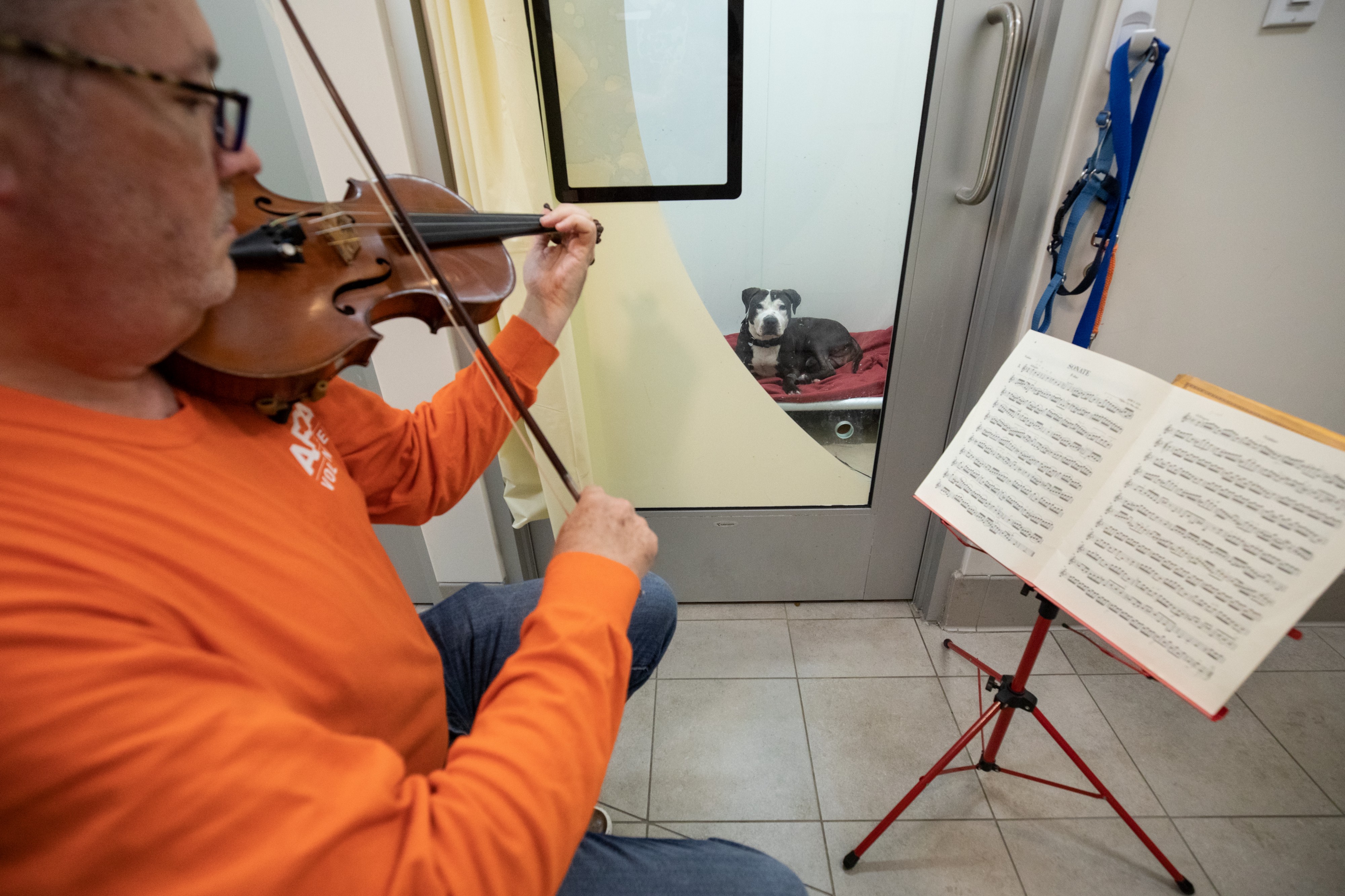 Agee began volunteering with the ASPCA just over two years ago.

“It was at a point in my life that I wanted to reconnect with animals,” he said. “It was a few years after Melody, my greyhound, died.” 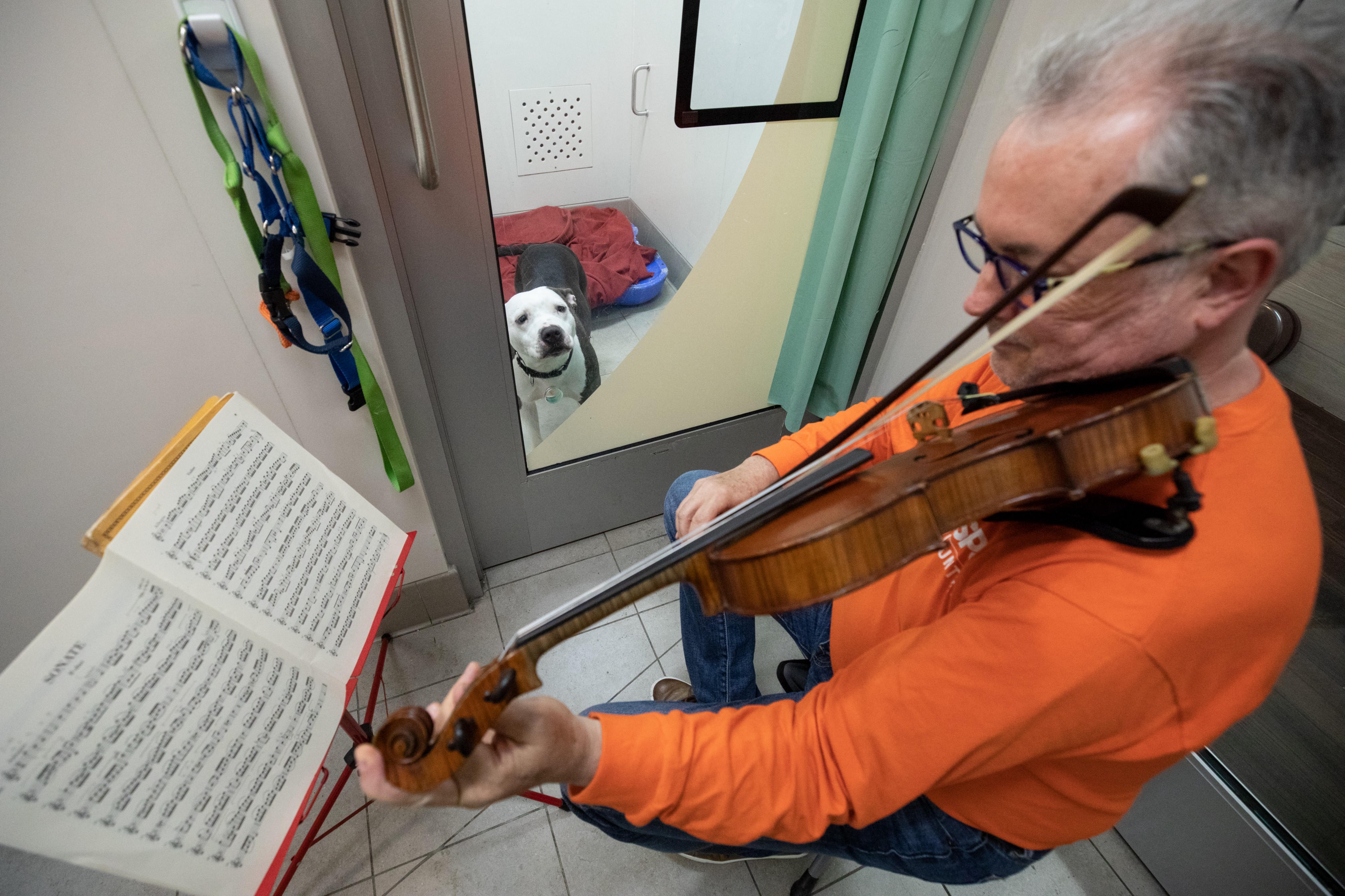 Agee took Melody’s passing quite hard, so he decided to take up volunteering.

“My schedule keeps me busy,” he said. “Volunteering was a good way to be around dogs.” 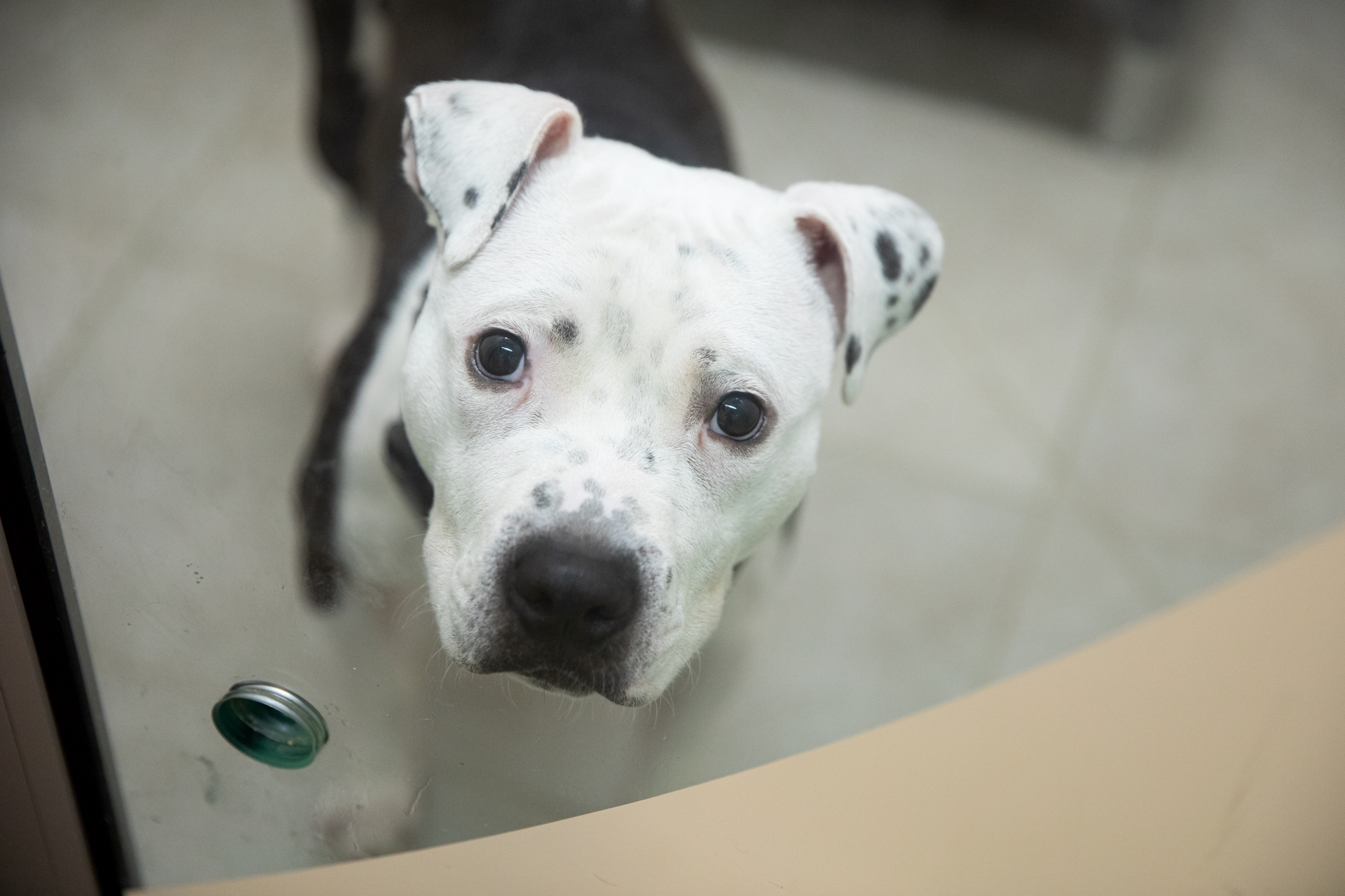 “I took the ASPCA’s orientation training and became an adoption counselor,” Agee recalled.

One of the programs that caught his eye, was reading to the animals. 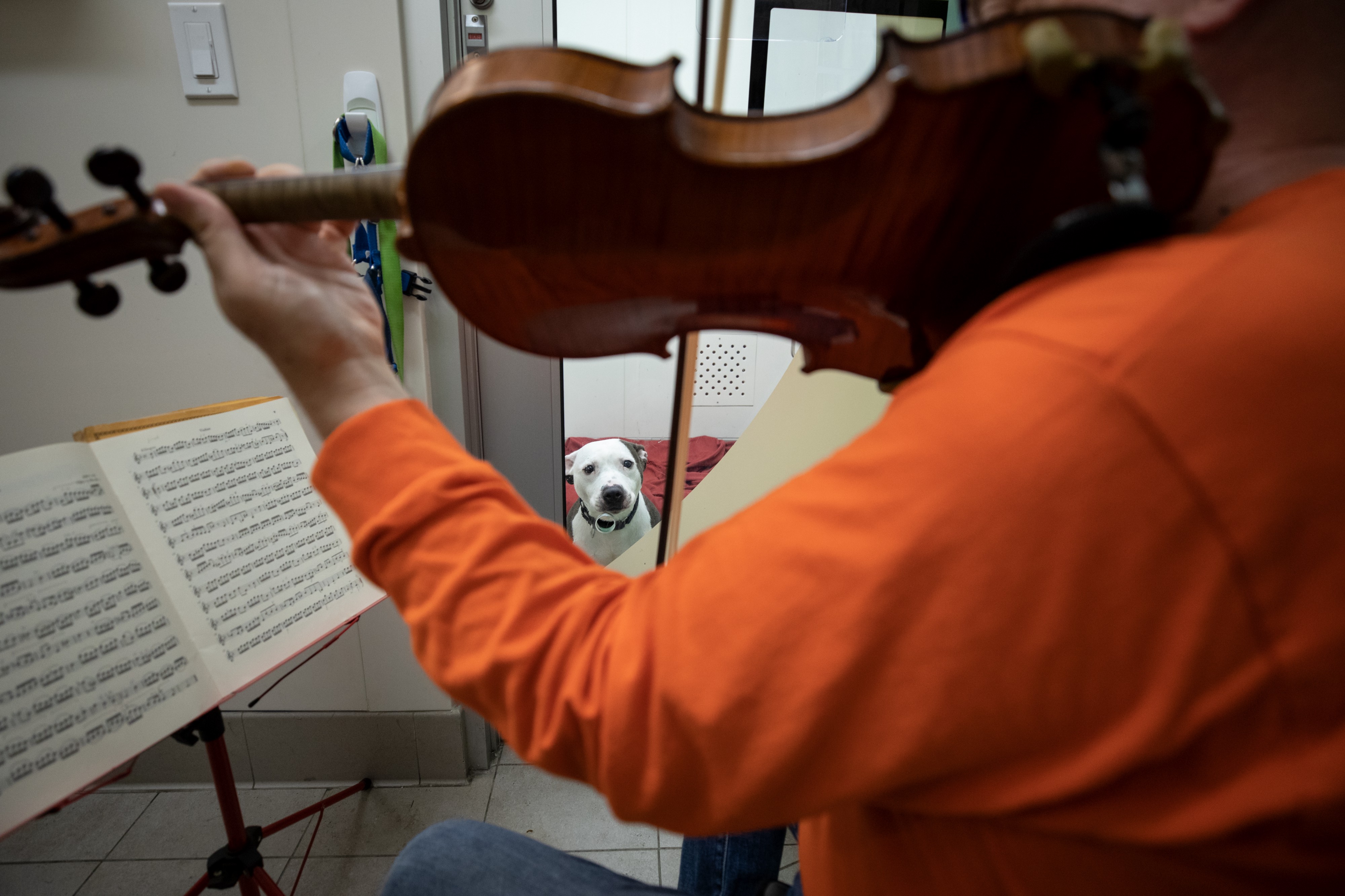 Kris Lindsay, Senior Director, of the ASPCA’s Animal Recovery Center (ARC) and Canine Annex for Recovery and Enrichment (CARE) said, “Storytelling was designed specifically to socialize victimized dogs brought in through the ASPCA’s partnership with the New York Police Department (NYPD).”
The dogs in both ARC and CARE are also sourced through the ASPCA’s partnership with its Humane Law Enforcement and Community Engagement programs. 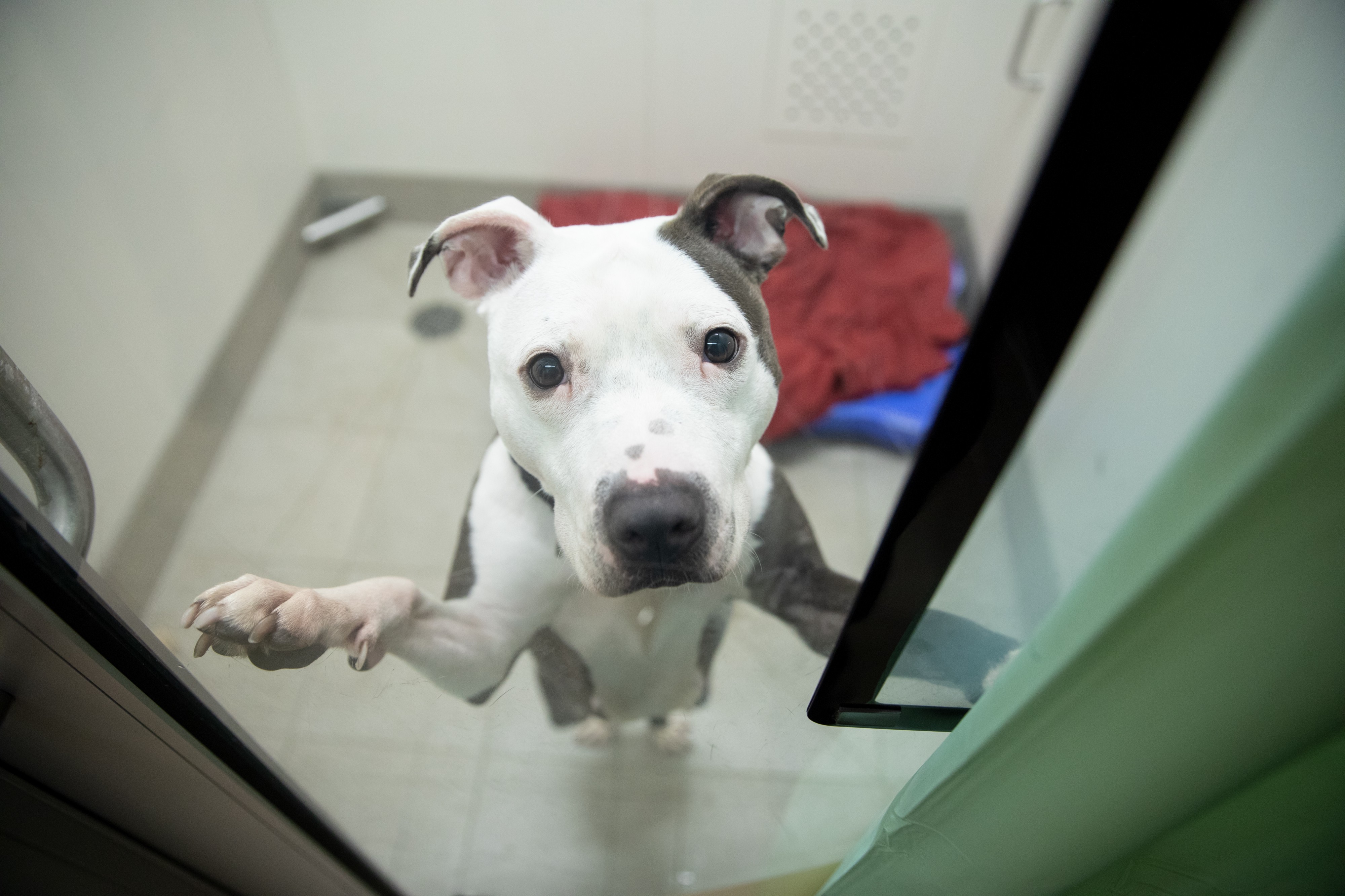 “The dogs often have a wide range of socialization experience, with varying levels of medical and behavior issues,” says Lindsay.

Agee watched as the dogs became calm while being read to by the volunteers.

“A friend suggested I should bring my violin and play for them,” he said. “It wasn’t done before. I thought listening to the violin would relax them and keep them calm. The people at the ASPCA gave me the go-ahead and I’ve been performing here when I’m not working. I come about once every other week. It’s been emotionally rewarding.”

The dogs are excited to see Agee and welcome him by barking. They also scratch at the glass doors that line the narrow hall, which separates the kennels from Agee. He is a tall man, so he sits down on a low enough stool so he doesn’t intimidate any of the dogs. Many of them will cock their heads and start wagging their tails in anticipation. Once he starts playing, some of them will intently watch him, while others take the time to curl up on their beds.

“I get immediate reactions,” Agee explains. “The barking dies down the minute my bow touches the strings. Some will sing along. I take that as a compliment.”
There is an American Pit Bull Terrier that lets out a loud “woo” sound. 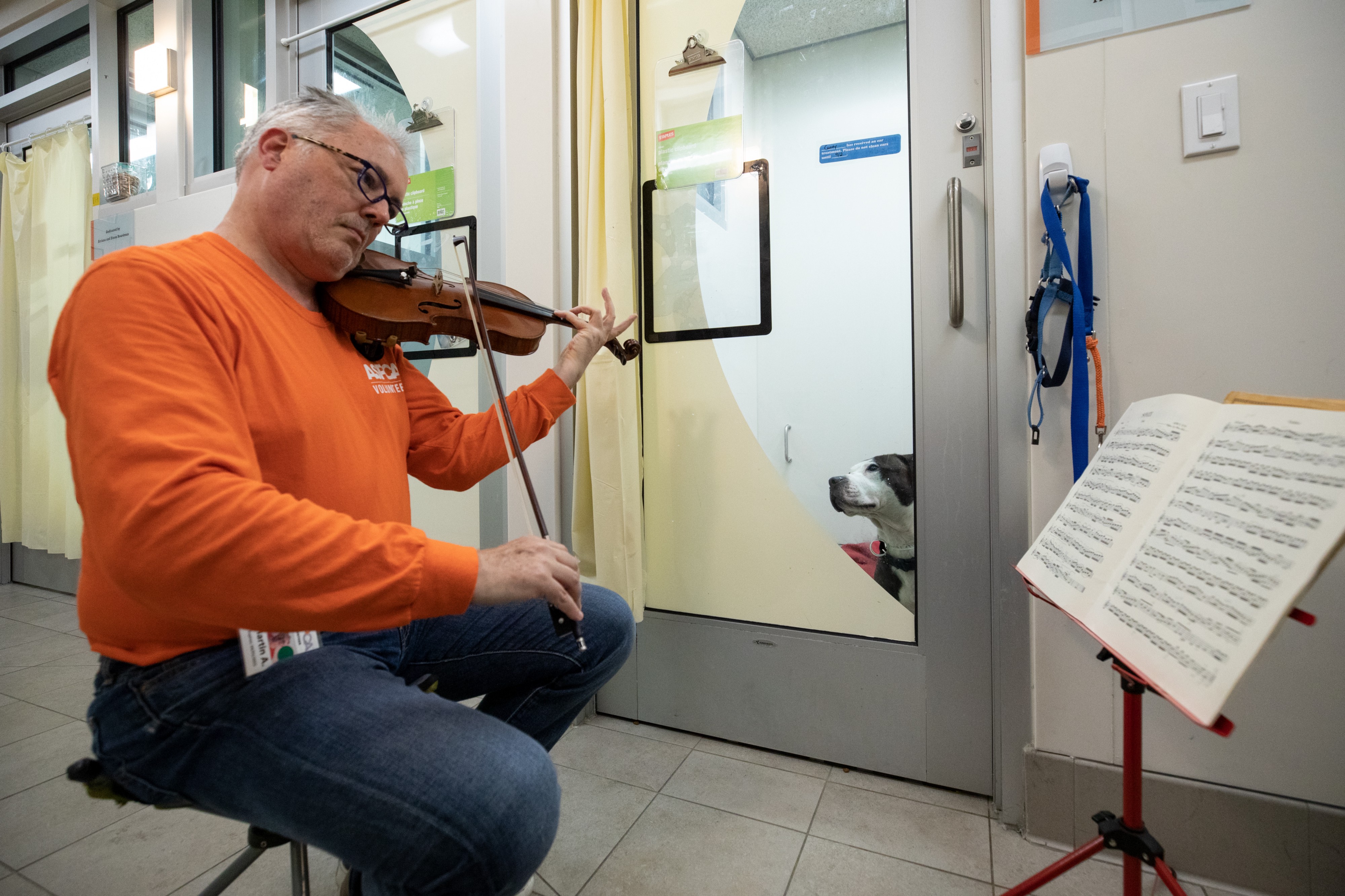 “The Baroque solo violin compositions work because there’s nothing missing,” he says.

“I’ll never forget my first day,” he recounts. “Many of these dogs have been traumatized. Here they enter a process of recovery. We’re being kind to them. Some days, I have to hold back the tears. The dogs I play for, it’s at different stages of their recovery, have been injured and/or neglected. The reactions I get from them, wagging tails, singing, and watching them lie down and relax, is stunning to me. Not all of the dogs react in the same manner. They do seem happy.”

Many of the dogs that Agee works with, have injuries that are trauma-related.

“We see animals who have endured long term neglect resulting in emaciation and chronic neglected medical conditions,” Lindsay says. “We also see animals who have been physically abused and have suffered traumatic injuries such as multiple bone fractures. Some animals require extended crate rest periods so that their fractures can heal. As many of these dogs aren’t even ready to be walked by volunteers, opportunities to socialize through other means are invaluable and help them to trust again. Martin generously donates his time and skill as a performer to our dogs that need the most love, and it’s incredible to see these animals transform into loving pets through our work and the help of socialization activities.” 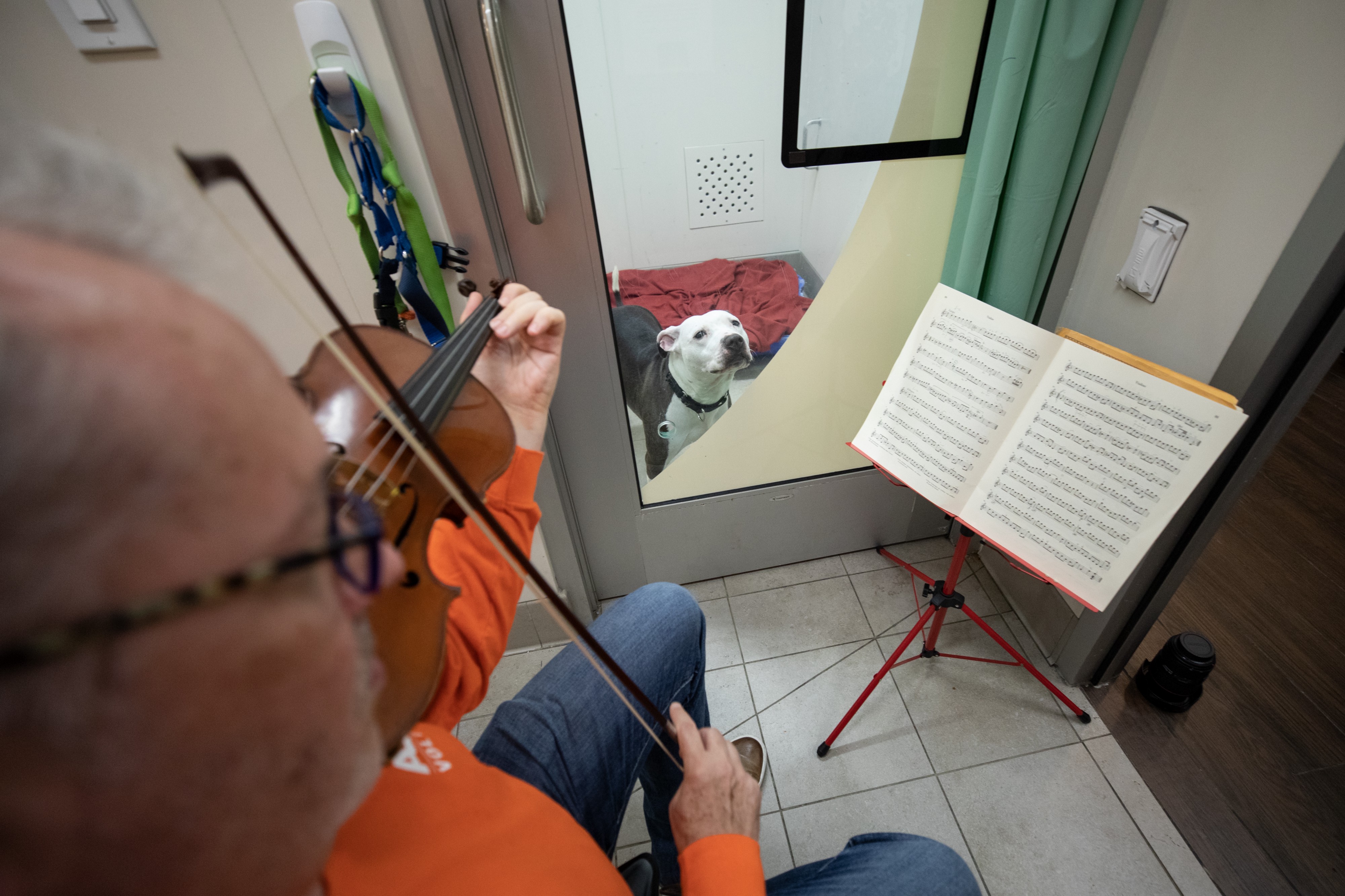 One time, there was a dog that was being taken out of its kennel in order to go for a walk with a volunteer. When Agee began to play, the dog actually sat down to listen, despite being coaxed for a walk by the volunteer. The volunteer waited with the dog for the sonata to be over before resuming with the walk.

This makes it quite clear that everyone – dogs, staff, and volunteers – love listening to Agee play music.
“Through our storytelling program and Martin’s musical contributions,” Lindsay states, “we often see a change in their body language and comfort with new people. This socialization helps to prepare them to eventually interact with potential adopters, as the ultimate goal is for these dogs to transition smoothly to a loving home.”

The dogs aren’t the only one feeling the benefits. Agee himself has said that he derives benefit from the volunteering.

“I feel great playing for them,” he says. “I get attached to a few and [I feel] happy when they’re moved out because that means they’re better.”

When he’s not playing for the dogs at the ASPCA, he’s also entertaining his cat Jack at home. Jack was also a rescue from the ASPCA.

What a lovely man. Thank you Martin Agee for making the animals of the ASPCA feel relaxed and loved with your music.