Most of us know that we should not be leaving our pets in the car – especially on a hot summer day. There was one little Yorkshire terrier who was left in the backseat of a car while the temperatures soared well into the 90s. Luckily for the little pooch, there was a man who was willing to rescue it from the blistering vehicle by smashing the window using an axe. The entire incident was filmed on camera.

The little dog had been left inside a Volkswagen Golf at the Newbury Retail Park in Berkshire, UK, while its owner went on to do some shopping. That is where a man happened to notice the dog who was in need of assistance. The video was captured by a woman named Samantha Heaver, who had some very choice words for the dog’s owner – who clearly did not have any major regard for their pet. The man was finally able to break the window on his eighth try. 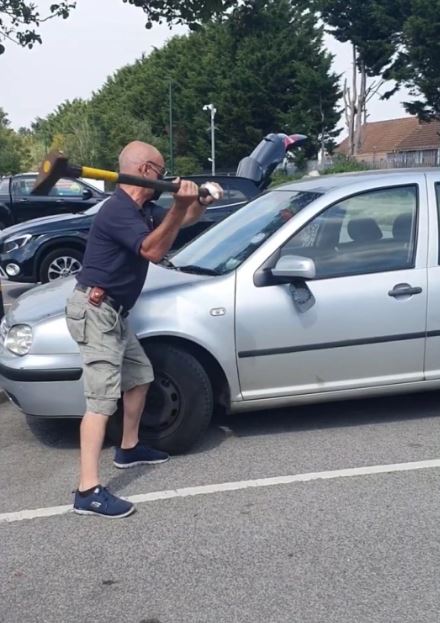 In the background of the video, you can hear concerned people wondering what is happening. Many people stuck around in order to make sure that the pooch survived its ordeal. One woman voiced her concern as soon as the window was smashed that the dog wasn’t peering out the window. Someone tried to reassure her that the dog would be ok, to which she replied that the pup wasn’t looking to be in the best condition.

Apparently, the dog’s owner had been shopping inside Currys with her child for a good 45 minutes before the onlooker noticed the animal in the car. The crowd that had gathered then called in some police community support officers to the scene.

One Thames Valley Police spokesman shared with The Sun that after the dog was rescued from the car, it was given a check-up by a PCSO. Once the owner of the car and the dog returned to the site, they were given a lecture.

The video was eventually uploaded to social media where it quickly went viral with views and comments. There were many people who were critical of the dog’s owner for the way they left their dog in the car. One person pointed out that they should not be allowed to have a dog in the first place. Many of the other comments agreed with this or at least continued this thought process by stating that they’re appalled by the owner’s careless actions.

Furthermore, there was even more praise for the man who broke the window in order to save the dog. One person even stated that they wanted to buy the man a drink for having saved the dog – a sentiment that we can probably all agree with.

Hopefully, this will be a reminder to everyone not to leave your dogs in hot cars.