Man Risks His Life To Save Dog Drowning In Typhoon Floodwaters

Kindness is perhaps the best thing that we can offer someone in need, and this includes animals as well. After Typhoon Vamco, also known as Typhoon Ulysses, hit Marikina in the Philippines, one man selflessly risked his own safety by swimming through six feet of floodwater in order to save a dog who’d become stranded.

At the time that the typhoon made landfall on the main island of Luzon Island, the storm was responsible for widespread flooding and tons of damage. People were told to evacuate and head for higher ground.

But while this was occurring, the anonymous hero stopped and risked his life to jump into the murky waters full of debris in order to save the pooch who was trapped in a nearby home. 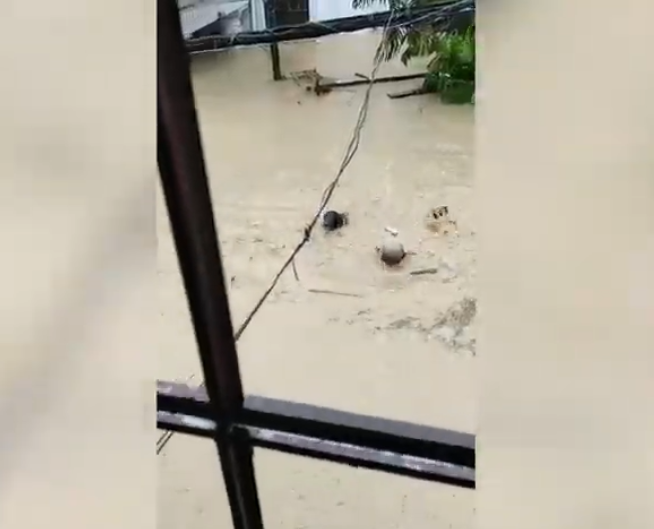 A woman, Sheryl, who was witness to the rescue said that she really “admired” the man’s actions, according to the video’s caption. And his actions were definitely admirable and brave, especially considering that the dog didn’t even belong to the man. As admirable and brave as this may be, it’s highly recommended to avoid floodwaters at all possible costs in the event of a disaster like this. If the man had been unsuccessful in his mission, he could’ve lost his own life, along with the dog, and cost the lives of any potential rescuers after him. We’re so glad that he was able to get both himself and the dog to safety!

You can check out the video of the rescue below:

The devastating typhoon is actually the 21st tropical storm to hit the Philippines this year! The storm managed winds that reached speeds of 80 mph as they ravaged the island, eventually making its way up to the capital city of Manila where there are two million residents. Across other parts of the country, the typhoon caused landslides.

The Philippine Atmospheric, Geophysical and Astronomical Services Administration (PAGASA) supposedly categorized Typhoon Vamco as a category 2 storm and then and issued a signal 3 warning, with the highest warning being a 5.

According to UNILAD, PAGASA warned of “heavy damage to high-risk structures,” as well as potentially “increasing damage to old, dilapidated residential structures, and houses of light materials.” There were also warnings issued about the potentially rampant disruption to electricity as well as communication.

Unfortunately, Typhoon Vamco isn’t the only recent typhoon to pass through the country. Recently, Typhoon Goni, also called Rolly, ended up killing 74 people. And according to a report by The New Daily, Typhoon Vamco has killed 7 people. Hopefully the typhoons will subside so that the Philippines can recover from so much devastation.