Kaleb Bentham would do anything for his beloved rescue dog Buddy. This includes risking his life to save his pit bull mix from a 350-pound bear.

Buddy were playing outside his house in Grass Valley, California, when his owner suddenly had a bad feeling. Sure enough, when Bentham looked outside, a massive bear had gripped his beloved dog’s head in its jaws.

“Honestly the only thing I could think of was ‘save my baby,’” Bentham told CBS 13. “I heard a growl, looked about 75-100 feet down, and the bear was dragging him by his head, had his head in his mouth.” 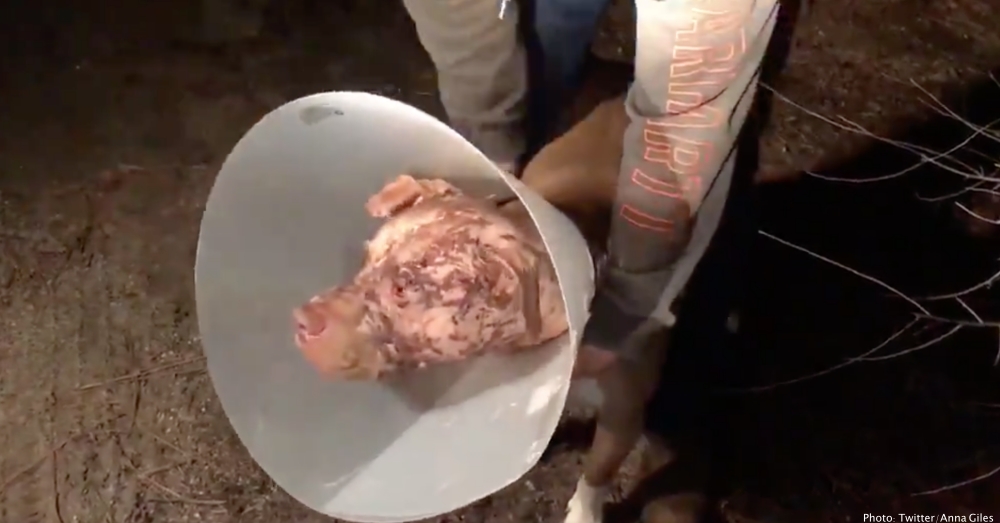 But in this terrifying moment, Buddy’s owner didn’t freeze, panic, or bother calling 911. His only thought was about saving his dog, a beloved pit bull he’d already rescued once from a local shelter.

“I just ran down there, plowed into the bear, tackled it and grabbed it by the throat and started hitting it in the face and the eye until it let go,” Buddy’s owner told the station.

Incredibly, this dangerous gambit worked. The stunned bear was so startled by Benham’s risky maneuver that he dropped the dog and ran off. But Buddy was still in grave danger, and the nearest vet was closed following an outbreak of COVID-19. “My first thought was that I was going to lose him,” his owner recalled.

A man’s love for man’s best friend is a powerful force. Kaleb Benham from Grass Valley took on a 350 pound bear that was attacking his rescue dog, “Buddy.” Kaleb said he heard a growl the saw the bear dragging buddy “by his head.” So he tackled the bear and punched it pic.twitter.com/XAhTrS2AEC

But fortunately, luck seemed to be on Buddy’s side. Benham found another animal hospital that was open, although the dog’s wounds would require stitches, staples, tubes, and hours of surgery, according to CBS 13. Another report noted that the dog’s severed ears had to be stapled back onto his head after this terrifying encounter.

“I just stood there and watched through the window for 3 1/2 for hours,” said Buddy’s owner, recalling those terrifying moments at the animal hospital, where he wondered if his dog would live or die.

Now Buddy is expected to make a fully recovery, but the bear has been stalking his prey. “It made an attack and had it’s food and it’s food got taken from it and it wants it back, I feel like,” said Benham, who has seen the bear back at their house several times in the days since Buddy got away.

Regardless, Benham has no regrets about risking his life to save his beloved dog, who would almost certainly return the favor. “If it was your kid, what would you do?” he said. “That’s my kid, I would die for my dog.”

What would you do if a bear grabbed your dog? Let us know in the comments!