The southern Spanish city of Málaga is known for its beautiful coastline, ancient Arab citadels, and natural beauty. While tourists and trendsetters make their way in and out of the cultural center of the town, just outside the urban landscape, in the hilly wilderness that surrounds the port city, foxes, wolves and other animals run free.

Unfortunately, for those animals that cannot retreat into the protective boundaries of El Torcal Natural Park, Reservatauro Ronda, or the Río Guadalhorce Nature Reserve (just 3 of Málaga’s over 130 naturally protected areas), hunters also take interest in the hills. One such hunter, after leaving a trap set near a dirt road, caught and likely injured a wild fox.

Motorcyclists touring the Málaga countryside stopped to rescue the fox when they passed by, and they posted a video of the rescue to Facebook. 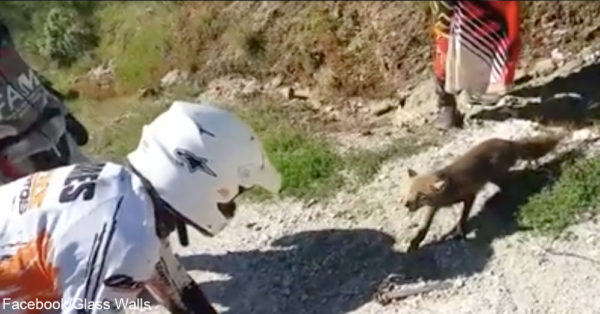 Their kind gesture has not gone unnoticed, either. The video has been seen by more than 1.5 million pairs of eyes since it was first posted by Glass Walls on March 21.

Thanks to the bikers, this wild fox lives to run another day!

Foot- and leg-hold traps have been banned in more than 80 countries because they keep an animal from reaching food or water after being snared, oftentimes forcing the creature to gnaw off its own limb. While they’re recognized worldwide as devices of torture, only 8 states in the U.S. currently ban these traps. Click the button below to put an end to the use of foot- and leg-hold traps, and help protect our wildlife!

Leg- and foot-hold traps are banned in over 80 countries but only 8 states. We can do better!
Sign the petition and tell the Director of the United States Fish and Wildlife Service (USFWS) that leg-hold and foot-hold traps should be banned completely in the U.S.
Make a difference!