When Her Owners Moved House, This Little Ball Of Fluff Was Left To Her Own Devices!

This little ball of fluff was found abandoned at a vacant house. It turns out that her previous owners decided to move and didn’t take little Madison along for the journey. With nowhere to go, Madison stayed at the home she knew, despite it being empty. Thankfully, a local realtor noticed that Madison was still living at the home and made the decision to leave food for her while she searched for some help. Madison lived alone for weeks at this vacant property before the realtor was able to find help in the form of a rescue organization, Hope for Paws. And like always, Hope for Paws responded instantaneously. 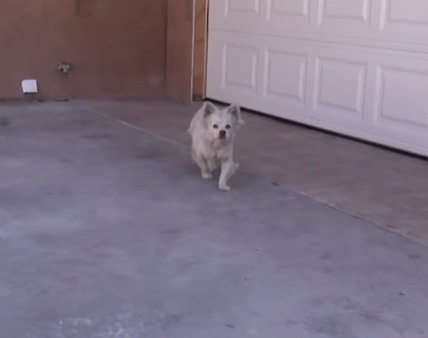 The rescue duo arrived at the property and immediately spotted Madison curled up in a shaded corner. After carefully easing the gate open, they entered the property and attempted to make their first approach. Madison was not happy! She bolted. She ran through a construction area and wedged herself between the side of the house and a wall. The opening between the house and the wall was so small that a human was barely able to fit inside of it! But that didn’t stop this rescue team. One of the rescuers, Lisa, managed to shimmy her way into Madison’s hiding spot. With a calming voice and a bit of food, Lisa was able to get a leash around Madison. After that, it didn’t take long for Madison to trust the rescue duo enough to allow Lisa to carry her out of hiding. 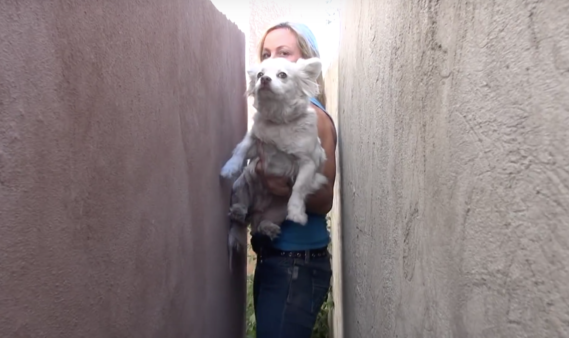 Once safely back to their van, the duo took Madison to the vet where she was given the medical attention that she needed. Shortly after that, Madison found her new forever home that’s filled with lots of toys and lots of love! What more could a little ball of fluff ask for?