When Charlotte resident Jason Gasparik found a chocolate lab near his neighborhood post office on March 1, he knew he couldn’t leave the frightened animal alone by herself. Gasparik took the lost animal home, and then started posting about her on Twitter, Next Door, PawBooster, and Facebook, but nobody seemed to recognize the lonely chocolate lab.

So Gasparik and Roxy headed towards the vet, where the shipping employee was thrilled to find the dog wore a microchip. Gasparik eagerly dialed up the number only to find himself speaking with a Pennsylvania breeder who vaguely recalled selling a lab to someone in Charlotte several years back. Another dead end.

Viewer Julie Holmes shared a photo with us of a man standing on the corner of Ballantyne Commons Parkway and Rea Road in Charlotte Saturday trying to find a lost dog's owner.

Regardless, Gasparik was determined to find Roxy’s owner – even if it meant he had to do things the old-fashioned way. So he wrote “Do you know this lost dog?” on a large piece of cardboard with arrows pointing to Roxy. Then the pair camped out together on a popular street corner to wait. And wait. The next day, the pair returned to the same street corner and waited some more.

This dude literally standing on the corner of Ballantyne Commons and Rea Road today trying to find a lost dog's owner. Good people do exist 🙌👏
(Owner still not found). pic.twitter.com/W81dpQD47n

Finally, Gasparik’s milk carton gambit worked. Roxy’s owner Sam had been driving around the neighborhood looking for his dog Indy when he asked a woman walking a different chocolate lab if she’d seen his missing lab.

Thankfully – because of Gasparik’s massive social media outreach — she had. 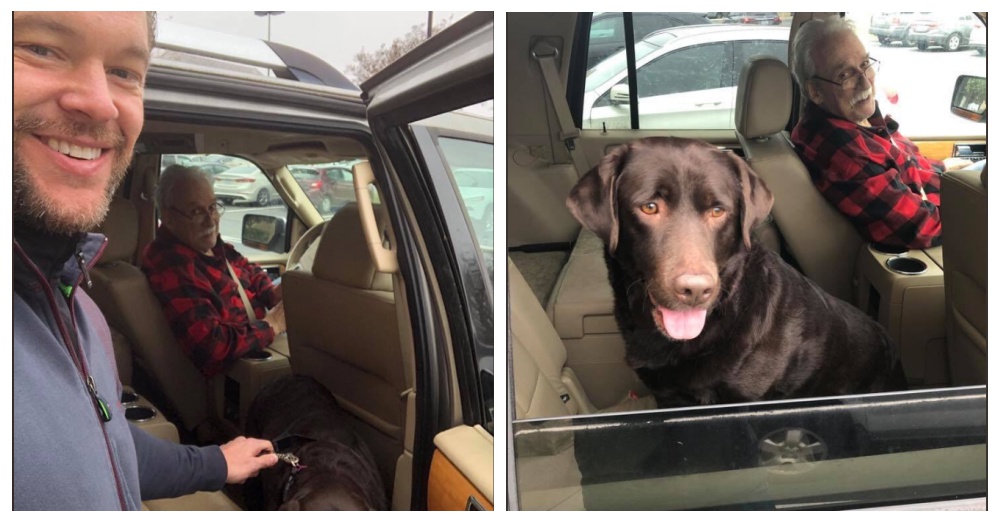 Indy and Sam were both overjoyed to be reunited, but Gasparik doesn’t consider his Good Samaritan stint officially over quite yet. He’s already offered to help Sam by taking Roxy/Indy on regular walks and, of course, by getting the dog’s microchip information updated STAT.