The missing tiger last seen roaming through a Houston neighborhood has been found and taken in by a big cat sanctuary.

For the past week, Houston police have been searching for the 9-month-old male tiger named India who was first spotted by an off-duty officer in his neighborhood.

On May 15, Houston Police tweeted, “We are happy to report that the missing tiger seen in a Houston neighborhood last week has been found and appears to be unharmed.”

Since the tiger cannot be released back into the wild, due to being raised by humans, Cleveland Amory Black Beauty Ranch has offered him a home for the rest of his life.

India will live in a natural habitat and receive a species-appropriate diet at the sanctuary, with as little human interaction as possible.

Noelle Almrud, director of Black Beauty Ranch, held a press conference informing the public that India is now safe. He will join other rescued tigers, like Elsa rescued from a San Antonio home earlier this year. 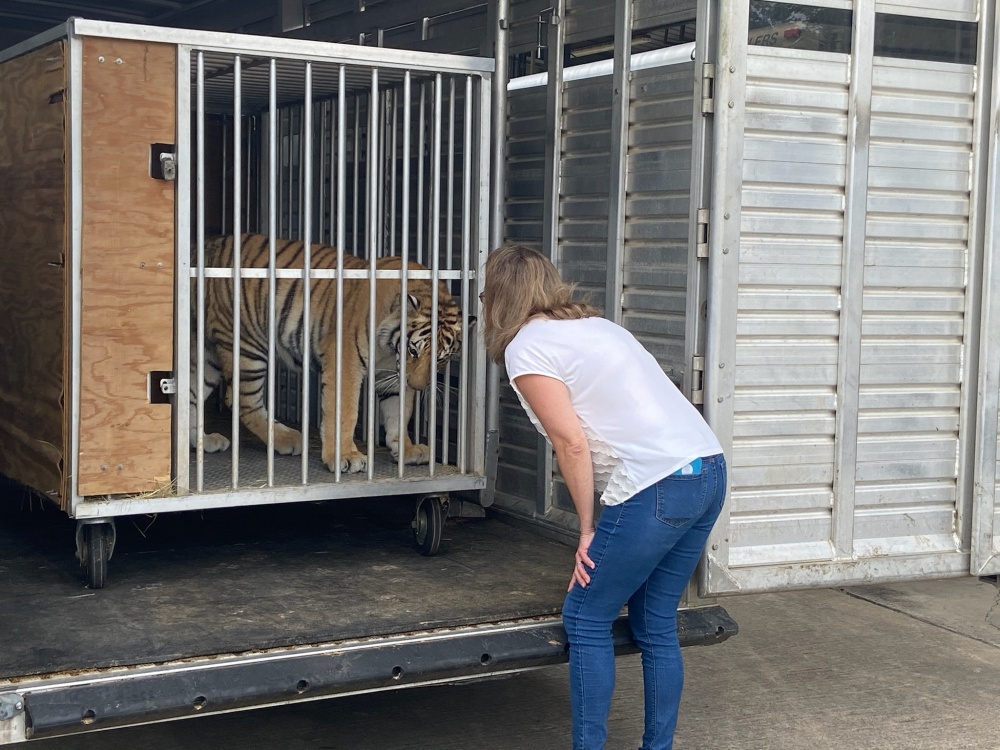 After a short quarantine period, India will be released into his 1/2 acre wooded habitat. He will be able to see other rescued tigers and may someday be able to live amongst them.

“India won’t be treated like a pet on a leash anymore. His collar is now off and he can be the wild animal he deserves to be,” posted the sanctuary with a photo of the tiger’s collar. 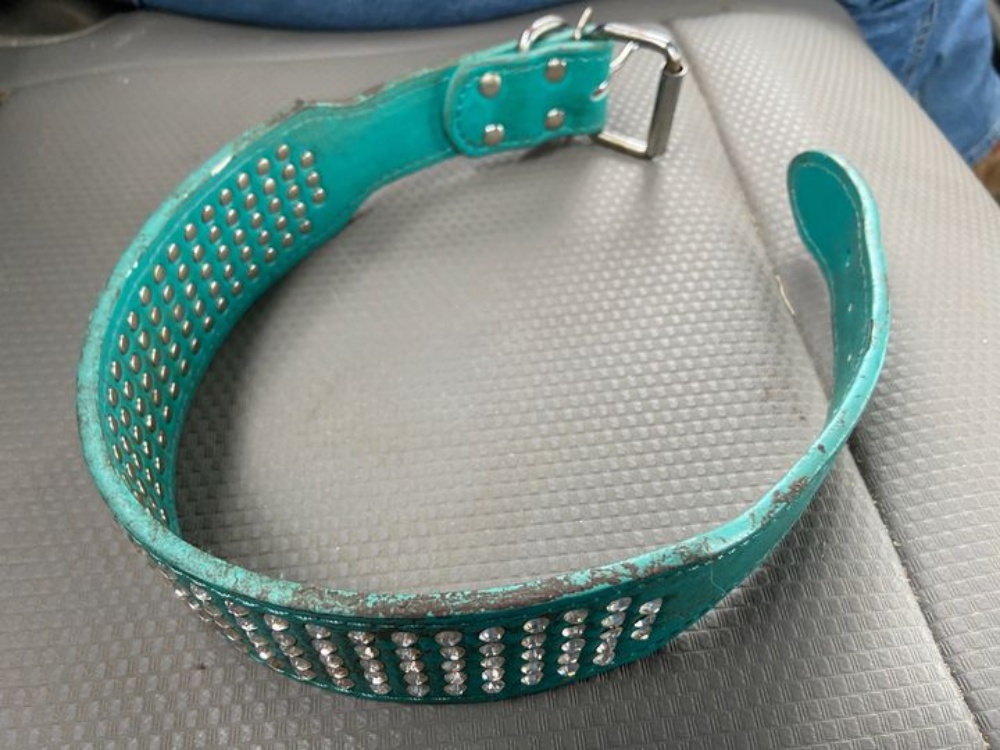 Victor Hugo Cuevas, who police believe is the owner of India, has been arrested. It is illegal to own a wild animal in Houston, but it is allowed in other parts of Texas. Animal activists are pushing for a nationwide ban on private ownership of big cats with the Big Cat Public Safety Act.

“We are happy that Loki and Elsa are now in such good hands here and that we are able to give them a forever, safe, natural home at our sanctuary. Both are thriving with proper space, diet and enrichment to give them the life they deserve, with the opportunity to walk on grass, swim and climb. It is important that we work toward the day when tigers are no longer born into the cruel captive pet trade to suffer at the hands of irresponsible people who have no idea how to care for a wild predator,” stated Almrud. 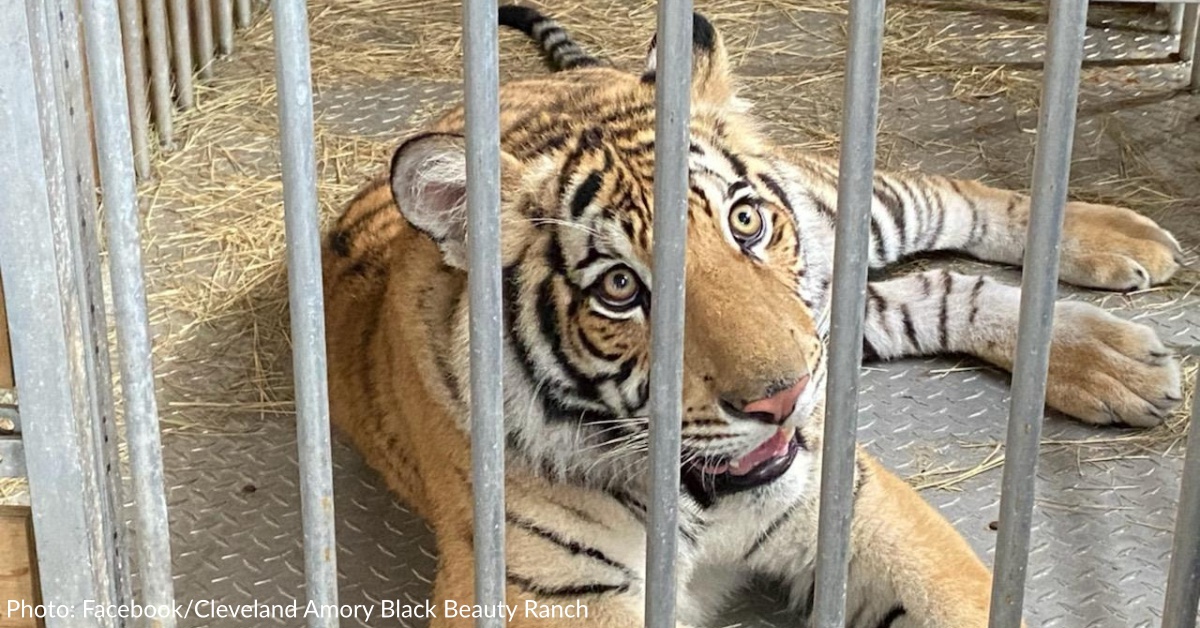 Lauren Loney, Texas state director for the Humane Society of the United States, also expressed the need to pass the Big Cat Public Safety Act for the safety of wild animals and humans.

“Yet another dangerous wild animal was apparently on the loose this weekend in Houston. This inhumane treatment of animals and the public safety risks created by the surplus of tigers in Texas – must end. Each year, in the United States, countless tigers and other exotic animals are bred for the pet trade and are readily available to anyone who wants to buy one. We are working to secure passage of the Big Cat Public Safety Act in Congress, which would ban the possession of big cat species like tigers and lions as pets and prohibit.”

Watch the full press conference about India below and be sure to follow Black Beauty Ranch on Facebook for more updates on India and the other rescued animals.

Big cats are not pets. Sign the petition below. 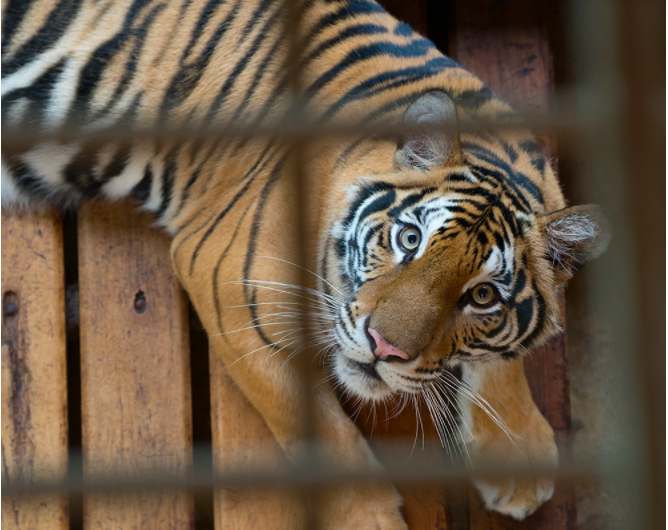 An estimated 5,000 tigers are being held captive in the US. Many are caged and alone while unscrupulous facilities profit from cub petting or photo opportunities. The Big Cat Public Safety Act would break this cycle by outlawing exotic cats as pets and banning the practice of roadside zoos selling photo-ops and cuddle sessions with cubs.
We must act quickly!