This Dog’s Llama Costume Is Ridiculous

Halloween is one of the most exciting times of the year. Some people share their costume plans early, while others keep them a secret leading up to a big reveal on Halloween day. There are parties at school, at work, and in the community, and a wide variety of candy lines the shelves in our supermarkets and specialty shops. Kids get to dress up as their favorite princesses and superheroes, moms and dads enjoy putting their youngest children in costumes, and even pet parents get to dress up their little furry friends (provided they’re cooperative).

Dogs, of course, have one of the most important roles in the Halloween festivities. There’s such a wide variety of dog costumes available, and while we’re not always 100 percent sure our canine companions enjoy wearing their special outfits, there’s no doubt they enjoy the extra attention that comes with them. 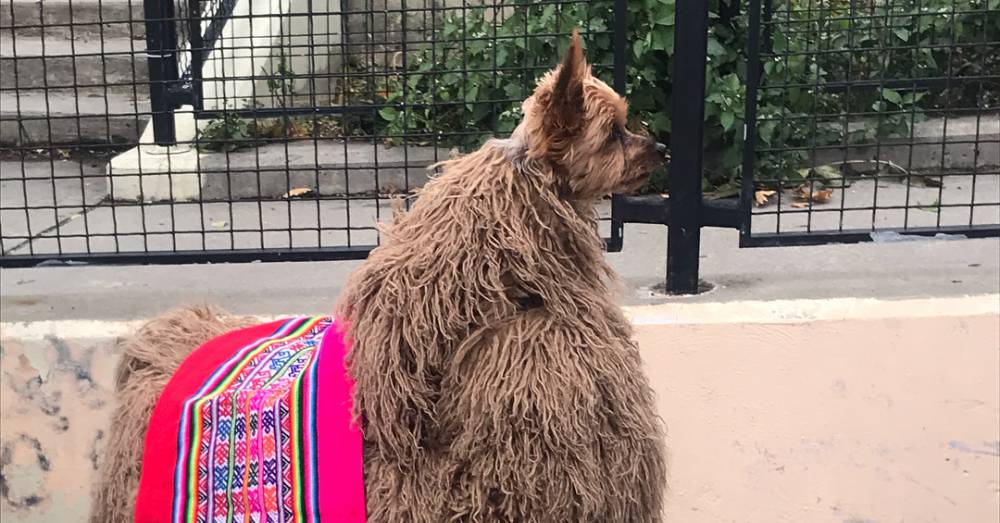 One particular dog, however, really takes the cake when it comes to an attention-grabbing costume. This tiny Yorkie named Chester has a costume several times his size. And when he wears it, he looks like a nearly full-sized llama!

We’re not kidding. This incredible pooch could almost pass for a real llama if his head were only the right shape. Chester’s costume consists of an ultra-realistic llama statue of sorts, perched on a frame with wheels for easy maneuvering. There’s no head on this beast, but there’s a hidden spot in the fake llama’s neck where Chester can sit comfortably with his head poking out to look like the llama’s head. 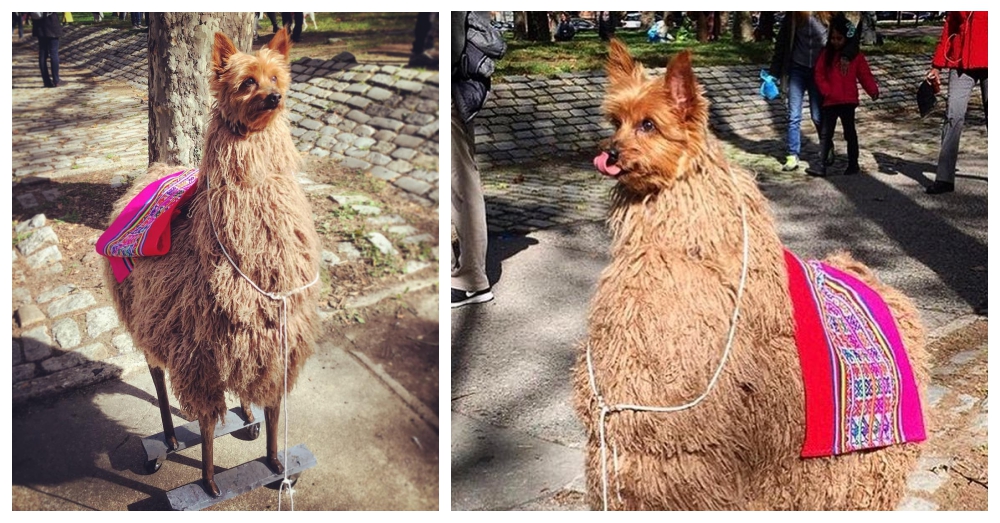 The whole thing is covered in a giant floof of brown llama hair, which becomes the perfect camouflage to blend Chester’s head in with the rest of his enormous llama body. And, of course, a colorful blanket completes the ensemble. 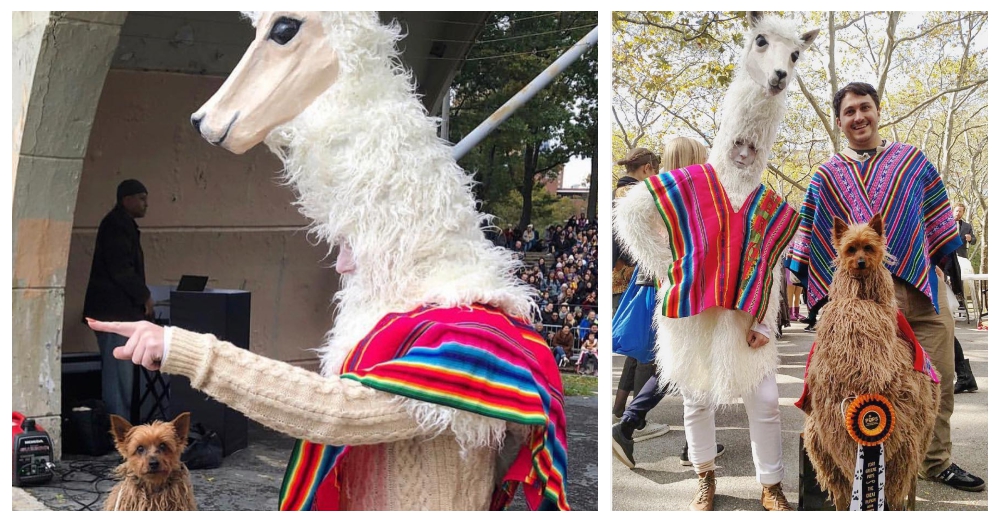 And the best part? This llama won’t be lonely when he goes to Tompkins Square Park to hang out with the other costume-clad pups. His mom is also dressed as a llama to match him.

It’ll probably come as no surprise that the adorable dog and his crazy costume won the 2016 Fort Greene Doggie Costume Contest: The Great Pupkin. We’ve never seen a costume quite like this one before, and obviously the judges hadn’t either! 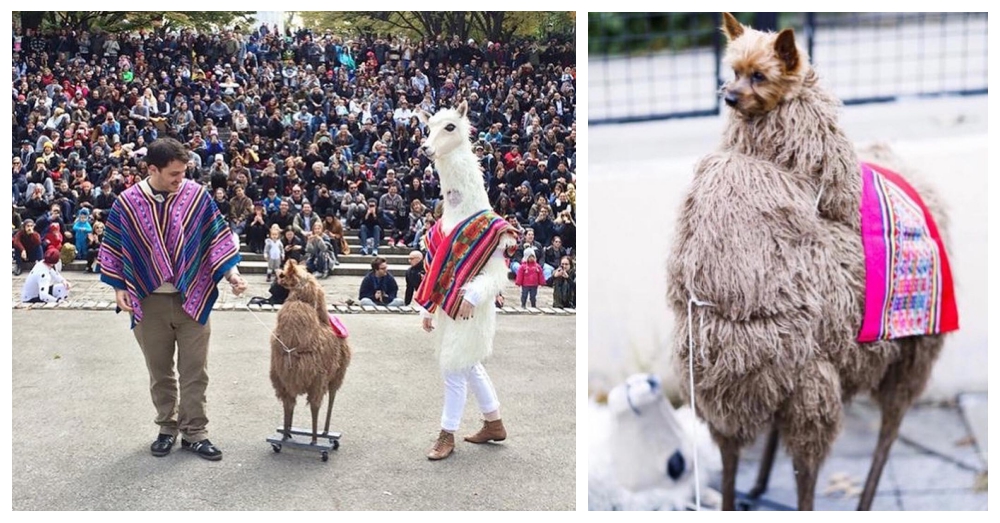 Chester’s face doesn’t give away any particular joy concerning his amazing costume, but he certainly doesn’t seem to mind it either. Perhaps he likes being able to sit up higher than all the other dogs at the event. And he definitely won’t get tired, because he won’t have to walk anywhere. Not to mention there’s no way he could be cold in that giant fur suit! 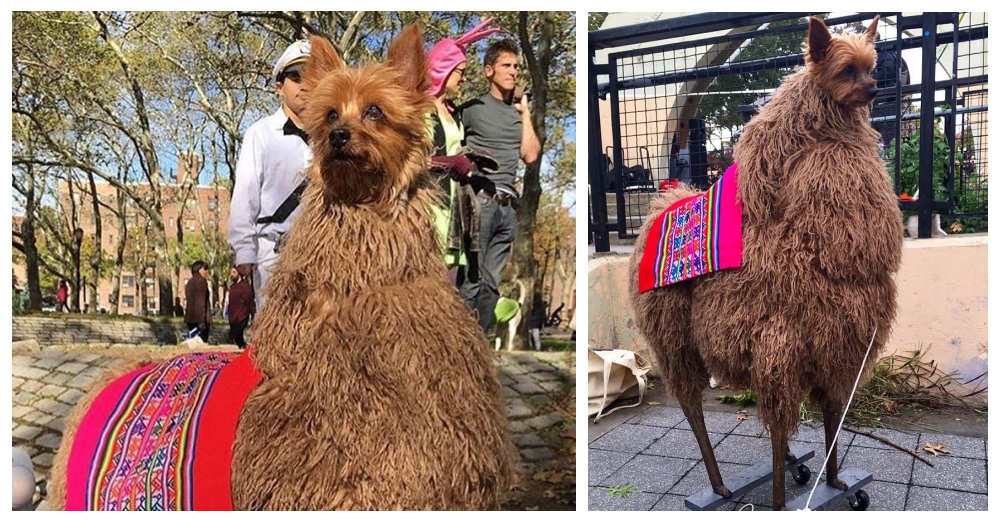 Chester’s mom didn’t have time to make him a new competition-worthy costume this year, but they did show off their llama costumes in the Tompkins Square Costume Parade again for their 2018 Halloween festivities.

Share this story to help this amazing llama costume to make someone else’s day (and maybe inspire them to make an awesome dog costume too)!

10 Halloween Costumes For Cats And Dogs: Click “Next” below!

We’re Giving A Firefighter’s Dog And 3-Legged Kitten Life-Saving Surgery. But We Can’t Do It Without Your Help