A Little Boy Made A Connection With This Dolphin In An Unusual Manner. Now, He Gets To Live Out His Dream!

A seven-year-old boy, named Braedon, saw the movie “Dolphin Tale” starring a dolphin named Winter, who has a prosthetic tail, and instantly felt a connection. This is because Braedon, too, has prosthetics after having to get his legs amputated when he was first born due to an infection. 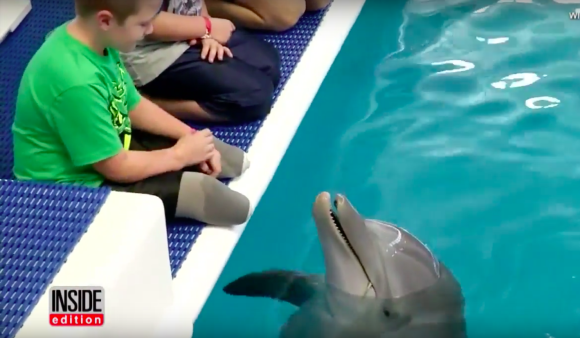 At just three months old, Winter lost her tail after it got stuck in a crab trap. She resides in Florida at Clearwater Marine Aquarium, a non-profit organization who rescues, rehabs and releases marinelife. The Aquarium is a permanent home for Winter, since she is a special case and wouldn’t be able to survive in the ocean on her own. Since Braedon felt such a connection with Winter, he really wanted to meet her in person. He raised money with a lemonade stand, and also with a GoFundMe page, and finally had enough money to fly to Florida to meet her!

Papa Lion Crouches Down To Meet His New Cub For First Time: Click “Next” below!