You May Already Know Her Name, But Did You Know What She Does For Dogs?

Chances are you’ve heard the name Vanderpump at some point in your life.

British-American actor, restaurateur, author and reality television star Lisa Vanderpump has been making headlines for years, with no shortage of success. Her name has become nearly synonymous with Beverly Hills, but it’s the dog meat trade that’s driving her dedication these days.

Vanderpump and her husband, Ken Todd, have been supporting dog rescue for years. They organized a march against the Lychee and Dog Meat Festival in 2015, Today reports. The march was drawn out from L.A.’s MacArthur Park to the Chinese Consulate General, but Vanderpump took her stance in support of House Resolution 752, “condemning the Dog Meat Festival in Yulin, China, and urging China to end the dog meat trade,” all the way to Washington D.C.

While not necessarily animal rights activists, as Vanderpump told the Daily Mail about herself and Todd, the couple loves dogs and cannot abide the torture of these animals, which so often happens when they are consigned to the meat trade.

“It doesn’t matter is you are a republican or a democrat,” a Washington Post intern heard Vanderpump say as she made her case. “Our cause should be everyone’s cause.”

Please join me, Congressman Alcee Hastings, Dr. John Sessa, Peter Li (HSI), Andrea Gung (Duo Duo), Mark Ching (Animal Hope & Wellness) and other activists on September 14th at 8:00 am in the U.S. Capitol Visitor Center, Congressional Auditorium (CVC-200) to discuss the dog meat trade in Asia, the brutal Yulin Dog Meat Festival in Yulin, China, and how we plan to make an impact with the House Resolution 752 The main entrance to the CVC is at “East Capitol St. NE and First St. NE.” Everyone attending will be required to go through security. The full list of prohibited items can be found here: https://www.visitthecapitol.gov/plan-visit/prohibited-items. For more information contact info@vanderpumpdogs.org We hope to see you there! Help be a voice for the voiceless! #StopYulinForever #AwarenessAmbassadors

Vanderpump hasn’t stopped there. The Vanderpump Dog Foundation, founded in 2016, has set forth a mission of improving animal welfare and ending the torture and sale of dogs as meat. And like its founder, the charitable foundation has also been a success, not only raising large amounts of money through extravagant galas, but facilitating the actual rescue of dogs bound for certain death in the meat trade.

As PR Newswire reported in November of 2016, the Vanderpump Dog Foundation was able to transport 5 dogs, rescued from the Chinese meat trade, to the United States, where they would be adopted into caring homes.

“We are so thankful for our donors and the opportunity to give these dogs a second chance at life,” said Dr. John Sessa, veterinarian and founding member of the Vanderpump Dog Foundation. “We hope that this adoption can form as a template for future international adoptions we can execute.” 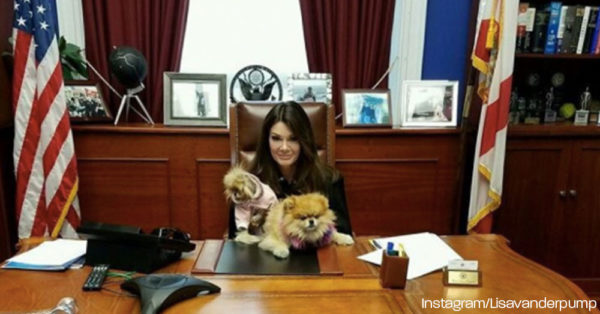 Lisa Vanderpump waits for a meeting with Rep. Vern Buchanan.

According to the Vanderpump Dog Foundation’s website, 80 dogs have been rescued from the Yulin Dog Meat Festival and sponsored by the VDF since 2016. The foundation is helping to provide brighter futures for these animals by working with a Chinese rescue sanctuary, operated by the Shenzhen Dog Protections Association.

World Dog Day, an event created by the VDF and held May 2016, attracted a crowd of 4,000 people and almost 3,000 dogs, the foundation maintains.

The day raised awareness of animal cruelty and rescue efforts around the world. Animal activists Marc Ching from the Animal Hope and Wellness Foundation and Andrea Gung from the Duo Duo Animal Welfare Organization were recognized by the VDF for work in ending the torture of dogs around the world. And it even gave a few celebrities a chance to show off their canine friends.

“I think it’s a day where we all come together and we celebrate the wonderful creatures in our lives,” Vanderpump said at the event. “It’s all about creating noise. When you create noise, you’ll be heard. We are a voice for the voiceless, but I think by making noise, we can implement change, and that’s what we’re doing.”

Perhaps it’s one of the Vanderpump Rules to ever expand your efforts, especially when it comes to caring for canines, but that’s just what Lisa and Ken have done in 2017, opening the Vanderpump Dog Center at 8134 W. Third Street, in Los Angeles.

The new dog center hopes to tackle the growing problem of animal overpopulation in Los Angeles County by providing rescue, rehabilitation, and re-homing support and encouraging southern Californians, and everyone else, to adopt and not shop.

GreaterGood has a new way to help dogs in shelters across the US—care packages! You can provide healthy meals, warm beds, and the proper vaccines to dogs with a care package.
When you sponsor a care package, we will transport nutritious, high quality dog food, beds, and vaccinations to shelters and rescue groups nationwide!
Make a difference!