Living In A Sanctuary, These 4 Lions Formed Strong Bonds, Especially With Their Unlikely Leader!

In a South African wildlife park you will find one of the strangest yet most amazing animal relationships that you will probably ever come across. What is this relationship you may ask, well it is the one between a pride of lions and a human! Their interactions are unbelievable!

The privately owned wildlife park houses an enclosure for a pride of lions. The pride consists of 4 lions and 1 human. And who exactly is the dominant figure in this pride? If you guessed the human, you guessed correctly. These young lions recognize Or Lazmi as their dominant figure and they treat her with great respect and affection. She is easily able to enter their enclosure without any assistance. She plays with them, pets them, kisses them, and even cuddles with them. And they gladly return the favor. It’s absolutely amazing to see.

These lions show Or respect like no other. Or’s great relationship with the lions stems from her knowing them and interacting with them since they were cubs. They grew up with her as their adult figure, and despite the fact that they are now significantly larger than her, the lions still see Or as the adult in their life. The trust that goes both ways is astounding. Or trusts in her lions so much that the park even allows people into the lion enclosure! (As a precaution, there are staff members on standby.) 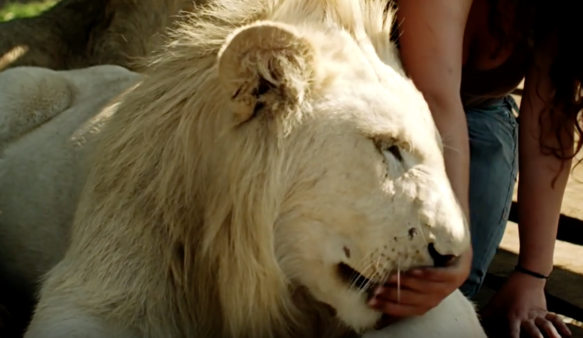 Unfortunately, this close relationship between Or Lazmi and her lions will not last much longer. The park hopes to eventually release these lions back into the wild. They hope to prove that lions in captivity, even those with close relationships with humans, can be returned to the wild again in order to save the species.