Orphaned Kittens and Puppies Get Second Chance At Life, Thanks To You

Shelters and rescues around the country become overwhelmed with unwanted and orphaned kittens starting early spring until late fall in a time known as “kitten season”.

In addition to the influx of kittens and cats, shelters also see a rise in orphaned puppies. These newborns require a lot of extra care and must be bottle fed with special formula every couple of hours. Shelters that are already at capacity need help to save these innocent animals. 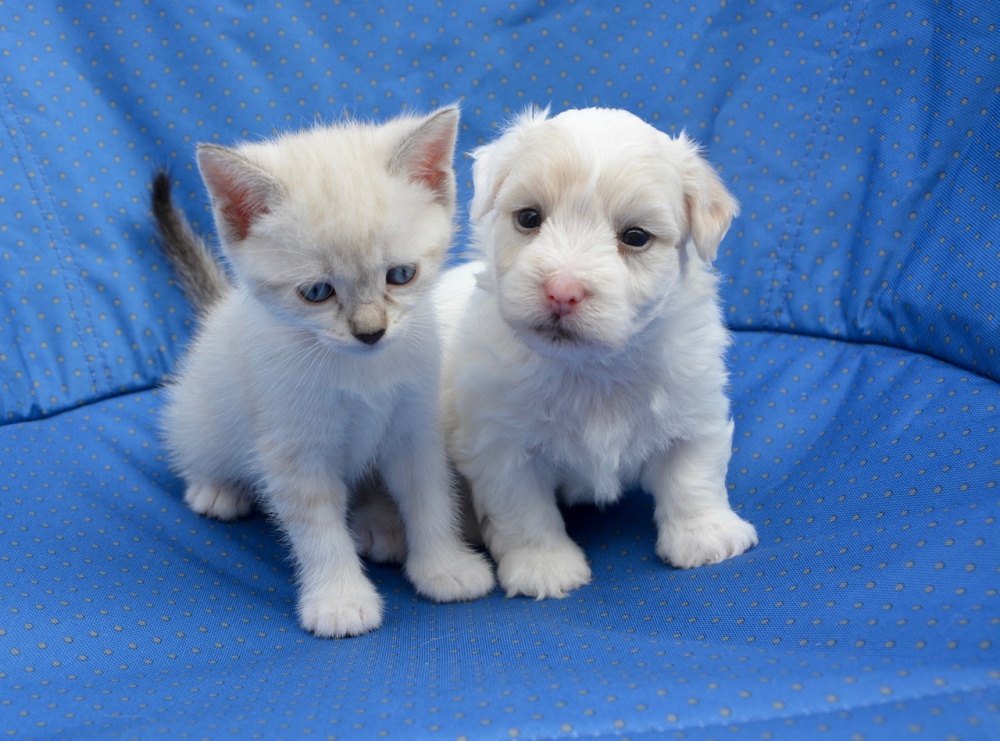 That’s where fosters and generous people like you come in.

Fosters provide round-the-clock care and thanks to people purchasing Life-Saving Formula Kits for Fur Babies, more shelters have the necessary formula and supplies needed to save lives.

Countless lives were saved thanks to you and the tireless efforts of fosters and shelters. Read about some of the rescued kittens and puppies you helped save below.

LifeLine Animal Project, the largest animal welfare organization in Georgia, shared with us how they used the vital formula and supplies to care and feed a litter of orphaned kittens found on St. Patrick’s Day. 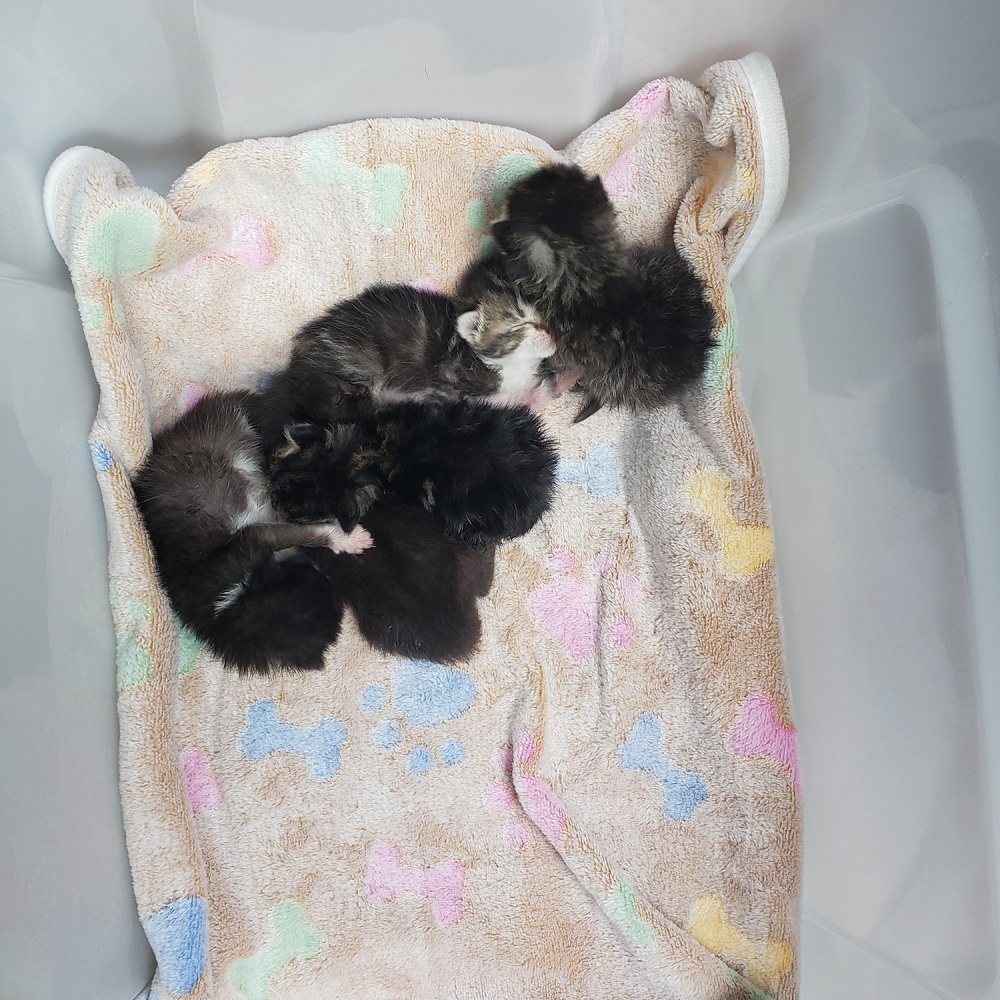 “A litter of kittens was born and discovered in a neighborhood field on St. Patrick’s Day (and, ultimately named by the Fulton County shelter staff as the St. Patrick’s Day Litter). The concerned community member who found them waited 48 hours, and after 24 hours of the mother being nowhere to be seen, picked them up and brought them into the shelter. Once at the shelter, LifeLine’s Feline Foster Coordinator moved them into foster care immediately, and the litter has been bottle-fed with the formula and probiotics ever since. They have responded well to the care and are growing very rapidly! We have every belief that they will all continue to develop and will be ready for adoption in about six weeks. Without a) the good Samaritan’s intervention and b) having the right supplies on hand at the shelter to provide their immediate care and to stock the foster home, these kittens would assuredly have died.”

They went on to say, “As kitten and puppy season settles upon us, we at LifeLine Animal Project are grateful to GreaterGood and its partners for this in-kind donation of critical feeding supplies! Our lifesaving is that much more successful when we can be sufficiently stocked to prepare our foster homes to provide necessary care for these most vulnerable kittens and puppies.”

Hoofbeats and Pawprints Rescue, based in Mississippi, shared how they used the donated formula and supplies to save an orphaned kitten named Carrots, a puppy named Howie, and 10 litters of kittens and puppies. 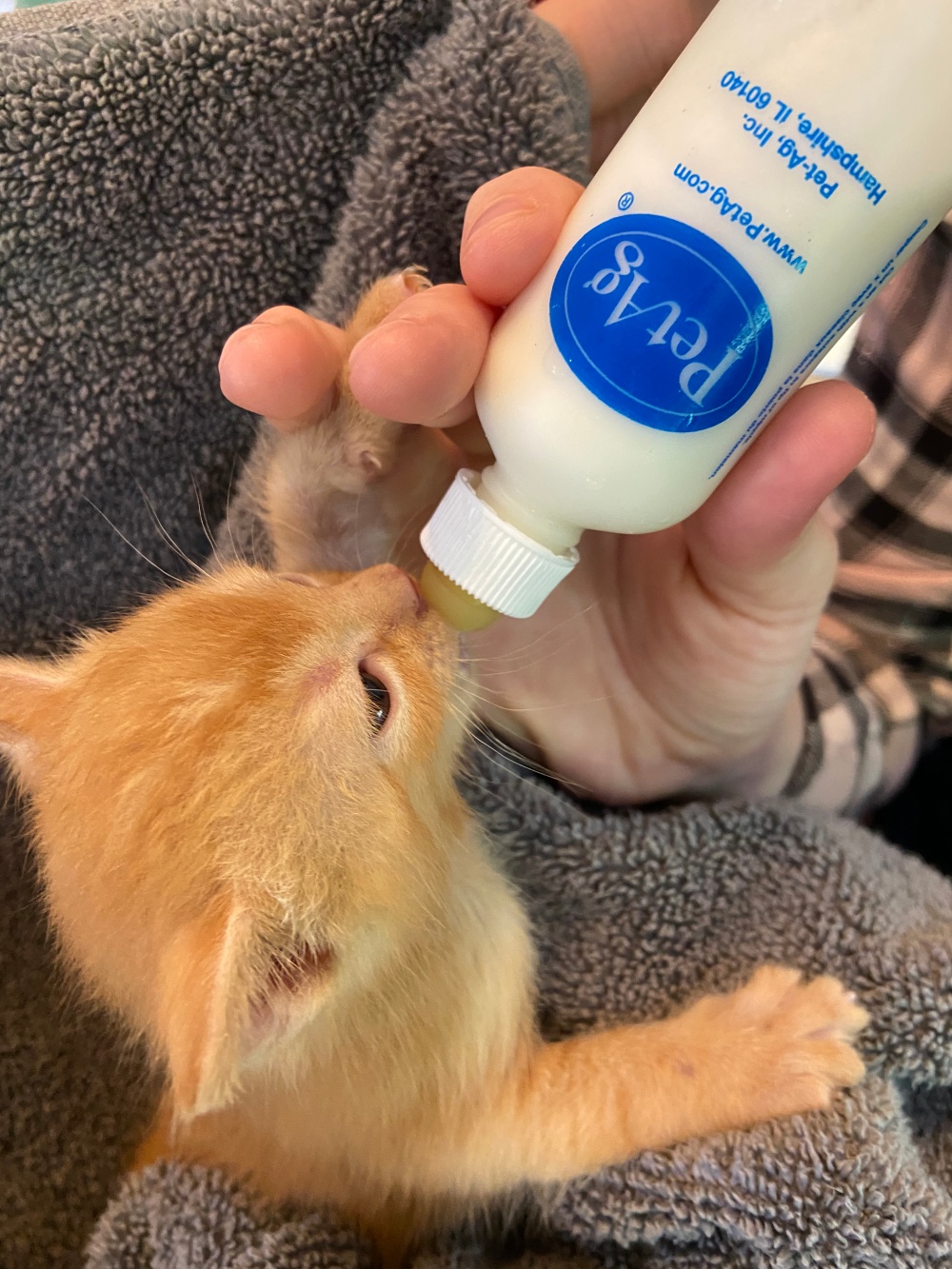 “That adorable little orange kitten’s name is “Carrots.” He’s actually a current foster of mine and he has already been on several transports because I needed to feed him :grin:. He’s just over 4 weeks old now and has graduated to living in my office and receiving only 2 bottle feedings a day and nibbling on kitten food in between. His history is that his mother was hit by a car and killed when he was about a week old and the owners tried to raise the litter by feeding them Borden (cows) milk and they knew none of the basics of keeping kittens warm or stimulating them to void.”

Howie’s mother was too ill to care for him, so the shelter took over. 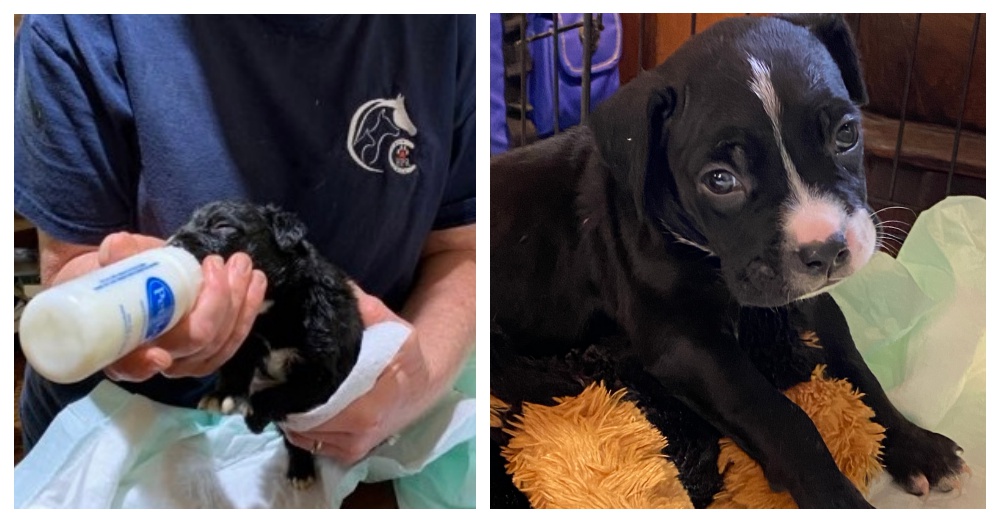 “He was only a week old when his mother became ill and unable to care for him. Howie was bottle raised on Esbilac puppy formula and PetAg bottles that HPR received as part of a grant of shelter supplies from Greater Good Charities. He was able to get the good start he needed and he thrived and grew into a healthy 20 lb pup that still loves the stuffed toy dog named Fudge that he cuddled with as an infant.”

The litters of kittens and puppies continued to arrive, but the shelter was prepared.

““We’ve had 10 litters of kittens and puppies that required bottle feeding since receiving the grant that contained KMR and Esbilac Powder, nurser bottles, and Bene-Bac Gel. Having the bottles and infant formula on hand and ready for use has been a very valuable resource for our program. Most of those bottle fed litters were large and needed the formula for 3 weeks, so having high quality infant formula like KMR and Esbilac Powder available for them freed us to spend our funds on other needed supplies.”

“Puppy and kitten formula is akin to gold during the spring and summer in the shelters. We are so grateful for this donation,” Palm Valley Animal Society told us.

The Texas shelter was able to save a litter of orphaned puppies and numerous newborn kittens thanks to the donation of formula and bottles. 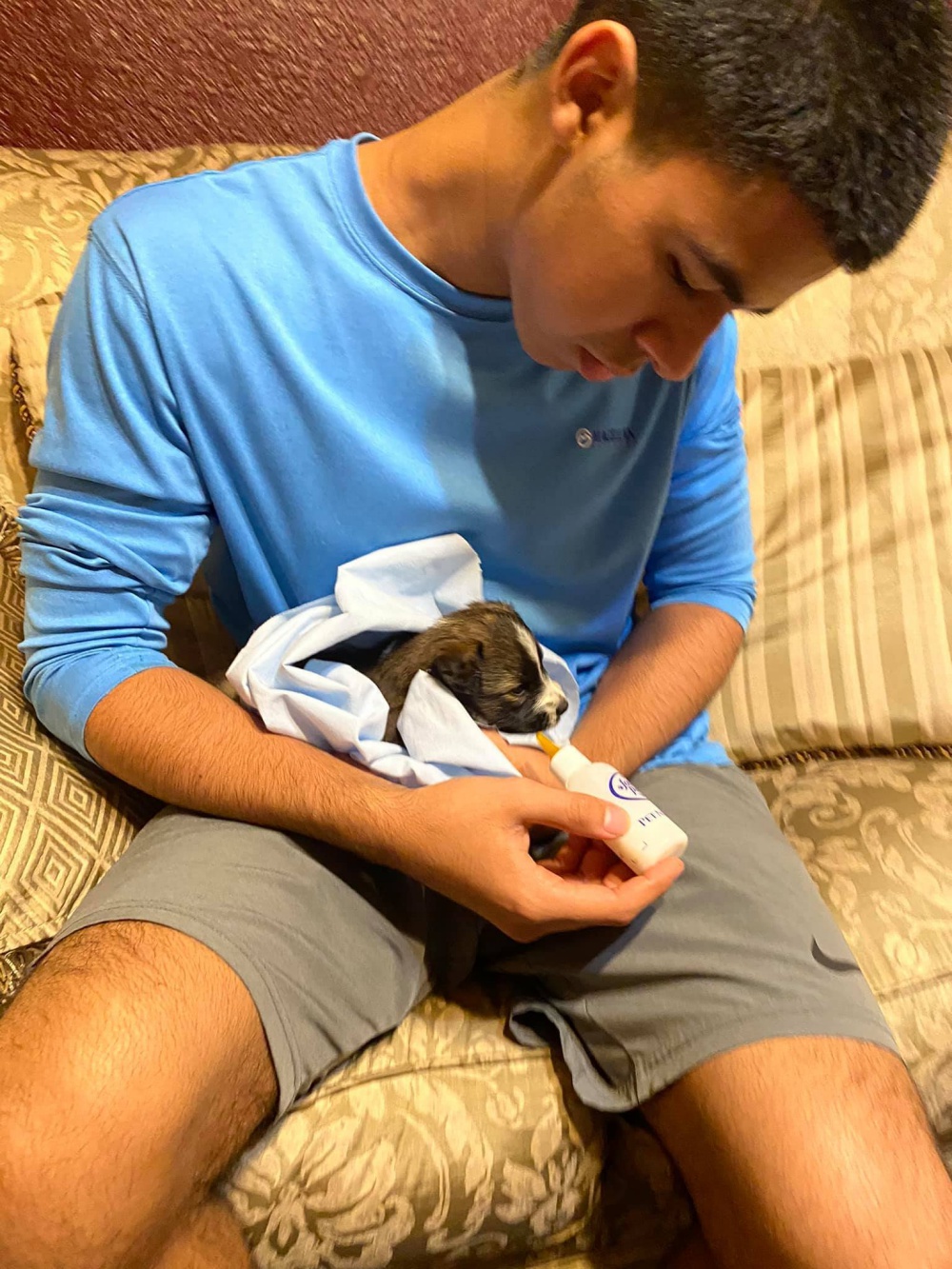 “Late in the day, we had an entire litter of puppies come to the shelter. They were about three weeks old, so they needed to be bottle fed, an exhausting job that just isn’t possible when shelter staff must also manage the care for hundreds of other animals. While medical staff got them stabilized with their first feeding, our foster and rescue team stepped up. Within an hour, we had a rescue that was willing to take the babies on, but they couldn’t come pick them up until the next day. With around the clock feeding necessary, we reached out to fosters for an overnight. Just as quickly, we had a great family with three kids step up to have a sleepover with the babies. All the kids got a chance to bottle feed them and coddle them. The following day, the rescue group came and picked them up. It’s so nice to have formula and bottle supplies on hand for our foster program to use so we can move swiftly in getting animals into safety.”

Newborn kittens require specialized care and must be bottle fed ever couple of hours. Thankfully, kindhearted fosters step up to help. The shelter described how the donation makes it easier on foster homes. 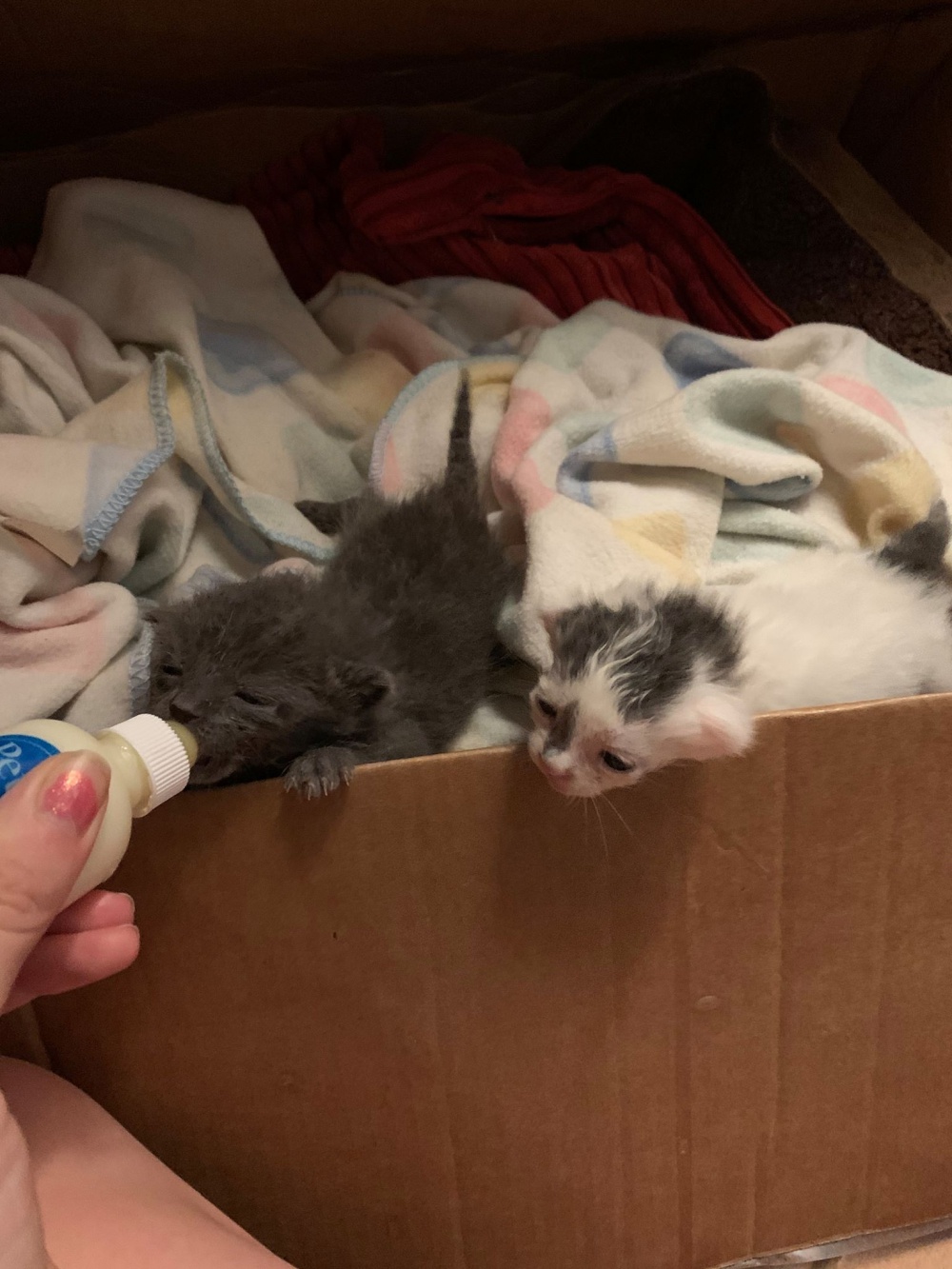 “Can you imagine waking up in the night to hear four or five meowing baby monsters needing all of your attention? Our foster homes are critical to our success, and our foster homes who take neonate kittens to foster are some of our biggest superheroes. Newborn kittens need to be fed every 2 hours for the first few weeks of their lives. Additionally, they need to be kept at an ideal warm temperature, and if just one part of the stars are not aligned, the kittens can fade very quickly. Recovering a fading kitten is extremely difficult, so the perfect balance of good nutrition and lots of love and attention is essential and saving these lives. Our foster homes keep neonate kittens sometimes for just a few nights until they can go to rescue, but sometimes they keep those kittens in their homes until they are large enough to be put up for adoption. That can be up to eight weeks, which is a lot of nights awake mixing bottles of formula! The donation of formula and bottles is just one checked box that we don’t have to worry about when asking our community to really step up and help save lives.”

A mama dog named Emmy Lou and her 10 newborn puppies survived and thrived thanks to the donations. 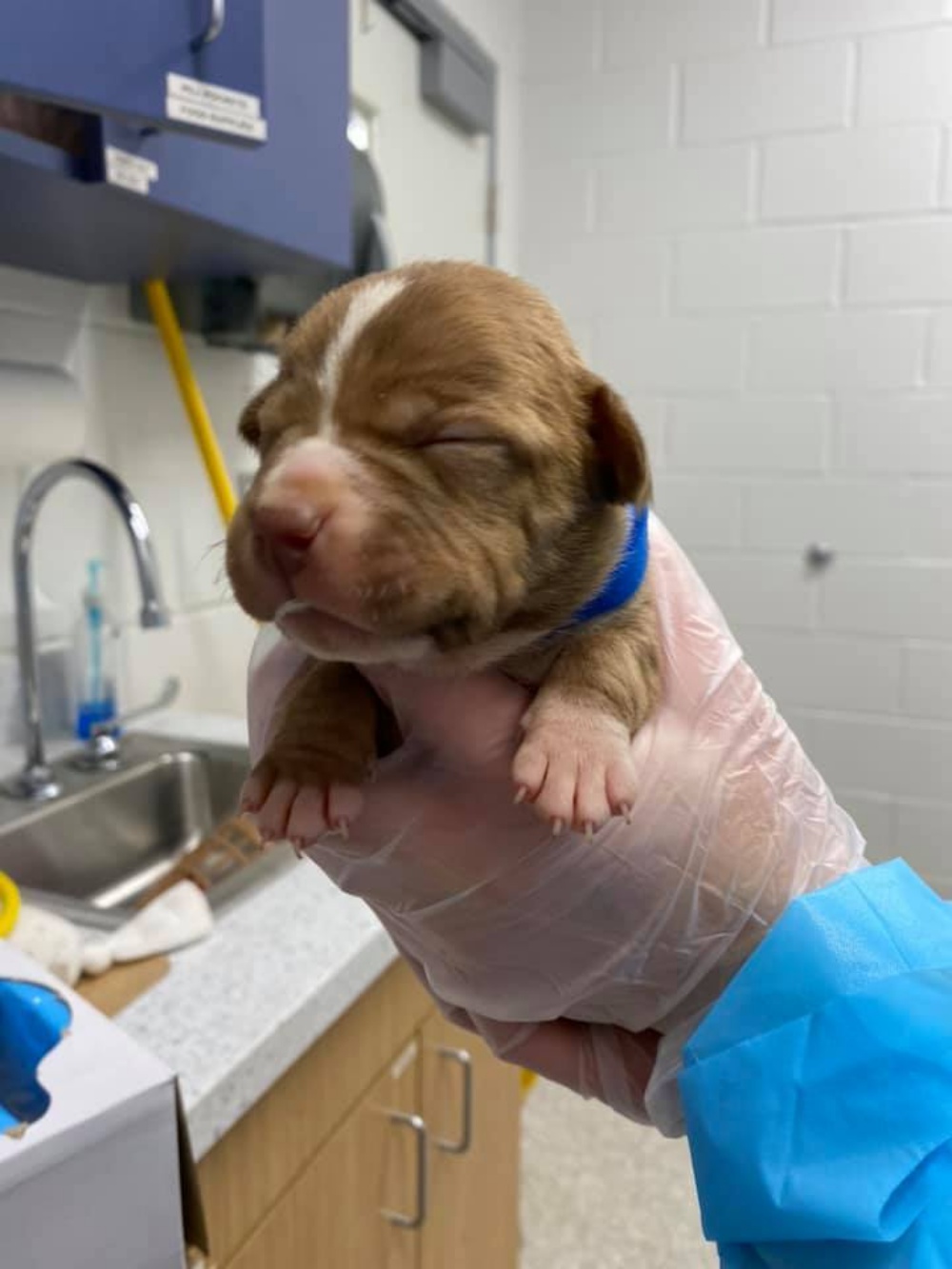 “Emmy Lou was brought in by animal control, severely underweight along with her ten (10) one- week old puppies. Due to her condition, we worried that she would not be able to produce enough milk to adequately feed her extra-large family. By providing her foster with the additional supply of bottles, formula, and blankets- we were able to ensure the ongoing health of this sweet mom and her puppies. Emmy Lou was adopted, as were all 10 of her puppies!”

“These 2 week old tabby sisters, named Mariah 1 and 2, arrived to BARCS cold to the touch, after being found by a concerned citizen. A foster home who was willing to provide round the clock care was quickly found, and supported with GreaterGood’s donation of KMR formula and bottles.” 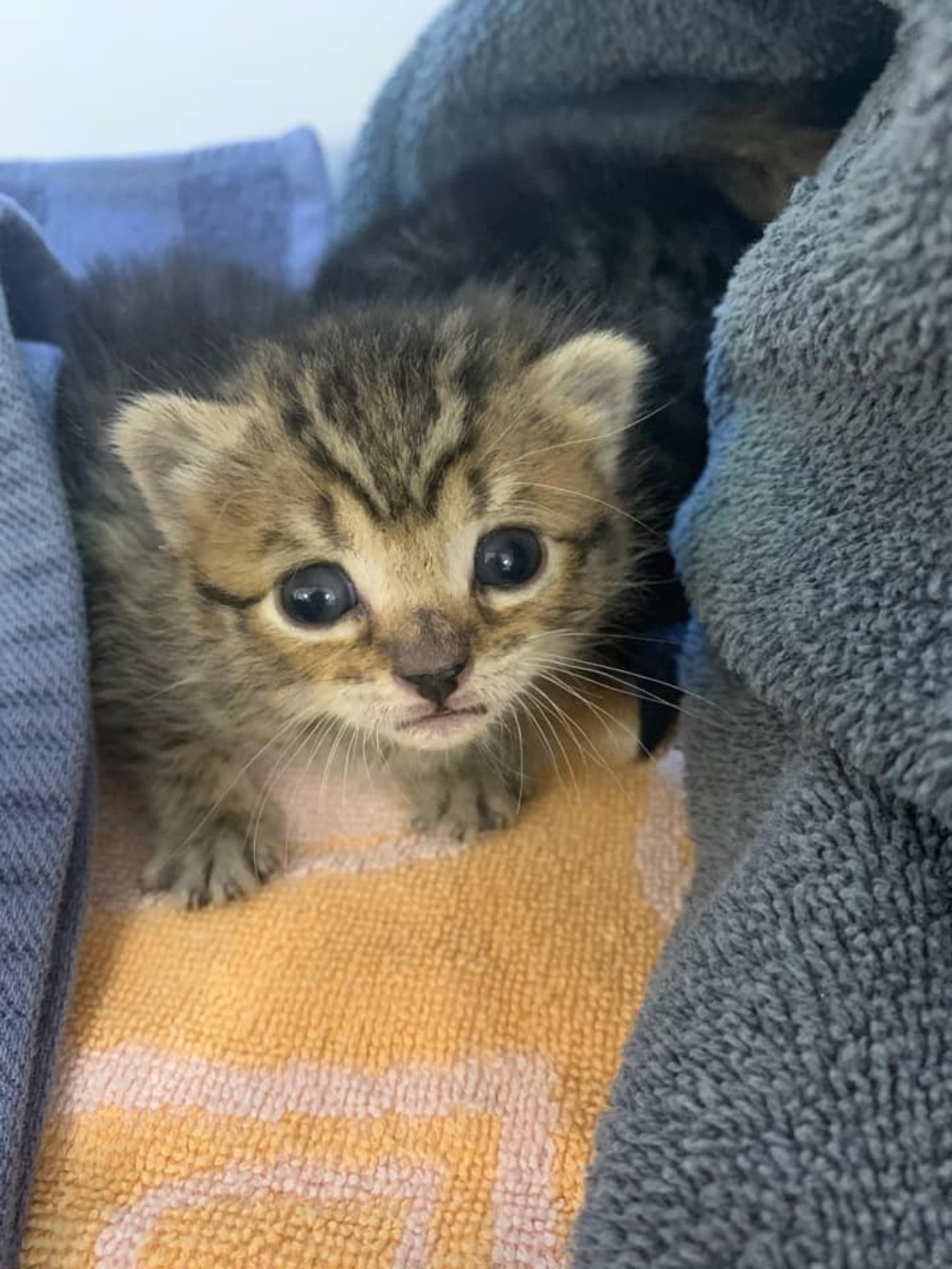 Baltimore Animal Rescue and Care Shelter is grateful for the support and the much-needed formula and bottles.

“Kitten season is just beginning in Baltimore and these supplies will enable our bottle baby fosters to have enough formula and bottles on hand as the kittens begin to pour in. This in-kind donation allows us to divert funds that we would have expensed on formula and bottles to where it is most needed- medical care for these vulnerable babies.”

Wisconsin Humane Society, like all other shelters and rescues, is entering kitten season and trying to prepare for the influx of newborn kittens.

“Foster parent feeds a neonatal kitten formula. With the help of foster parents, kittens receive bottle feedings, cleaning, assistance with elimination, socialization, nurturing and constant warmth until they are old enough to return to the shelter for adoption.” 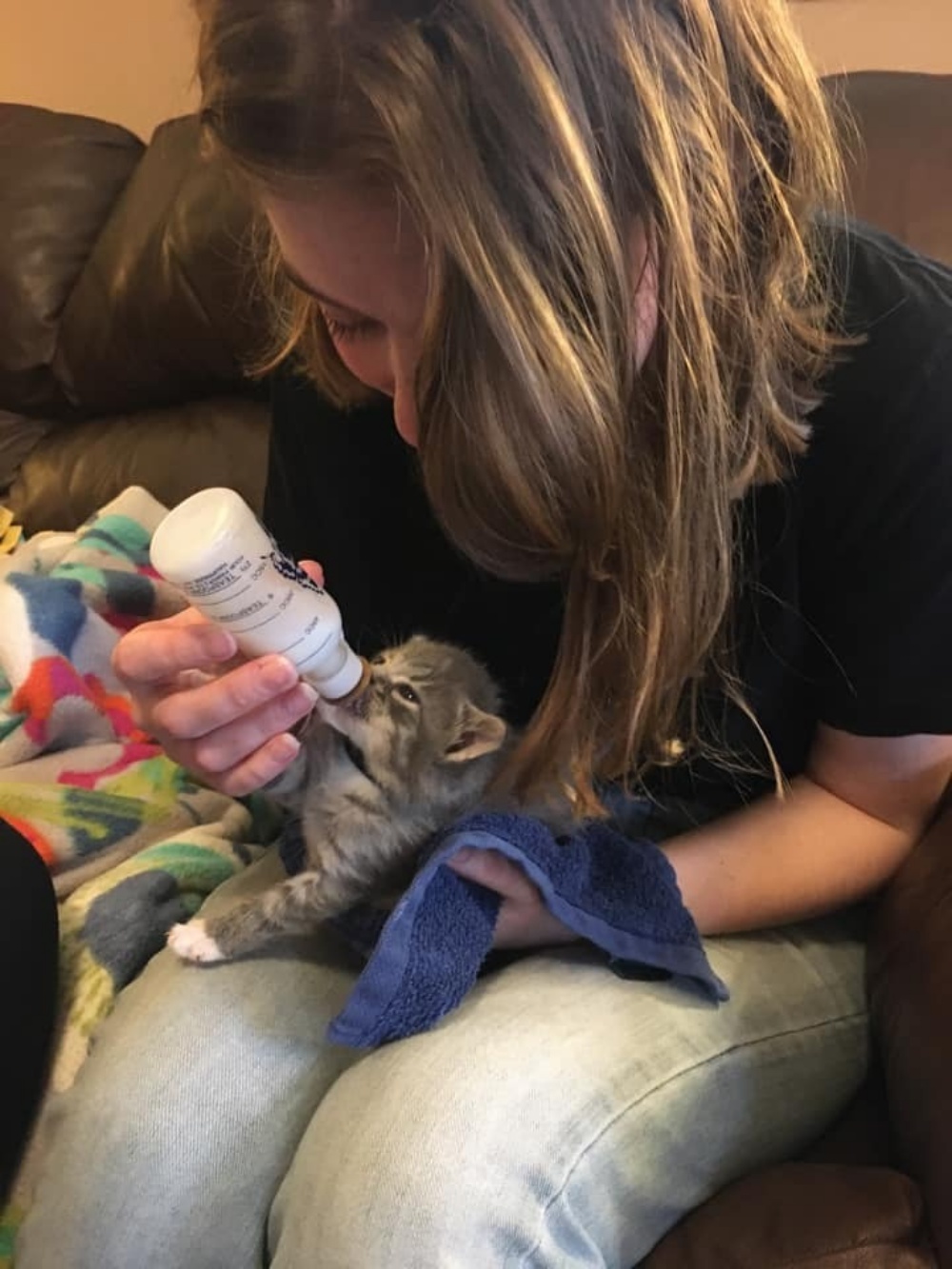 Thanks to the donation of Life-Saving Formula Kits, fosters are able to properly feed the little felines until they are old enough to find forever homes.

“With the onset of our peak intake season, these supplies were put to use for neonatal kittens heading to foster as well as to prepare kits for future arrivals.”

None of these rescues would have been possible without your support, so thank you! All the rescued kittens and puppies send their love and kisses, too.