Dogs come in all different shapes and colors and they’re all adorable. But the internet is currently falling in love with Blaze, a Finland-based Labrador with a distinct black and white speckled coat.

His picture was uploaded to the popular Facebook group, “Dogspotting Society.” There, the picture received tons of attention from dog people all over the globe. While this 10-year-old Lab’s coat is quite unique, it wasn’t always that way.

Just over a year ago, Blaze looked like any regular black Lab. However, his owner, Santeri, then noticed that there was a white patch that began to develop on his ear. The patch then began to grow, spreading across the dog’s body, making his shoulders and head more white than black.

The reason? Blaze has vitiligo. The condition is more common amongst people but can affect animals as well. Vitiligo is a condition characterized by the skin’s loss of pigmentation. But while Blaze’s fur loses its color, there is no need to worry. He’s completely healthy. 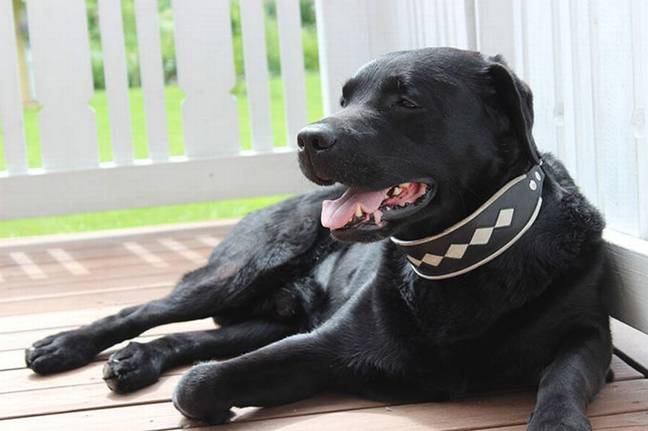 Blaze’s owner, Santeri, has revealed that his appearance has led to a few new nicknames.

Santeri shared to Bored Panda, “The white color began spreading from a small spot on his ear. Interestingly, all of his brothers and sisters still remain single-colored. He is 10-years-old now, and has received a few nicknames because of his age, like ‘the old man’ and ‘the funny old man.'”

However, Blaze is truly only as old as he feels, since this “old man” still very much loves to get out and explore whenever possible.

Santeri said, “Blaze is a healthy and very energetic guy. He’s always ready to join you wherever you go. He likes to make people happy and put a smile on their faces.”